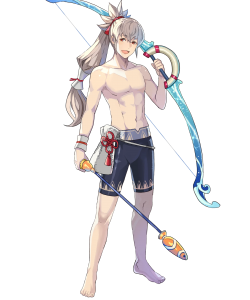 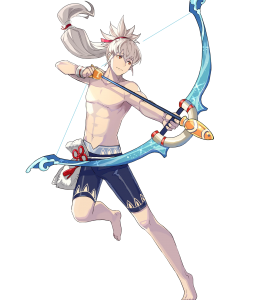 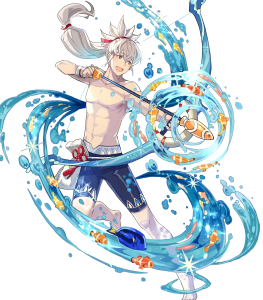 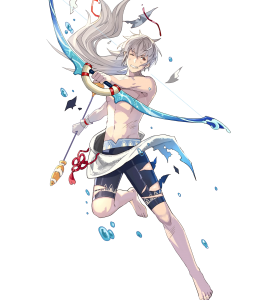 With his amazing offenses but low defenses, Summer Takumi is practically designed for a Firesweep Bow set.

The Firesweep Bow is a powerful offensive weapon that nullifies all counterattacks. This is at the downside of Summer Takumi himself not being able to counter on enemy phase. When positioned correctly, this allows Takumi to attack safety with no fear of retaliation. Either an Attack or Speed asset will help Takumi offensively. Any defensive flaw will work since defenses are not important with Firesweep, but try to avoid a HP flaw in order to maintain Summer Takumi’s Arena score. Any Assist can work. Reposition is a great choice for fliers since very rarely will terrain get in the way of using it. Moonbow makes for a great Special as Takumi can potentially activate it every round of combat with Heavy Blade. Other than that, Luna is another great choice that can help Takumi with high defense enemies.

Atk/Spd Solo is a perfect fit for the A slot, granting Summer Takumi with a huge offensive boost when he has no adjacent allies. Life and Death is a cheaper but still very strong alternative. As Summer Takumi can attack without fear of counterattack, maintaining his defensive stats isn’t very important, so Life and Death is a natural fit. Fury can also be used if one lacks the fodder to give him either of the aforementioned skills. For the B slot, both Chill Def and Chill Spd make for great options. Chill Def can help Summer Takumi with high Defense foes while Chill Spd can help Summer Takumi with securing follow-ups against faster foes. Odd Atk Wave will give Summer Takumi a free six point boost to Attack every other turn, giving him a raw damage boost and helping him to activate Heavy Blade. Alternatively, he could also run Even Spd Wave for a Speed boost every over turn. Outside of these skills, a lot of different C slot skills can work well. If Summer Takumi is alongside other fliers, a flier buff such as Goad Fliers is recommended.

For his Sacred Seal, Heavy Blade grants Summer Takumi with two Special cooldown instead of one per attack assuming his Attack is higher than the opponent. Thanks to his amazing Attack and Speed, Takumi can absolutely put this to good use and he can potentially activate Moonbow every round of combat. Alternatively, either an Attack or Speed Seal will help Takumi offensively.

Summer Takumi is also a great user of the Brave Bow.

The Brave Bow is a powerful weapon that allows Takumi to make an immediate second attack after his first, potentially allowing for four attacks if he naturally doubles his opponent. Summer Takumi will want either an Attack or Speed asset to help him defensively, with either Defense or Resistance as the flaw. His Assist is open to player choice. Reposition is a great choice for any Flier thanks to their mobility, but Ardent Sacrifice can also be considered if Summer Takumi is running Desperation since a single use will put him into Desperation range. Luna makes for a fantastic choice of Special, helping Summer Takumi with tankier enemies and potentially activating every round of combat if he consistently doubles his opponent.

For his A slot, Atk/Spd Solo grants Summer Takumi with a huge boost to his offensive stats when he has no adjacent allies. Alternatively, Swift Sparrow grants Summer Takumi with a similar but lower offensive boost whenever he initiates combat. Life and Death is a cheaper alternative to these two skills that gives a slightly larger boost to Attack and Speed, though at the cost of Summer Takumi’s already low defenses. For maximum budget, Fury is a good option that boosts all of Summer Takumi’s stats. Chill Spd, while expensive, will help Summer Takumi to secure double attacks against faster opponents. Desperation is a strong option too, allowing Summer Takumi to perform any follow-up attack immediately after his first attack should he be below 75% HP.

Even Spd Wave grants Summer Takumi with a Speed boost every other turn, helping him greatly with doubling opponents. Odd Atk Wave is a strong alternative that grants Summer Takumi with an Attack boost every other turn instead. Outside of this, many different C slots are available. Skills such as Hone, Fortify, and Drive skills are safe general choices, though a Flier Buff is recommended if Summer Takumi is alongside other fliers. For his Sacred Seal, either an Attack or Speed Seal will add some extra damage or doubling potential to Summer Takumi, improving his overall offensive presence.

Thanks to his good base kit, mainly in the form of his great weapon, Summer Takumi can be built with only cheap Skill Inheritance for a budget but effective offensive archer.

As always, Summer Takumi will want either Attack or Speed as his asset to help with his offensive potential. Either Defense or Resistance will work well as the flaw. The Fishie Bow is Summer Takumi’s default weapon and a strong one at that, granting him the Desperation skill, a prime B slot choice for archers. His Assist slot remains open, though Reposition is recommended in general thanks to Takumi’s flier mobility allowing him to make great use of it. Either Moonbow or his default Special Glimmer will make for strong choices thanks to their low cooldown.

Fury is a great choice especially since Summer Takumi comes with it by default, granting a boost to all of his stats and the recoil damage also helping him to reach Desperation range. With Desperation on his weapon, recommending a cheap B slot is actually somewhat tricky. The breaker skills all make for good choices to give Summer Takumi extra coverage. Swordbreaker is a great choice which helps Takumi against the faster sword fighters such as Ayra, Karla, and Mia. If another breaker works better for you though, go for it. The C slot is open, with skills such as Drive Spd or any Hone or Fortify being good general choices. His default Odd Res Wave is a serviceable choice, though Summer Takumi himself won’t benefit greatly from the Resistance boost. If alongside other fliers, Summer Takumi will want a flier buff such as Goad Fliers. One should consider what boosts their team needs though before deciding. Finish off this set with either an Attack or Speed Sacred Seal to help with Summer Takumi’s offensive potential.

Takumi, The Prince of Hoshido, has joined us once again, this time in swimwear and ready for a day at the seaside. Following in his older sibling’s footsteps, Summer Takumi has also decided to climb atop a Kinshi and take to battle in the skies as a flying archer. With solid offenses and low defenses, Summer Takumi is an offensive powerhouse.

Possessing the same strong 35/35 offensive spread found on Bridal Cordelia, Summer Takumi hits hard and hits fast. Unlike Cordelia however, he also comes with all the benefits of a typical flying unit, such as unparalleled mobility and access to flier buffs. This also does come with the inherent downside of being weak to other archers.

In terms of other downsides, Summer Takumi has lackluster defenses on both ends with 21 Defense and 19 Resistance. He’ll take high damage from both physical and magical attacks, but his good HP of 40 gives him good protection from being defeated in a single hit, unless the foe happens to be an archer.

All in all, Summer Takumi is an amazing archer with a lot of power. With a Firesweep Bow or a Brave Bow, he’ll be able to rain pain from above on his unfortunate foes. Maybe he’s even outdoing his sister in this regard...

With 35 Attack and 35 Speed, Summer Takumi has the exact same offensive stat spread as Bridal Cordelia. As Cordelia herself has proven in the past, this stat spread is lethal. It is a perfect mix of raw damage and doubling potential that makes Summer Takumi such an offensive threat with any of the different offensive bows he can wield.

Not only does Summer Takumi possess this amazing offensive stat spread, he also has the utility of being a flier. With no terrain restrictions like forests or trenches and being able to pass over otherwise impassable terrain such as water and cliffs, Summer Takumi’s mobility is unparalleled compared to all other archers besides Hinoka. He can also enjoy access to flier-specific buffs such as Hone and Goad Fliers.

For those on a more stricter inheritance budget, Summer Takumi already comes with a good starting skill set. His default weapon Fishie Bow comes with the Desperation skill built in, one of the prime B slot skill choices for offensive archers. He also comes with Fury by default, a popular A slot that boosts all stats. His default Special Glimmer is also a good choice for him thanks to his high Attack. His new C slot, Odd Res Wave, isn’t the greatest on him since his Resistance is so low, but it’s still better than nothing. All in all, a good base kit that is all entirely usable on him.

When it comes to defensive capabilities, Summer Takumi is certainly lacking. With 21 Defense and 19 Resistance, Summer Takumi will take considerable damage from both physical and magical attacks. Luckily for him, his good HP of 40 means he has enough bulk on both ends to consistently survive a single attack from opponents, so he’s not liable to being OHKO besides if he is attacked by an archer.

IVS: boon: +atk or +spd / bane: can be anything but atk or spd
I use this build on my flier ranged team (summer takumi, flier nino, blade tana and Ninian). This build is amazing with his budget skills and was VERY useful in chain challenges. The idea is that takumi takes damage from fury and activates desperation in his bow and escape route on the B slot, because then he can run to any ally to help them if they don’t have more actions, to reposition them or any other thing. Since he won’t be tanking almost anything, fortify fliers is a good choice for C slot as he can boost the teamates tank capabilities (or in my case boost my blade Tana heheheh).
The seal is flexible, though I like running drive spd in the team I use him.

Summer takumi is a great striker unit. This build turns him into a PVE assassin. He's great in TT. Fury gets him low enough to use escape route and he can pick people off from anywhere. His speed is high and with a speed boon and bluffs he can double most threats.

His biggest counter would be high defense units with distant counter.

He can use any c skill or sacred seal. I sometimes run double savage blows, but speed smoke, heavy blade, and flier buffs are all viable options.

I gave him olivia yt as a support.

Fury gives him a decent bst so +10 wouldn't be as bad a score as a brave bow user in arena.

Cyl 4: who to pull first
Ok, so there are actually a lot of good units out here and I’m not sure which one I’m…
FREYR
image1125×2436 604 KB FREYR IS A BEAST!!! I want to see his transformation IS PLEASE…
New Heroes CYL4 (A New Future)
115 posts - 26 participants Read full topic
If Edelgard drank Vodka
Just a little funny I found when I was researching Tara Platt and her voicing roles. …
Altena Time
So I finally pulled a +Def Altena. I heard she is a great defense unit. The only thing…
Read More