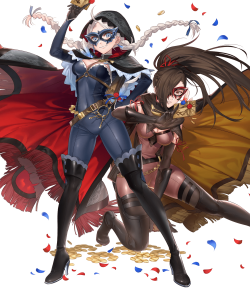 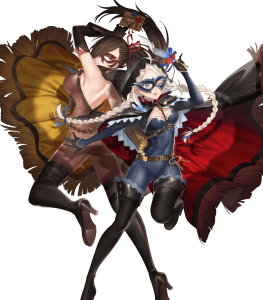 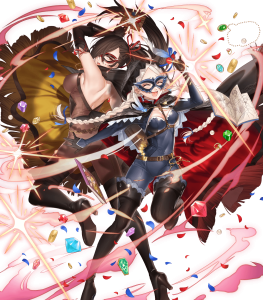 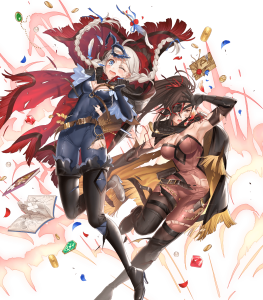 * WE * are Looking Disrespectfully (Wings of Mercy Beacon)

The Shadowy Figures having a baseline of 37/43 Atk/Spd (in addition to a perpetually active +9 Atk/Spd boost and the ability to deal adaptive damage from their weapon) already places them at a stellar starting point relative to others: while they may not have any means of bypassing follow-up prevention, just one strike alone is going to leave a pretty hefty dent. This is amped substantially, however, through Shadowy Quill’s unique damage-boosting mechanic.

The 【Canto (Recall)】effect of Thief Nina and Kagero’s Shadowy Quill adds another layer of dimension to their overall gameplay, making the pair highly mobile by yeeting themselves back to their starting position after making an attacking or Assist action every turn.

Paired with their dagger cavalry status, this draws immediate parallel to the notorious Yuri and his (dis)Honorable Blade, though the difference is that Nina/Kagero’s Canto isn’t limited by a set number of spaces — as long as Canto Control isn’t in play, they will always warp back to their starting position no matter how much they actually moved. This is, needless to say, extremely powerful in the player’s hands, especially when paired with skills like Wings of Mercy and Disarm Trap that allow for simpler maneuvering, and helps largely circumvent their poor bulk — it’s hard to punish extending too far into enemy range when nothing is “too far.”

This easily places the Shadowy Figures’ mobility leaps and bounds above any comparable cavalry units, and this is further compounded by the effects of their Duo Skill as listed below.

Thief Nina and Kagero’s ranged cavalry status is a natural complement to the hyper-offensive lean and 【Canto (Recall)】effect built into Shadowy Quill, as the pair can easily assert Player Phase dominance by an effective five-tile range to maximum effect (as they can go as far as they like without worrying about overextending). Furthermore, access to Disarm Trap (among other neat class-exclusive skills like Atk/Spd Catch) and neutral matchups across the board from the wonder that is being colorless helps round out their overall flexibility and ease-of-use.

Having Kagero by her side does more favors for Nina than simply making her look prettier, with her status as a Duo Hero granting some accessory benefits. For instance, their scoring potential in Colosseum-related modes is drastically elevated as their BST is counted as a whopping 195, they can enable certain structures within Aether Raids, and they have access to a Duo Skill.

While Duo Skills have been rather… diverse in how useful they actually are, Thief Nina and Kagero’s is extremely synergistic with their preferred playstyle and makes them even more of a mobile nuke on turns (or maps) it is accessible: it immediately grants them another space of movement for an effective six-tile range, and any foes in their cardinal directions or who have a penalty active are debilitated with inflicts Atk/Spd/Def/Res-7 and the【Panic】 penalty. The debuffing portion of this skill makes maximizing their damage potential child’s play — especially when running Nina/Kagero alongside allies who passively apply global debuffs to avoid the cardinal direction limitation — and having so much movement is genuinely terrifying

With such an intense fixation on aggressive play built into every aspect of their kit, it shouldn’t come as too much of a surprise that their overall physical bulk is as horrible as it is — with only a mere 56 physical bulk as a baseline and no form of Def enhancements in their weapon, Nina/Kagero are susceptible to being one-shot by a stiff breeze and largely rely on OHKO’s and their retreating options to operate.

It’s genuinely not too difficult to find units nowadays that can output considerable damage considering how overwhelming PRF weapons have gotten; however, what makes Thief Nina and Kagero truly unique is their ability to combine such prowess with little repercussion due to Canto and Disarm Trap, similar to direct comparable Yuri. While relying on 【Canto (Recall)】isn’t a bad thing in itself, the introduction of the Hex Trap and 【Canto Control】 make Nina/Kagero’s strategy much less foolproof than once before — and falling prey to either such mechanics makes it pretty likely that they’ll just be defeated quickly.

Unit can move 1 extra space. (That turn only. Does not stack.) If any foes are in cardinal directions of unit or【Penalty】is active on any foes, inflicts Atk/Spd/Def/Res-7 and【Panic】 on those foes.  Once used, Duo Skill cannot be activated again right away. At start of every third turn, if Duo Skill has already been used, unit can use Duo Skill again.  【Penalty】 All effects that last "on foe through its next action." Includes penalties inflicted by a skill like Panic or Threaten and negative status effects (preventing counterattacks, restricting movement, or the effects of a skill like Triangle Adept or Guard).  【Panic】 Converts bonuses on target into penalties through its next action.