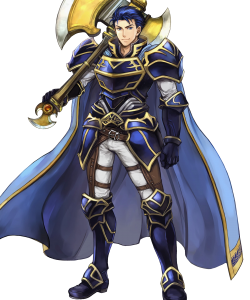 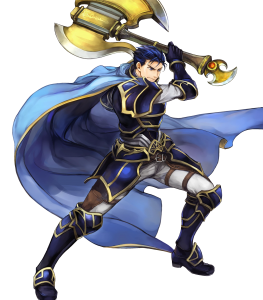 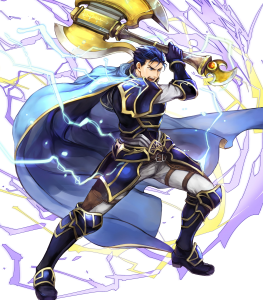 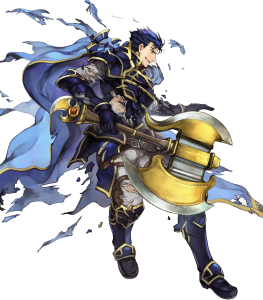 When the Dad Jokes Come a-Boomin' (Near Save Tank)

Pent of Reglay bestowed much of his skills and wisdom to his fellow Marquess of Ostia, resulting in a Legendary remixed personal skill that resembles the playstyle of his fellow Count: the ability to lower the cooldown of other allies AND himself if their Special cooldown is completely uncharged. In layman's terms:

Saying nothing of the vast possible benefits this has for the rest of your team members (but for a few quick examples, running this with Yuri also running his native Time's Pulse results in an instantly ready Luna, and already threatening units like Valentines Líf gets access to cooldown acceleration they couldn't have before), Legendary Hector now has something of a pseudo-Slaying weapon effect. This allows him to fire off higher-grade Specials with more convenient frequency after Ostia's Pulse activates, which is reminiscent to the classic Slaying weapon + Special Fighter combination that's a gold standard on other armored units.

Though these effects are locked behind a teambuilding condition, it's pretty much no sweat at all if you've been using the Tactics skill line up to this point. For the uninitiated, this means that as long as you run a mixed movement type team with no more than two of each type (infantry, armor, flier, and cavalry), Ostia's Pulse will always reliably activate each turn.

Legendary Hector's unique and preferred weapon offers a simple but very effective card trick: it effectively denies most enemy units the ability to hit him twice in one round despite his low Speed. Though this effect is achieved only by having an ally within three spaces, said condition is very easy to meet, especially in enemy phase where Hector is typically parked near other teammates for general safety and skill boosts. With the exception of foes with skills with automatic follow-up (i.e. Bold Fighter, Þjálfi, etc) and Null Follow-Up, Thunder Armads offers some gamebreaking follow-up manipulation on most matchups.

Additionally, under optimal and similarly easy conditions, Thunder Armads grants 40% damage reduction against the enemy's first hit as well as a -10 Atk/Def incombat debuff against the enemy, which does well in fortifying Hector's general performance and making him competitive for modern needs. A simple but formidable refinery update indeed.

At the general cost of awkward Resistance and Speed—which is rarely an issue thanks to a variety of tools and skills (like the stat swings of Thunder Armads and the various benefits of the Fighter skill line) at Hector's disposal—Hector benefits from nice stat distribution, and all stats are perfectly malleable for casual and spot investment.

Without considering all the legwork Thunder Armads already offers, Hector's base 40 Attack, in particular, is still pretty high despite being a tad crept by newer units, giving him little shortages in damage. His high base 47 HP and sufficient 38 Defense also make the majority of physical matchups comfortable as long as Hector obeys the finer points of follow-up manipulation — use Thunder Armads' follow-up denial well, and don't push it against units with auto doubles or Null Follow-Up.

Even after three generations, Hector's status as an armored unit affords him a high overall stat total and thus great (but not totally optimal) scoring potential in Coliseum modes. This coincides well with his Fire Legendary status; he can contribute upwards of six additional points to your scoring range on Fire seasons, assuming his accompanying team members are also conferred with the Fire blessing.

In Aether Raids, he lends himself sufficiently to the typical composition of both Offense and Defense teams thanks to Ostia's Pulse II's supportive qualities. As long as it's Fire season, he also absorbs the blessing benefits of any present Mythic allies, allowing him to pull some combative weight every now and then. Additionally, he takes great advantage of all the Fighter skills this movement class has to offer, and even comes with none other than the very optimal Crafty Fighter from his Legendary Remix.

Legendary Hector's debut timing ages a bit awkwardly as he lacks some defensive luster that recently-released armored units are renowned for thanks to their high mixed bulk. Specifically, his base 26 Resistance makes him very vulnerable to heavy magic punishment. While factoring in Thunder Armad's follow-up denial and -10 Atk debuff, even that can always be overcome with Null Follow-Up or some form of automatic enemy double attack.

Unless you take up specific building decisions like running a maximum investment Speed build, Hector also makes little attempt to naturally alleviate the aforementioned problems with his also-exploitable base 23 Speed.

Ostia's Pulse II Not As Consistent as a Slaying Weapon

Ostia's Pulse II gives Hector fancier Specials to work with, but it pretty much has the same issue with your average Time's Pulse user: the CD-1 applies ONLY at the start of every turn as opposed to a permanent cooldown discount. If Hector is taking on multiple enemies in one turn, the issue starts being obvious; for example, Bonfire can activate instantly on one counterattack after the Pulse activates (with some form of acceleration like Steady Breath), but in any combat after that, that stops being the case since it's reset at 3 (so 3 CD → 1 CD) rather than 2 (2 CD → readied 0 CD Bonfire).

Generally speaking, if you're using Hector, try to take care not the extend Hector's combat too far outside of his first battle per turn.

A consistent headache when using him as your Fire legendary unit in Arena, Hector's one-space movement makes him very unlikely to avoid disadvantageous matchups without movement support. Brace for impact if said matchups involve a superiorly-ranged or armor-effective weapon like Studied Forblaze (and it's REALLY inconvenient that Hector shares a season with his powerful cavalry-clad daughter) or New Dawn, respectively.

Being a Fire legendary means that while Hector massively benefits you and similarly attuned units during Fire seasons, using him optimally involves binding him to that season only. In non-Fire seasons, he stops receiving Mythic blessing effects in Aether Raids  — something he needs in order to strengthen himself and give you better Lift gains — and cannot improve other allies' scoring in Arena-based settings.

Additionally, a lot of recently-released axe armors, especially Brave Edelgard and Valentines Gustav, boast more optimized competitive perks thanks to stronger stats and weapons, and while Legendary Hector is certainly still very strong especially after his Legendary Remix and weapon refinery, fair differences can be seen in overall tanking and other utilities. Compared to those two aforementioned axe armors in particular, Hector lacks reliable cooldown reduction and self-sufficient movement boosts.

Noontime synergizes with special fighter to make every hot hector tales activate noontime. If hector is always on the enemy phase, then every hit will always return noontime, combined with his weapons effect of limiting enemies to a single hit, and quick repost allowing him to make an automatic Follow-Up attack.

Res boon works very well, as he is able to bait an enormous amount of mages and slaughter them, especially when he is buffed.

The combination of BF with QR3 seal is excellent. He is covered for follow up attacks and offense and defense. His HP rarely falls under 70% so QR is usually active.

Hector is murder in a can from the word "Go" with only his base kit plus an easily-obtained Seal and Assist, but is anyone really surprised?

Although being a little beat weaker on the player phase, Hector’s base build is actually already quite fantastic for the enemy phase.

The choice of IVs and weapon should remain the same, as the only real difference is the lack of Bold Fighter.

Bonfire is the preferred choice of Special, and will activate every fight Hector is initiated on thanks to Vengeful Fighter. Draconic Aura is a fine option if Bonfire is not available.

Distant Counter should be kept to allow Hector to counter ranged units. When combined with the Distant Def seal, Hector will be able to decently tank some mages as well.

Vengeful Fighter will work great on Hector, allowing him to both double attack any unit that attacks him and activate a 3 cooldown Special such as Bonfire or Draconic Aura. Although not as reliable or potent, Vantage can be an interesting alternative if one does not wish to run Vengeful Fighter, or wishes to simply run a Quick Riposte seal instead.

Ostia’s Pulse is great and really only needs to be changed out if Hector is being run on a full armor team, in which case he will want skills that can support his team appropriately such as Armor March or Hone Armor.

Hector can take Distant Def or Close Def as a seal to increase his bulk while also increasing the amount of damage dealt by Bonfire. Quick Riposte can be taken if Vengeful Fighter is not taken for the B slot.

Hey look a meaningless achievement I never thought I would come close to getting
I always used to look at those people who somehow saved up to max feather count like…
Characters Who Make You Feel
We all know how well written characters can make you feel sad, happy, excited , etc…
How exactly does turn order work in SD?
I keep on getting taken off-guard with how turn order works in SD, especially when…
A Day in the Life (Daydreams)
15 posts - 10 participants Read full topic
AR-D 122: INCOMING BRAVE SALTFEST, PART ONE
Help me there it comes more SALT 267 posts - 18 participants …
Read More