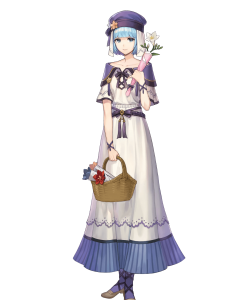 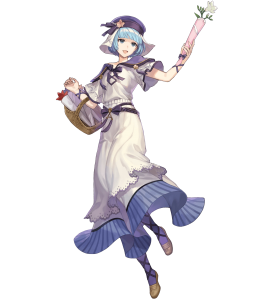 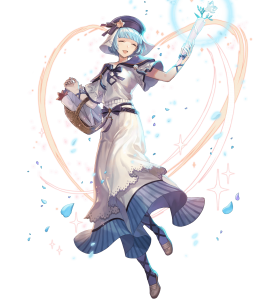 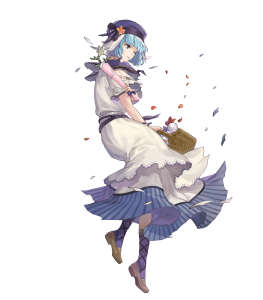 Wonderful Base Kit to Start Off

Valentine Silque comes with a shockingly potent base kit out of the box, possessing Rapport Wand which when combined with her default Spd Opening, allows her to grant the ally on her team that possesses the highest Speed with a boost of 5 Attack/Defense and 6 Speed at the start of a turn. With her B Passive as Live to Serve and her healing Skill as Martyr+, she should have little to no issues in keeping her own HP topped off when she heals allies. All she’s really missing is an A Passive and you could very well make use of her entire base kit as is, allowing her to be a fairly reasonable low investment unit.

Valentine Silque has 40 HP, 32 Defense, and 29 Resistance. Her defensive spread allows her to shrug off hits surprisingly well if she is forced to take damage, and she can easily be compared to her original counterpart but less base stats as compensation for being a cavalry unit compared to an infantry unit.

As long as there are no trenches or forests to get in the way, Valentine Silque’s benefits as a cavalry unit allow her to easily get around the battlefield to protect those in danger as well as cleanse their wounds. She also has access to the ever readily available cavalry buffs to take advantage of.

In exchange for having strong defensive stats across the board, Silque’s Attack and Speed are not so lucky. With a lower end Attack stat of 28, Silque may find herself struggling to output damage without a strong boost to her Attack even if she is running Wrathful Staff. Her Speed is absolutely abysmal with a base value of 22, making her sit among the slowest healers in the game. As a result, Silque doesn’t necessarily do offensive sets all too well, though she can definitely attempt them if one is okay with the fact that she will not do too much damage nor will she be able to secure a follow-up attack.

As with any cavalry unit, anti-cavalry weapons are a major threat to fear. As durable as Valentine Silque can be, all it would take is a fatal strike from a unit such as Brave Micaiah with her Light of Dawn to make Silque wish to turn back the clock with Mila’s Turnwheel.

Fairly Base Build, with an expensive Fort Def/Res 3 which gives V!Silque access to being a (viable) Tanky Cavalry staff unit, However I feel her to be worth it, if you cant afford to give her Fort Def/Res I would suggest Fort Def or Fort Res depending on where you have weakness (Preferably Def) with weapon refinery it’s relatively situational with wrathful refine being good for attacking with bulk, whereas chip damage being more helpful with the other refine, however you should be more focused on her healing due to having Heavenly Light so it shouldn’t affect too much, Silque will be relatively good for defence teams and sustaining herself in chain challenges/multi-map battles.

Hey look a meaningless achievement I never thought I would come close to getting
I always used to look at those people who somehow saved up to max feather count like…
Characters Who Make You Feel
We all know how well written characters can make you feel sad, happy, excited , etc…
How exactly does turn order work in SD?
I keep on getting taken off-guard with how turn order works in SD, especially when…
A Day in the Life (Daydreams)
15 posts - 10 participants Read full topic
AR-D 122: INCOMING BRAVE SALTFEST, PART ONE
Help me there it comes more SALT 267 posts - 18 participants …
Read More