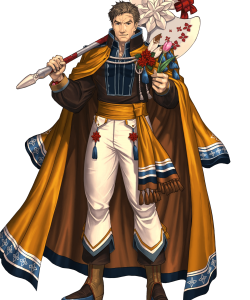 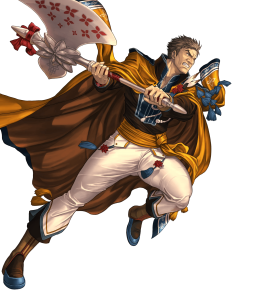 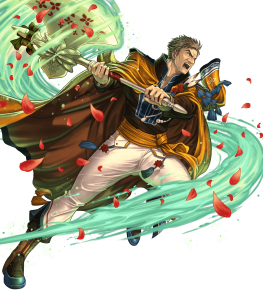 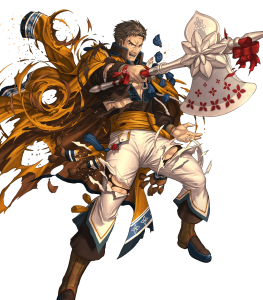 This build is a catch-all hybrid build to ensure that Greil can make follow-up attacks during any phase at any range. A +ATK Asset is therefore crucial, as the 4-point Asset will grant a great deal of extra damage from Greil’s attacks. His weapon is more debatable: a Slaying Axe+ with a +Res forge pushes Greil’s base defenses to an impressive spread of 38/34, while allowing him to charge his Special more quickly. This makes it the best choice if Greil is fighting without a dedicated ally, but if he is alongside an armored ally providing an Armor March buff, the Faithful Axe+ may provide more value. The latter axe is also the preferred option if you plan to use Greil more defensively.

Aether provides Greil with the means to recover his HP, allowing him to fight for longer and maintain the Quick Riposte effect. For greater damage, Bonfire and Ignis provide a huge damage boost on a shorter cooldown, so this may be the more preferable option if Greil is deployed alongside a healer. Bold Fighter and Quick Riposte are both self-explanatory.

Even Attack Wave provides a periodic Attack boost that can greatly improve Greil’s damage output, but this effect can be provided by an ally. Armor March improves his movement alongside an armored ally, but similarly this can be used by Greil’s partner. Besides these two options, Greil’s C slot is flexible, though Ward Armor is a cheap and effective choice.

Greil’s stellar Attack stat and strong defensive spread makes an Enemy Phase build the obvious choice. The Faithful Axe complements this playstyle superbly, allowing Greil to easily acquire an extra +3 to all combat stats, in addition to the +4 Resistance from the refinement. +Res serves to level out Greil’s defensive stats and improve his magical bulk, but +Atk or +Def are also acceptable refinements. +ATK is the natural choice for an Asset.

Distant Counter allows Greil to retaliate against ranged heroes, making it the clear choice for an A slot skill. Special Fighter provides a great offensive and defensive boost, and complements Quick Riposte very nicely. If Special Fighter is unavailable, Vengeful Fighter or Quick Riposte should be run in the B slot instead, freeing the Sacred Seal slot for a strong defensive skill like Atk/Def Bond or Fierce Stance.

As Greil will likely be among armored allies with this build, Ward Armor is a fine choice for a C slot. Otherwise, this skill is flexible and should be chosen to fit the needs of Greil’s team.

Father to Ike and Mist, Valentine’s Greil makes his debut as a powerful axe-wielding armored hero. Though he faces heavy competition in this role, Greil stands out thanks to his incredible base stats: 41 Attack with a 4-point Asset grants Greil an unbelievably high Attack stat, whereas his impressive defensive spread of 38/30 and a HP pool of 47 grant respectable bulk as well. Greil’s Speed is where his BST falls short, sitting at a measly base 18. This is of little concern however, as his armored class gives him access to powerful B slot skills that negate the need for Speed.

Greil is also the first wielder of the Faithful Axe+: an inheritable weapon that grants a +3 to all combat stats when adjacent to an ally. While not as powerful as the unique weapons of other competitors, this axe offers a solid alternative to a Slaying Axe+ that grants a hefty combat boost with an easy to meet requirement. As an armored hero with solid stats across the board, Greil benefits from all but one of these stat boosts.

Greil has a multitude of strengths, but his weaknesses are also apparent and ultimately nothing new among armored heroes: his awful Speed leaves him vulnerable to follow-up attacks from almost any hero in the game, or alternatively it makes him reliant on Wary Fighter. In addition, his limited movement stifles his offensive potential, though this can be remedied through Armor March or the Armored Boots Sacred Seal.

Ultimately, though Greil faces some competition for his role and shares a few common weaknesses, he boasts bewildering strength and solid defensive prowess, making him a more than formidable hero.

“Think you can defeat me? Heh. What a fool. Come try me!”

Gone are the days when heroes would cherish an Attack stat in the high 30s: Greil blows many heroes out of the water with a base Attack of 41 and a +ATK value of 45. Naturally, Greil can deal overwhelming damage after accounting for his weapon, skills and other bonuses.

With a base HP stat of 47, Defense of 38 and Resistance of 30, Greil is more than able to take a solid hit. These defensive stats allow Greil to take on physical and magical attacks with reasonable success, and provide a hefty damage boost to Defense based Special skills.

As an Armored hero, Greil has access to a variety of crucial skills including Wary Fighter and Bold Fighter. These infamous skills circumvent Greil’s poor Speed stat and transform him into a powerful threat capable of multiple attacks, or a defensive powerhouse who can mitigate enemy follow-up attacks.

Greil’s base Speed of 18 is among the lowest of all heroes, especially considering his 4-point Flaw. With such a low Speed stat, Greil must rely on his skills to make and avoid follow-up attacks.

While many of Greil’s competitors such as Legendary Hector, Surtr and Brave Ephraim all possess powerful unique weapons, Greil does not. While he can still make great use of other weapons available, this is one of his greater drawbacks.