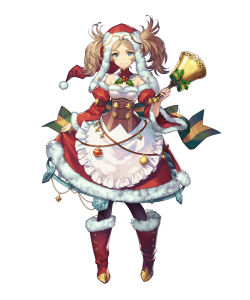 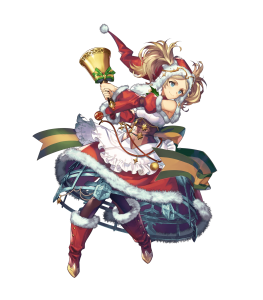 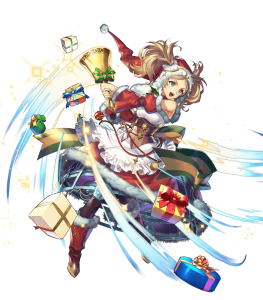 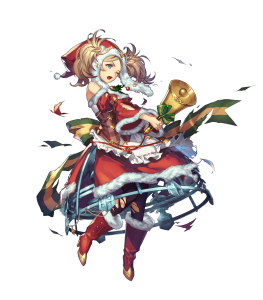 This build takes advantage of the Quick Riposte Seal and Lissa's base Bold Fighter to create a devastating armor-exclusive combo. Regardless of whether it's Player Phase or Enemy Phase, Lissa will always be able to double. Furthermore, she will always activate her Special when initiating combat thanks to the extra Special charge from Bold Fighter, as well as activating her Special on initiated on whenever she gets doubled.

Distant Counter is taken to allow Lissa to counterattack at range, which makes the best use of her excellent bulk. As a result, the choice of weapon refine and Special is based on preference; +Def and Ignis will improve her matchups against physical threats, while +Res and Glacies will improve her matchups against magical threats. Boosting Winter Lissa’s Resistance also allows her to better run Ploys if desired.

Armor March is pretty important to have when utilizing Bold Fighter, as the limited mobility of armors will otherwise be a massive hindrance to closing the gap to initiate. Lissa herself doesn't necessarily need to be running it, however, and can run any C skill as needed.

Despite a lackluster base Speed of 30, Lissa can boost her Speed to an impressive 39 before buffs, via a +SPD IV, +Spd refined weapon, and Speed +3 Seal. This can go even higher if running Handbell and receiving buff support from Lissa's team. By stacking Speed, Lissa can comfortably avoid doubles and retaliate hard with an activated Special. However, stacking Speed can be futile at higher tiers of Arena due to the prevalence of skills that bypass Speed (such as Bold Fighter). This means that it can be better to simply dump Winter Lissa's Speed entirely and focus more on her bulk.

Distant Counter is taken to allow Lissa to counterattack ranged units, particularly ranged blue mages like Reinhardt and Linde. This allows her to make excellent use of her incredible mixed bulk.

Winter Lissa's excellent Resistance allows her to be a great user of Ploys; running Ploys as her C skill and Seal allow her to support both her team and herself. The choice of Ploys is entirely up to preference, but Atk Ploy and Def Ploy are great choices to simultaneously increase Winter Lissa's tankiness as well as her damage output. These can be replaced as needed to suit the team, however. Also, the Quick Riposte Seal may be necessary if running Guard in order to ensure that Winter Lissa can double.

Winter Lissa is an armored unit that clocks in at a massive 175 BST, setting a new record at the time of her release. With 35/34 Defense and Resistance, she has incredible mixed bulk, rivaling that of Sheena. However, her boosted BST gives her a huge leg up over Sheena, as Lissa’s 33/30 Attack and Speed heavily outclass Sheena.

Her base kit doesn’t particularly synergize with itself - Handbell functions only on Enemy Phase, while Bold Fighter functions only on Player Phase. However, simply adding the Quick Riposte Seal is an easy way to make Winter Lissa a powerful mixed phase unit capable of doubling in every combat. Overall, Winter Lissa's excellent bulk and access to armored skills like Bold Fighter ensure that she will always be a serious powerhouse.

With 35/34 Defense/Resistance, Winter Lissa has no real weaknesses, defensively speaking, making her one of the best mixed tanks in the game.

Winter Lissa enjoys all the benefits of being an armored unit: very high BST (175, the highest in the game), Bold Fighter and Vengeful Fighter, and access to armor buffs like Ward Armor.

Winter Lissa's stats are well-rounded, with no clear weak stats. Her stats are all high enough that she doesn't even suffer from being too well-rounded, like other units with similar spreads do as a result of their lower BST.

30 Speed is in a very awkward spot; not quite enough to avoid doubles, but not enough to really be doubling either (though this is a non-issue thanks to Bold Fighter). This can be fixed either by ignoring it entirely (-SPD IV) or with heavy investment.

As an armored unit, Lissa suffers from a very limited movement range of 1. This can be mitigated with movement assists like Pivot or Swap, as well as Armor March.

As an armor unit, Lissa shares a weakness to anti-armor weapons such as Armorslayer. She can potentially afford to run Svalinn Shield to mitigate this, but it will still heavily gimp her build to do so due to preventing her from running a much stronger skill such as Distant Counter.

This Lissa is built to be a severe front lines, player phase bruiser on an armour team. Beach Banner+ synergizes extremely well with bold fighter and death blow- giving her a wide range of buffs just for initiating combat. The defense refine will increase her survivability and make her special just that little bit more potent! (Of course it can be switched out for an Atk refine or the like)
Due to her HP bane, the threshold for brazen skills are easier to access in skirmishes when compared to high HP units- and having an additional 7 Atk/Def on top of the 2 bonus to each stat from Beach Banner and the 6 (8 if you have a death blow 3 lying around!) Atk from death blow make her a dangerous force when initiating combat.
Stick her with a team who has armour March and other armour buffs, and watch her obliterate the enemy before your eyes!

This Lissa build is probably my pride and joy in Heroes. It allows her to EP tank pretty much anything that isn't a red unit (and even then some do barely anything), double them thanks to Handbell and Darting Stance, and then nuke them with a 40+ damage Ignis.

A very speedy Lissa that's a threat on both phases. She keeps her Handbell for +2 all stats on enemy phase. Any axe could possibly work but Handbell is best aesthetic. Get a speed refine to achieve more speed. Swap is swap. Bonfire was chosen for budget but Aether could be used with Slaying Axe and Special Fighter possibly but we're sticking with Handbell. Distant Counter to handle pesky archers and mages that aren't red. Bold Fighter is for guaranteed doubles and to guarantee a special proc. Special Fighter is an expensive choice but also good for mixed phase. C is flexible. Speed Waves or Joint Hone Speed for even more speed is good but I recommend another ally with Hone Armor or Speed Tactic instead. Seal is Darting Stance to become even speedier on enemy phase and double without fighter skills. A total of +8 speed with the Handbell. With the build above she gets 44 speed with a +Spd nature. 42 if given another axe besides Handbell or Sack of Gifts.

With Atk Tactic on another member of my team, Lissa's atk stat can get to 64 out of combat. But by having death blow 3 her attack goes to 70. Once I get B!Celica ill be sure to give Lissa Death Blow 3

Although a -Atk armor unit may not seem very good, WLissa is probably one of my favorite Armor Units that I have (with LA Hector being the best of course).

I decided to keep it budget and run her base set. Giving her Armored Blow 3 allows her to keep focus on that bulk of hers.

Handbell is refined for Res so that not only is she bulky Defensively, but also so her Resistance is amazing. 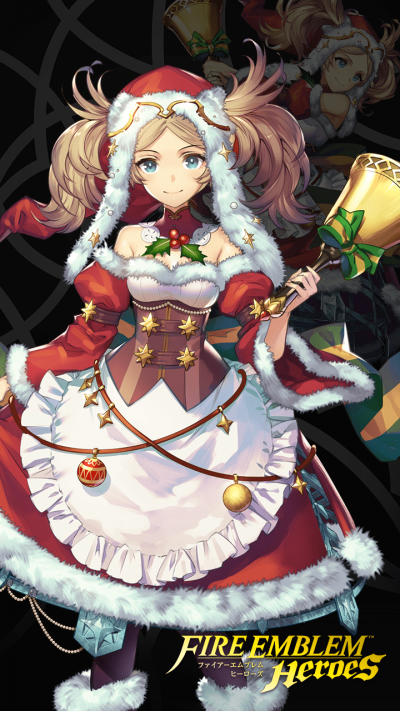