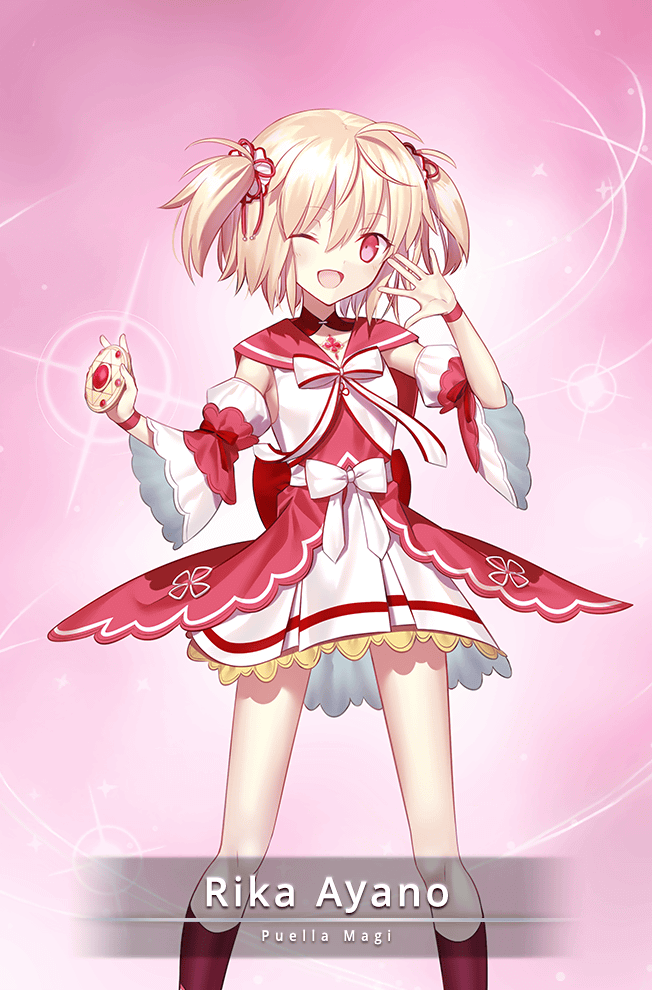 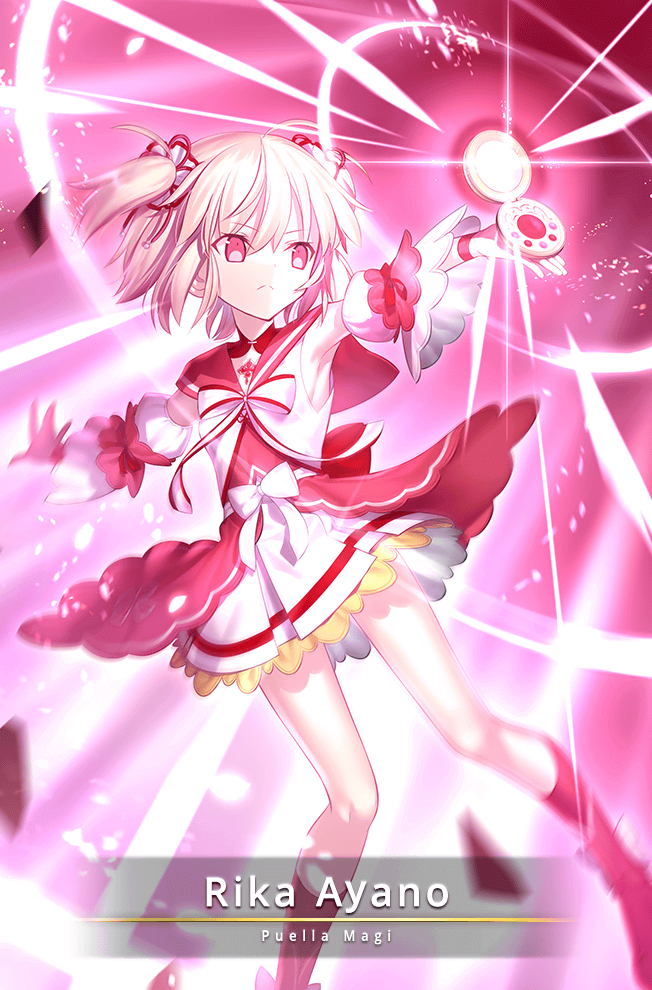 A Magical Girl who is into the latest fashion and make-up. Rika appears to be a typical girly girl, but she is actually very seriously in love. She has been secretly admiring the same person for years. A genuine person, she gets along with everyone. 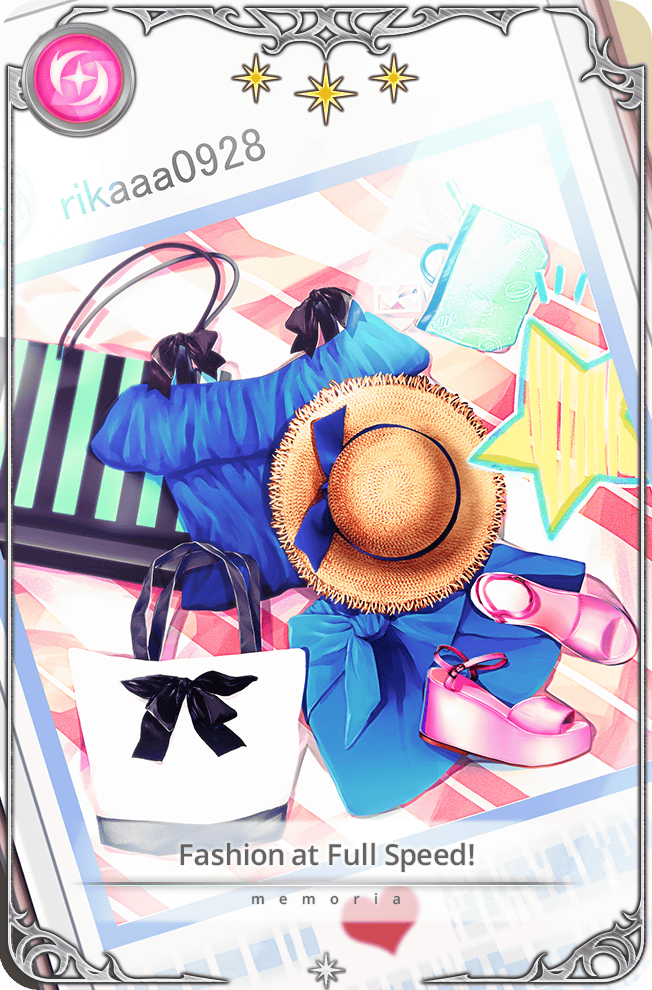 Rika's personal Memoria, Fashion at Full Speed!, draws a full hand of her own discs. Not only does this guarantee a Puella Combo, it also guarantees an Accele Combo thanks to her 3 Accele discs. This makes it likely the most effective “draw”-type Memoria in the game -- allowing her to do significant damage, quickly fill the majority of her Magia gauge, fill a portion of her teammates' Magia gauges as well.

It lets her Connect on the next turn, with the Accele MP effect on her Connect further boosting a teammate's Magia gauge. This makes Rika a natural choice for anybody building a team that relies on Magias.

Rika has relatively high attack for a character capped at 4 stars, and her Magia hits all enemies on the field, allowing her to deal out significant damage to all enemies and take large chunks of HP from multi-space bosses. At 4 stars, her Magia even has a 40% Charm Chance, further disrupting the enemies for a turn.

Rika cannot presently be raised to 5 star rarity, limiting her maximum stats. She also cannot use a Doppel, which is unfortunate, as she's very good at generating MP and could quickly reach 200.

As high-difficulty challenge quests gradually get released in NA Magia Record, Rika's 4 star stats will prove a hindrance, with her going down very quickly and her Magia dealing far less damage. As she is still capped at 4 stars even in the JP Magia Record, she is unlikely to be uncapped in NA in the near future.

Rika's Connect is moderately useful, with a 65% chance of critical hit. The Accele MP effect of her Memoria will usually be useless in Mirrors, however, and other characters like Yachiyo offer critical hit Connects that come with more useful secondary effects. Rika also isn't particularly sturdy, and may have difficulty surviving long enough to use her Connect at all.

Strong water element Magical Girls are very common in Mirrors, especially the likes of Yachiyo and Nanaka after they get uncapped. This limits her damage output and means she'll likely be among the first on your team to fall. -

As other common characters become uncapped and players accumulate more and more 5 star characters on their teams, characters like Rika who are capped at 4 stars will be left in the dust. Her stats simply can't keep up while she's locked to 4 stars.

Having 3 Accele discs is not very useful in Mirrors, as it is still difficult to have a Magia ready before dying, and Magia damage is nerfed in Mirrors. Rika cannot rely on her personal Memoria to help generate MP because of its long charge-up time in Mirrors, and as frail is she is, she's unlikely to survive long enough to fire off a Magia.

Rika does best when paired with memoria that boosts her ability to gain MP and takes advantage of her three accele discs.

Her personal memoria, "Fashion at Full Speed!" will replace the disc pool with Rika's discs, ensuring an accele combo and bonus MP. 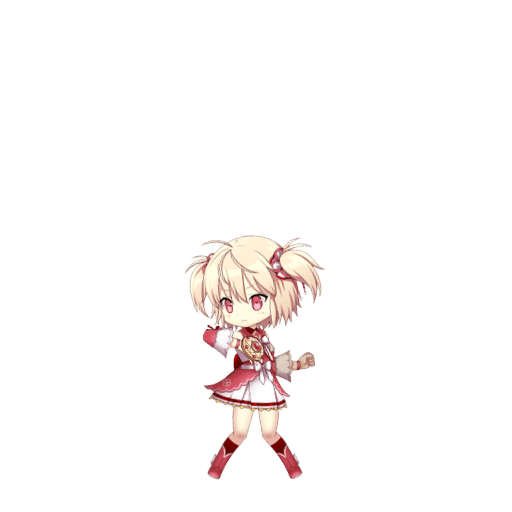 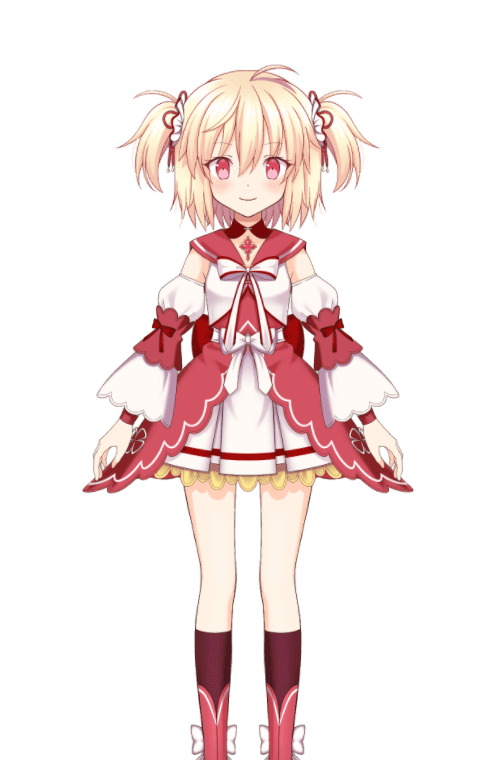 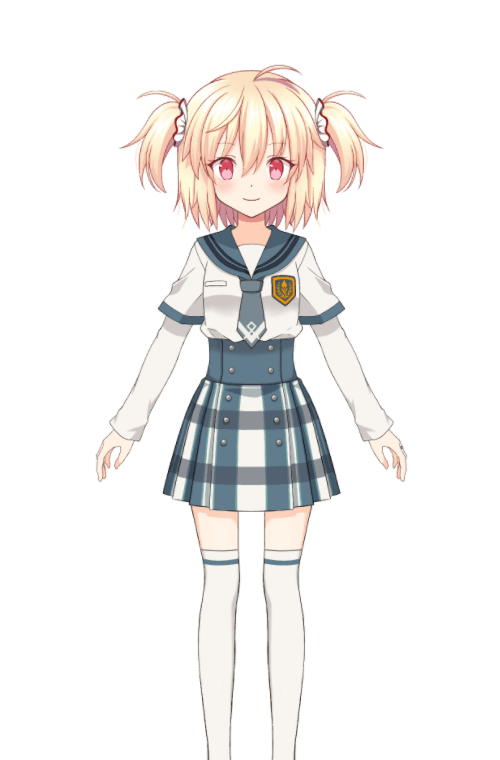 A fashionable magical girl. Despite her looks, she is a genuine person who cares deeply about others.

Rika Ayano once had a crush on her female best friend, only for her friend to have a crush on another boy in their class. Rika runs into Hinano Miyako and Emiri Kisaki, who explain they’re magical girls.

As she is walking home, she is approached by Kyubey. Thinking back on her crush and the advice given to her by Hinano and Emiri, she decides to contract and wishes that her crush fall in love with her instead. The next day, sure enough her best friend has broken things off with the guy and is now head over heels for Rika.

Rika, however, knows that this is not true love and only a result of her wish manipulating her friend’s feelings. She then begins to fight witches recklessly, not caring if she’s hurt in the process. Hinano finds her and asks her what’s wrong. Rika explains that her crush’s ex-boyfriend helped her out the other day which caused Rika to realize her two friends were perfect for each other and she ruined that. So Rika broke up with her crush and urged the two friends to get back together as penance for what she did. Hinano cries alongside her at this sad tale before Rika cheers them both up.

Read more of Rika's story on the Puella Magi Wiki.