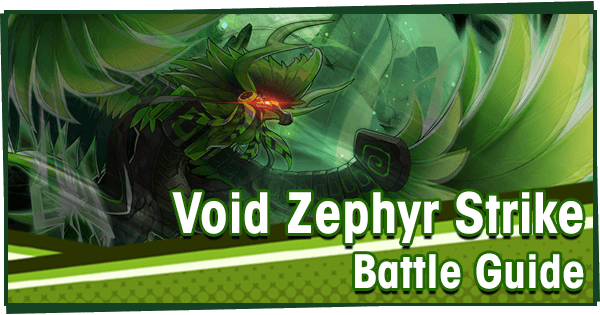 Void Zephyr is one of the harder Void Battle players can challenge, with a required Might of 12000. He can be fought in the Void Zephyr Strike quest, and can inflict various negative effects (including Sleep) on Adventurers.

The standard team composition for Void Zephyr is one Healer paired with three Damage-dealers. Forgoing the Healer will leave the team no way to heal from Zephyr’s unavoidable attacks, and bringing two will leave the team with a strong chance of timing out. Adventurers should be at least 3500 Might before tackling this quest, and equipped with the appropriate weapons (see Weapon Selection below).

Flame-attuned Adventurers are essential for their elemental advantage over Zephyr and for resisting Dull/Dragon Delay. Many of Void Zephyr’s attacks inflict Sleep, so Adventurers who can resist Sleep are valued more highly than those who do not. However, as Void Zephyr only inflicts Sleep at a rate of 50%, any Adventurer with more than 50% Sleep Res can completely resist it.

Other decent Damage-dealers include Euden, Marty, Valentine’s Orion, Sinoa, Renelle, and Gala Sarisse. These Adventurers are recommended for experienced runners only, and require more investment or alternative strategies to achieve the same performance as the recommended runners.

Sleep aside, Void Zephyr inflicts Adventurers with two special debuffs during the fight. Dull cuts an Adventurer’s Strength by 90%, and Dragon Delay eats away at the Dragon Gauge, preventing the Adventurer from ever using Shapeshift.

Because Void Zephyr has undodgeable attacks, these effects can only be avoided with the proper resistance. But since there is no weapon with both Dragon Delay Res and Dull Res, players must “pick their poison”, and can only choose one effect to resist against.

It is therefore mandatory for Damage-dealers to have Dull Res on their weapons, lest they have their damage reduced by 90%. There are no Staves with Dragon Delay Res, so Healers are forced to use either Dull Res or another Staff. As Healers do little damage anyway, the damage loss from Dull is not important on a Healer.

These weapons are currently the only Flame ones available which have Dull Res, which limits the damage-dealing role to Adventurers to one of these weapon types. Each damage dealer should have one of the above weapons.

Ranged attackers such as Gala Sarisse and Sinoa can use other weapons as they can easily avoid most (but not all) hits. This is a riskier strategy than running one of the above weapon types, and is only recommended for experienced runners.

Healers can forgo the Dull Res weapons if they choose in favor of any of the other above weapons. Doing so will slightly increase their healing potential, but lower their damage output.

This attack pattern ends when Void Zephyr is knocked into the Overdrive State.

This is Void Zephyr’s attack pattern in Overdrive, ending when he reaches the Break state.

Before reaching Overdrive, Void Zephyr has a very simple attack pattern with many easy to dodge abilities. Damage-dealers should try to avoid taking damage during this segment, as all hits are easy to avoid (save for Beak/Slash).

Ideally, healers should not need to heal before the boss reaches Overdrive, but if necessary, they should do so as soon as possible in order to charge their next main heal for the Overdrive phase. Players using Valentine Hildegarde should save their secondary Skill for Savage Squall, and use it right before Void Zephyr goes into Overdrive.

Void Zephyr will use Savage Squall as soon as he reaches Overdrive. This unavoidable attack will deal considerable damage to the whole party. Healers should use their heal directly after Savage Squall hits the party to keep them topped up. They will now need to charge up and save their main healing skill for after Howling Vortex hits.

Savage Squall cannot be dodged with a roll or by using Skills (The damage can be shielded, however). Charging and holding a Force Strike will prevent the Knockback from this move. Adventurers with Skills which cause them to jump (such as Ezelith and Euden) can avoid this move, although the timing is very strict.

The time between Savage Squall and Howling Vortex is the most dangerous time for the party, as taking stray hits can put Adventurers below the minimum required to survive Howling Vortex. Healers using Verica or the Ark Voyager Staff can use their secondary heal to save an otherwise doomed player in this phase.

If the team’s general HP is too low to survive Howling Vortex, Healers should instead use their primary heal before the attack lands. This will leave the party vulnerable during the next phase of the fight, but will at least give the run a chance to continue.

It is possible to bring Void Zephyr to Break before he can use Howling Vortex. If he is broken before the attack lands, the attack will be safely cancelled. This is the best course of action for the party, but is difficult to achieve.

When Howling Vortex begins, all players will need to huddle under the action marker. Healers should have their primary healing Skill ready for immediate use after Howling Vortex hits. If you are targeted, do not attempt to run away from the rest of the party. This will cause you to take the full Howling Vortex attack and die, which is likely to fail the run.

Immediately after this attack lands, the Healer should use their primary healing Skill. Beware as Void Zephyr will use Targeted Tornadoes after this attack, which can eliminate Adventurers who locked themselves into short skill animations.

After Howling Vortex, Void Zephyr will run through a less dangerous rotation twice before using Savage Squall again (check Attack Rotation section for details). During this part of the fight, Healers will be able to charge and use healing freely. After his Break phase, Void Zephyr will use his standard attack rotation.

Both Verica and Valentine’s Hildegard should try to save their secondary Skills, as they have large SP costs and will be useful once Void Zephyr reaches Overdrive again.

Void Zephyr will approach a target, peck in front of him, then fire off a quick wind slash. Players hit by the peck will need to quickly dodge the incoming slash. The peck is very difficult to avoid, and the slash has a wide hitbox capable of hitting on either side of Void Zephyr. It can be avoided with use of a Skill.

Void Zephyr spawns red markers at the location of each player-controlled Adventurer. After a short time, they explode into tornadoes. It can be easily avoided with a Skill or roll dodge. Melee adventurers can also temporarily move away from the boss to keep that space safe.

Although this move is predictable, the tornadoes have a long active hitbox. Adventurers with fast Skills such as Aoi may find it hard to time their Skill activations to dodge this move. This attack can inflict sleep.

Identical to Targeted Tornadoes, but instead spawned randomly around the field. This attack can inflict sleep.

Void Zephyr spawns a single red marker on himself, which explodes into a tornado around himself after a short time. Although very similar to the two moves above, this attack has a shorter active time, making it very easy to avoid with a Skill. This attack can inflict sleep.

An attack that hits the whole field and has a large knockback, pushing Adventurers to the sides of the arena. The damage can be shielded, although it will still forcefully apply Dull and Dragon Delay to those who don’t resist those effects. Adventurers with Skills which cause them to jump (such as Ezelith and Euden) can avoid this move, although the timing is very strict.

Void Zephyr will slowly create line after line of purple action markers, extending out from himself clockwise in a circle. After a short time, he will begin sequentially releasing tornadoes from his body to fly down each marked area.

This attack can be easily avoided by standing just anti-clockwise of the first marker that Void Zephyr creates. Once he begins to release the first tornadoes, players should walk into the space where those tornadoes just went. It can also be avoided by walking to the edge of the arena, and standing inside one of the small safe-spots between the action markers. This attack can inflict sleep.

Void Zephyr chooses one Adventurer and targets them with a Special action marker. The marker will stay affixed to them and move where they move. After a short time, the marker will explode dealing damage to everyone inside. However, the damage is shared between all recipients, meaning all players must share the damage to prevent any deaths.

This attack cannot be dodged with the use of a Skill. Depending on the HP of each Adventurer, it may be possible to survive with just three inside the radius. This attack is functionally identical to High Midgardsormr’s Tattered Sky move. If Void Zephyr is pushed to the Break state during this attack, it will be safely cancelled.