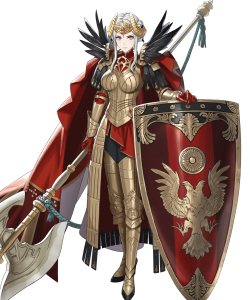 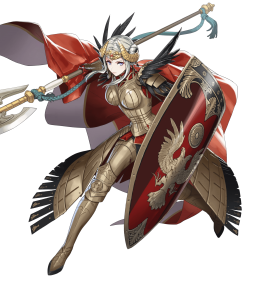 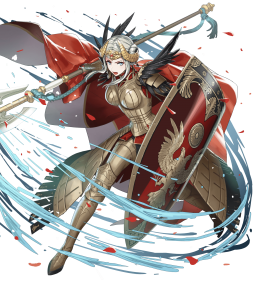 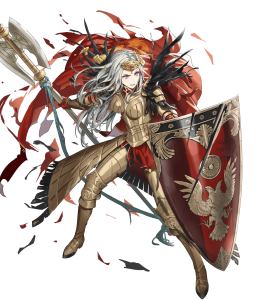 The Light that Shines over Fódlan (Versatile)

Brave Edelgard’s stats put most Heroes to shame, as she sports 185 BST when unmerged. These stats have been distributed heavily into her defensive stats as well as her Attack, which sits at an astonishingly high value of 45. Edelgard should have little issues with dealing decisive blows with her axe while taking an impressive amount of punishment even before Skills are factored into the equation.

Brave Edelgard brings two unique traits to the table. First up is Flower Hauteclere, an axe that reduces her cooldown count by 1 like a Slaying weapon, and at the start of a turn if she is at 25% HP or more, she will gain one extra movement space and be able to warp to any ally within two spaces from her. This is immensely powerful as it allows Brave Edelgard to get around the normal issues that armor units have with mobility without being forced to daisy chain with Armor March or isolate herself with Armored Stride. On top of this movement buff, if she is at 25% HP or more during combat, she will inflict -6 Attack/Defense to her opponent.

The second unique trait that Brave Edelgard sports is a unique B Passive called Black Eagle Rule. Black Eagle Rule seems designed to address Edelgard’s weak Speed stat by giving her a follow-up attack if she has 25% HP or more at the start of combat. On top of this, if her foe is to be the one to initiate combat against her, their second strike will have their damage reduced by 80%. A normal issue with slower units that rely on follow-up Skills such as Edelgard is that their Enemy Phase tends to suffer from the fact that they get attacked twice before they can get their own second attack off. Brave Edelgard does not have this issue as hard as others because she can reduce the damage of the second strike of her enemy, allowing her to easily shrug off even otherwise fatal Special procs.

In an attempt to boost the rest of Brave Edelgard’s statline, her Speed has taken a massive cut and sits at a value of 16. As Speed will often prove to be her ideal dump stat, this can get even lower with a Super Flaw and sit at a value of 12. Edelgard possesses the means to secure follow-up attacks with the aid of Black Eagle Rule, but it does mean that she will almost constantly receive follow-up attacks from her opponents (which the second strike will thankfully be reduced due to Black Eagle Rule). What cannot be fixed though is the fact that Edelgard runs into trouble with effects that block her secured follow-up and force a speed check such as Null Follow-Up, as Edelgard’s horrible Speed will have no chance of landing her a follow-up in those situations.

Performance Tied to Being 25% HP or Above

It should not be too difficult in order to stay above 25% HP, though in the event that she does fall too low, Brave Edelgard loses access to three parts of her kit. She will no longer gain her extra movement buffs, no longer apply her in combat attack and defense debuffs on her opponent, and no longer secure a follow-up attack for herself. In order to ensure Edelgard stands strong, keeping her healthy is crucial for longer fights or where she is expected to face heavy firepower.

This Build Aims to make Edelgard a Defensive Melee specialist who’s main objective is to deal with Brave weapons and Desperation user’s.
Weapon Flower Hauteclere.
Special: Aether for healing.
A:Slot Steady Breath
Steady breath Provides a lot of good benefits that will be listed here.
1. It provide special cooldown +1 on both your attack and the enemy’s attack in the enemy phase.
2. It also grants +4 Def which will help Edelgard better deal with powerful enemies.
B Slot: Black Eagle Rule.
Black Eagle Rule is her pef.Skill let see how it works. If Edelgard Hp is Equal to or greater than 25% she can make a guaranteed follow-up attack, and also if foe initiates combat, Damage form the 2 attack is reduced by 80% note in this instance second Does not me consecutive attacks which is why deflect melee is used in the seal slot, but more on that later. So Black Eagle Rule does 1. Grants a guaranteed follow up and 2.Reduces the damage form the second attack by 80%.
C Slot: Pulse or Panic smoke or whatever you want.
Seal Slot Deflect Melee.
for Damage Reduction on Consecutive hits.
Enemies set can tank Est and +Atk Altena at +0

B!Edelgard is in a position where she can benefit from both offensive and defensive specials, so why not run both as a mixed tank with Aether? With Heavy Blade as a seal, she can reliably trigger Aether when initiated on, letting her heal back lost damage and remain above 25% hp. After the first round of combat, B!Edelgard can also be in a position to trigger Aether when initiating a second round, letting its effect of -50% def benefit her when attacking a particularly bulky opponent.

Her boon can be picked between Atk, letting Heavy Blade trigger more reliably, or her Def superboon for better durability and taking less damage when charging Aether.

B!Edelgard's most unique strength is her B skill Black Eagle Rule, letting her guarantee followups and reducing damage from enemy followups by 80%. However, the latter part of the ability only works on enemy phase. If B!Edelgard attacks and can't 2HKO her opponent, then she receives full damage from their followup. This weakness is most apparent when fighting red units. By replacing Noontime with Ignis and a Heavy Blade 3 seal, B!Edelgard can reliably activate it when attacking and keep herself safe. You can also run Bonfire if you either don't have a Heavy Blade Seal, or want to run a different seal instead.

This Build make edelgard equipped to double her special against close combat enemies, as all will likely double her, which is the requirement for this build.

With accelerate special trigger, bonfire’s special count gets reduced to 2, which can be activated in one blow from an enemy attack with fierce breath. If edelgard allows all her foes to initiate, her counterattacks will always be carried out with bonfire, while still allowing her to take advantage of the 80% damage reduction of her foe’s follow up attacks.

Fierce breath and fierce stance combine for +10 attack, while defense smoke weakens nearby enemy’s defenses by -7 to greatly aid the build in damage output.