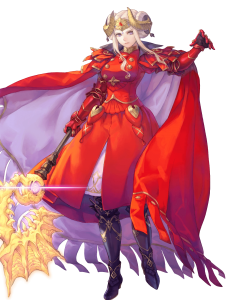 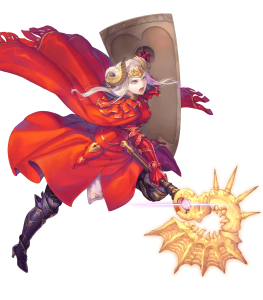 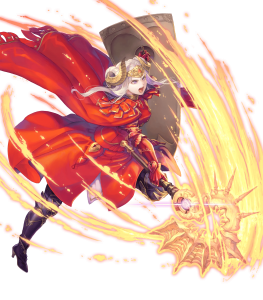 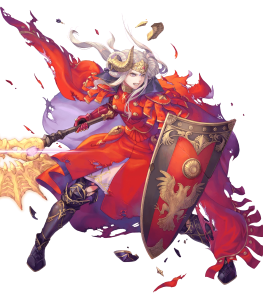 I Wanted to Walk with You... (Raging Storm Galeforce)

With an alarmingly high Attack stat of 42, Legendary Edelgard rules with some of the highest Attack in the game. Pushing it even higher with a Super Asset is possible, making her reach an astonishing 46 Attack before any Skills or Weapons are taken into account. Her Defensive stats do not fall far behind either, with 39 Defense and 36 Resistance alongside 45 HP, she proves to be able to hit hard while also shrugging off blows.

Aymr grants Legendary Edelgard +3 Attack just by equipping it, adding further to her impressive Attack stat. If Edelgard is not adjacent to any allies during combat, she will inflict -6 Attack/Defense on her opponent during combat and prevent them from landing a follow-up attack on her. The Defense debuff helps Edelgard hit even harder than normal, and the Attack debuff makes her even bulkier than before. The follow-up denial allows Edelgard to be in a much safer situation than other slow bulky units that do not have a means to deny follow-up attacks.

If Legendary Edelgard initiates combat while equipping her unique B Passive, she will be granted another action after combat if she was not adjacent to any ally. This effect is extremely potent, allowing Edelgard to act again, whether it is to finish off an opponent, move on to take out another, or retreat out of harm’s way. It even interacts perfectly fine with Galeforce, giving Legendary Edelgard the potential to move three times in one Player Phase before any Dancers are taken into account. As an added bonus, if Edelgard’s opponent is a dragon or beast, she will secure a follow-up attack against them.

In exchange for the massive values on all her other stats, Legendary Edelgard’s Speed is a horrible value of 17, and can be even worse with a Super Flaw that brings it to 13. While this is largely inconsequential when running Aymr, this does prove dangerous when taking another weakness into account; the fact that she can be drastically hard-countered by effects such as Null Follow-Up that remove her added protection from Aymr, and will deny any follow-up attacks granted by Skills such as Raging Storm, Bold Fighter, or Quick Riposte. With weapons such as Byleth’s Creator Sword carrying a Null Follow-Up effect, it seems Edelgard still sports a weak spot for her mentor.

Must play around Solo Conditions

Aymr, Raging Storm, and Armored Stride which is the C Passive that Edelgard will often prefer for most builds all play around Edelgard not being adjacent to allies. As a result, this can make Edelgard somewhat difficult to support compared to other units. While it is easy to take advantage of support Skills with range such as Drives or Tactics, Edelgard must be cautious not to be adjacent to any ally in order to take advantage of her strengths.