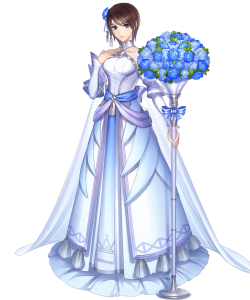 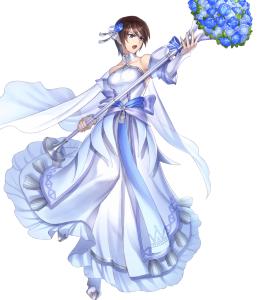 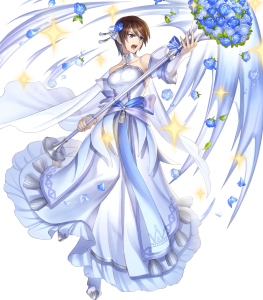 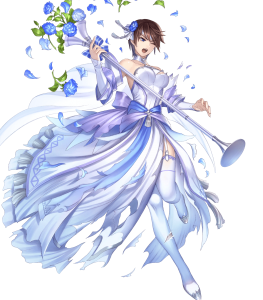 Married to the Battlefield (Firesweep)

Bridal Tanith will want either a Attack or Speed Asset in order to aid her offensive potential. Given that Firesweep Lance will block most counterattacks regardless, what Flaw is chosen is of much less concern. Still, having a Resistance Flaw is still overall recommended.

Either Attack or Speed will be the best option for an Asset in order to boost Bridal Tanith’s offensive potential. Resistance is her least important defensive stat and will be the optimal stat to

Again, Attack and Speed both make for great Asset choices. A Defense Asset is also a good choice in order to increase her defensive capabilities. Once again, a Resistance Flaw remains her best option.

Tanith’s heart may belong solely to the battlefield, but here she is regardless with a bridal gown on ready for the festival. Bridal Tanith joins the ever-growing group of lance fliers available and while she does possess good stats, she fails to set herself apart in the bloated crowd.

Statistically speaking, Bridal Tanith is actually quite good. She sports the same offensive spread as Tana which makes her good for offensive play. She also comes with one of the highest Defense stats amongst lance fliers, meaning she can also be run defensively. Her main weakness is her poor Resistance stat.

Unfortunately, these good stats are not enough to make her stand out in any significant way from the other lance fliers. For example, Catria, Shanna, and Est are three lance fliers who are arguably outclassed by Bridal Tanith statistically, but these three all have their own unique weapons that set them apart in the crowd. Bridal Tanith’s superior stats are not enough to make her worth using over the three lance fliers mention here, not to mention all three are not seasonal locked and can be obtained at 3 and 4 stars rarity.

Overall, there is not much reason to consider obtaining and using Bridal Tanith outside of love for Tanith herself. Bridal Tanith is certainly not bad though. Her strong stats means that she can still be a more than capable unit with the right skills and support.

Bridal Tanith comes with good physical bulk for a lance flier. Her HP of 37 is nothing special, but she comes with 33 Defense, one of the highest amongst lance fliers. With a refined weapon buffing her HP by five and defensive-oriented skills, Bridal Tanith can become surprisingly strong defensively when facing physical opponents.

Being a flier, Bridal Tanith gets to enjoy enhanced mobility which lets her move over normally inaccessible terrain such as mountains and water. She can also benefit from flier buffs such as Hone Fliers when paired with other fliers.

Bridal Tanith’s biggest statistical weak point is her Resistance stat of 21. This means she fares poorly against magical units such as mages and dragons. One should take caution if Bridal Tanith needs to engage in combat with magical opponents.

As a lance flier, Bridal Tanith sits in a class packed with very similar units. Unfortunately, her good stats do not make her stand out enough. Units such as Catria, Est, and Shanna are much more readily available and come with personal weapons which do make them stand out. Even units such as Cordelia and Shigure stand out as arguably better investments thanks to being in the 3 and 4 star pool and thus easier to merge and find ideal IVs for.

It’s not that Bridal Tanith is bad because she is certainly a good unit. It’s just that there are so many other lance fliers which would be better investments from a performance and availability standpoint.

How do you pick your Summoner Supports?
Out of idle curiosity at work, I just up and windered how everybody picks the units…
Where can i find newest HM Farming Guide for Rival Domains?
Is there a special Discord for this? 3 posts - 3 participants …
Knoll... Just Knoll
Heyyyyy I just noticed that out of all gen 5 units that I added as merge projects…
Coco IV and Birthday Luck
Ever since 2018 when I got a +Atk Ophelia, Flora and Silas in 50 orbs, I’ve clung to…
Advices on Balthus & Yuri builds + usages
Hello everyone ! I’m looking for advices on builds for Balthus and Yuri, and on some…
Read More