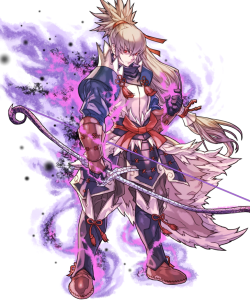 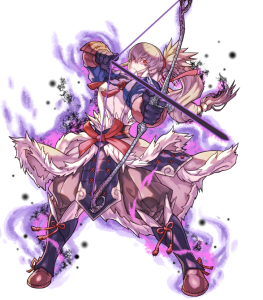 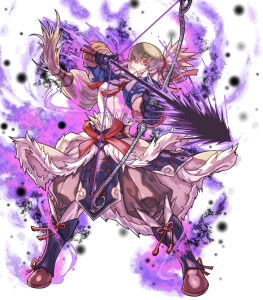 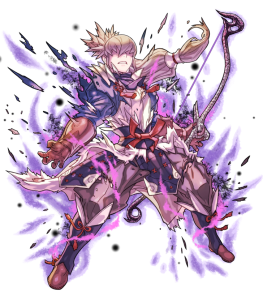 This is a standard Fallen Takumi build, designed for just raw firepower. Skadi gives Takumi an extremely nice speed stat, making him a prime choice for some Desperation sweeping. Brash Assault is recommended for the Seal, because it allows Fallen Takumi to guaranteed double against any many opponents when at low health.

If you so choose, you could probably run Ardent Sacrifice in the support slot with Life and Death 3 in the A-Slot. That way, Takumi could heal teammates to get to the required activation point for Brash Assault. However, this sacrifices a significant amount of bulk, which can be more useful than you'd think. Your choice.

DISCLAIMER: This is not an optimal build, and I recognize it's very situational and not good for Arena runs.

This is the personal build I have on my Takumi, which I use primarily with a dancer to increase his damage output. This scummy build is made to chip down armor units like it's no problem, taking chunks of health after every instance of combat. Skadi is used alongside this, to counteract builds which rely heavily on Ward Armor, or any other defense buffing skills. Of course, this is a very situational build, but it's what I like most about it. Spd Smoke will help Takumi get doubles on these units, and get him to use his special more frequently.

Another thing that would help would be to use Summoner Support + Ally Support to help bring his stats up more. His defense stat being pretty good already, adding more with Def Tactic along with these will make him have decent defense (for a bow unit) when attacked, helping to give him some longevity.

Deal immense amounts of AOE damage with this Takumi build. Every strike can take down 14 HP of enemies close to the target--making them easier picks for Takumi himself or his allies. Skadi's effect can further soften enemies. This build is fun, but should not be expected to perform very well under a number of situations.

The main drawbacks with this build are that:
-You will be sacrificing Spd Smoke.
-Takumi isn't as reliable as other archers.
-Enemies with vantage can be triggered after your AOE rampage. Enemies that are built to have high defense, vantage, and distant defense (Hector) will destroy Takumi easily.
-This build is extremely niche. You'd want to secure immediate kills with an archer instead of softening enemies.

This unit is amazing and I found out the right way to use him and here is the reason why I kept his other two skills the same than the middle. Fury 3 does 6 damage to him at the end of his attack yes I know but it's good because with that, if he is taking that 6 damage every time he uses his special he's at least going to have a +5 damage boost due to Vengeance. Now I have him as a distant counter unit, and he's amazing with that, but you have to be smart about it. I have him teamed up with azura New year's azura though, she has fifty health making it so he can borrow health from here, but renewal 3 will allow you to get your health back a bit faster though. And then speed smoke will just allow you to counter with a follow up attack because it will -7 spd and with his high speed he's at least guaranteed to counter.

WEAPON: Skadi, while situational, can be a very useful tool if you're a player who knows how to make use of it. Skadi gives Takumi a free boon that he normally couldn't acquire as a GHB unit, without having the drawback of a bane.

ASSIST: Swap is what I personally use for infantry units. Using Reposition also makes sense though. Whichever you choose is simply up to personal preference.

SPECIAL: Moonbow is optimal here as we're using Skadi. If you want to run Brave Bow however, Luna is a good idea, as Takumi can now get Luna off reliably with it. This build gives Takumi a ton of Speed and drops his enemy's. So Brave Bow is also just as viable.

A SKILL: Life and Death is the optimal A skill for Fallen Takumi. Other builds will tell you that Swift Sparrow is better, as to not decrease his already negligible defensive stats. Do NOT be fooled by this. LnD is superior to SS here because, while it DOES decrease Takumi's defensive stats, it allows him to survive MORE battles than SS because he can simply out-damage his attacker. By giving Takumi the extra 5 speed he gets doubled even LESS than he already does, and is granted the opportunity to kill his attacker before then can double him (Assuming his attacker isn't running a skill that allows instant follow-up attacks). Keep in mind this is on the ENEMY phase too! As for Fury builds, Fury simply isn't a good idea as 37 HP really isn't enough to excuse Fury's 6 self-damage.

B SKILL: Chill Speed (while expensive) allows Takumi to know where he needs to be and who he needs to hit first. This skill literally POINTS OUT you biggest threat for you and gives you a handicap to kill them. With this you can also know where to position Takumi for best use out of his Skadi's effect. Desperation is acceptable as a budget skill here if you don't have a spare Fallen Celica.

C SKILL: Speed Smoke is a fantastic ability to be given to Takumi for free, and suits what he's meant to do here perfectly. This Takumi build is all about guaranteeing that Takumi is going to double his opponent. Speed Smoke, while not only dropping his opponents speed after combat, drops any enemy near them. This means if Takumi has a dancer near him, its a 2 for 1 special.

SEAL: Hitting 42 Speed should be MORE than enough for Takumi to reliably double most enemies in the game, not even accounting for the speed debuff they'll be taking. Therefore, an Attack 3 seal should suit him nicely.

TL;DR: This build is meant to turn Takumi into a nuke for the enemy's Speed stat. He's a unit who's able to get things solo and help out his teammates at the same time. I like this in a unit a lot. Keep in mind this build centers around the premise that you're a player who is smart about where he/she puts his/her units. Positioning is very key when it comes to using Fallen Takumi properly as to bring out the best in him as a unit.