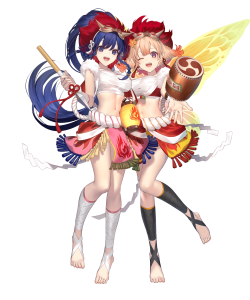 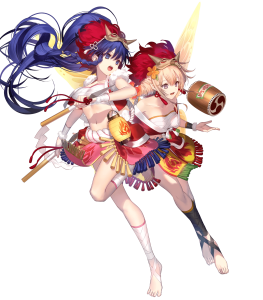 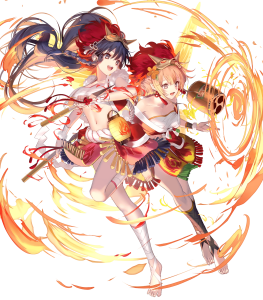 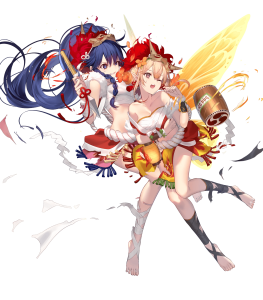 Tana’s unique weapon, Kindling Taiko, provides a variety of useful effects. In addition to accelerating her Special trigger, it also grants Canto 1 to herself and allies within 2 spaces at the start of her turn, allowing them to move 1 space after combat. In combat, so long as her HP is at least 25%, it provides a stat boost, neutralizes any effects like Wary Fighter that prevent her follow-up attacks, and boost her Atk and reduce her foe’s Atk by 20% in combat with any foe that isn’t red, improving her damage and decreasing her damage taken. These effects combine to give her strong combat and great team support with Canto.

Tana’s Harmonic Skill with Peony functions similarly to Dance, granting another action to the ally with the highest HP within two spaces that is originally from either Fire Emblem Sacred Stones or Fire Emblem Heroes, including units using variants of Dance. It also grants Resonance: Blades to Tana and any allied units from those games, boosting their Atk and Spd by 4 in combat.

Tana’s status as a green dagger flier allows her to use great skills like Sturdy Impact, Lethality, and Spd/Def Hold.

Tana’s base 39 Atk and 42 Spd allow her to deal high damage and gain a follow-up attack against most foes.

Tana’s base 39 HP, 26 Def, and 32 Res are decent. In combination with the 20% reduction to her foe’s Atk so long as that foe is blue, green, or colorless, she can survive counterattacks surprisingly well against any non-red foe.

We all know that ranged fliers are in a rough position when it comes to inheritable skills, particularly in the B slot. Tana’s Kindling Taiko does allow her to make use of good options like Windsweep and Watersweep, but other than those and Trace skills the options are generally mediocre.

The 20% Atk boost and Atk reduction of Kindling Taiko does not work against any red foe, meaning that Tana does little damage and is KO’d easily. However, this is not necessarily a large drawback since those matchups were generally bad to begin with.

Tana has a variety of strong effects, but competes with other powerful green units like Pirate Hinoka and New Year Dagr for a similar offensive role. Her ability to confer Canto to allies is unique at the time of writing, but may compete for a team slot with other useful support effects.