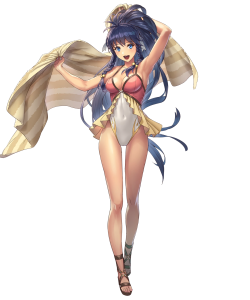 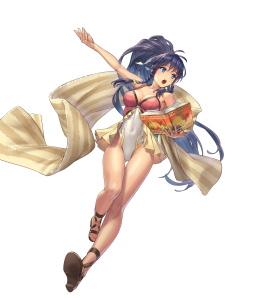 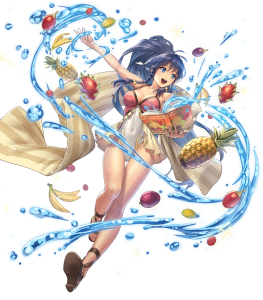 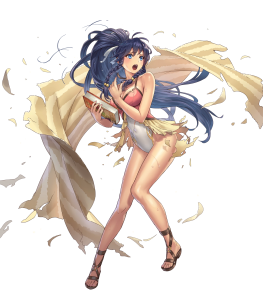 Originally an often overlooked weapon, Summer Tana finally manages to bask in the summer limelight through her Fruit of Iðunn’s refined base effect: rather than maintaining its base universal Guidance, any nearby ally can immediately warp within two spaces of Tana rather than strictly adjacent to her. This translates to a substantial expansion of her team's overall range and flexibility when wielded properly for offensive strategies, synergizing nicely with the additional Atk/Spd enhancements Tana can contribute for directly bolstered firepower as well.

Although Fruit of Iðunn by itself isn’t enough to skyrocket the Frelian princess to premium status, the weapon’s applications are quite diverse and altogether distinguish Tana among a sea of otherwise very similar offensive nukes; it's hard to replicate what she can do. Refined Fruit of Iðunn also does improve her offenses considerably through a potential +9/+9 Attack/Speed boost of her own. Tana is generally better off focusing on maximizing her support focus since it’s more valuable/standout and just raising her offenses isn’t really enough to help her offensive capacity keep pace with more modern additions — but hey, at the very least, this makes offensive play an option and rounds out her utility.

The worth of Summer Tana’s Attack/Speed combination of 33/36 has fallen quite a bit since the time of her original introduction, but it is pretty solid nonetheless. Coupled with the built-in stat swings from refined Fruit of Iðunn, the princess can deal damage and perform follow-ups with respectable consistency when needed.

Being a ranged flier — while a bit of a death knell from an offensive viewpoint — comes quite in handy for Summer Tana where her support capabilities are concerned, as her ability to bypass most terrain means she can easily help beacon allies across maps they otherwise would have had difficulty navigating via refined Fruit of Iðunn. Access to Far Trace alongside her inherent range also means that she can actively engage in the course of battle without outright sacrificing her supportive value; for instance, Tana could initiate against a given foe and then utilize Canto to move back into a position that would best benefit her team.

Summer Tana’s overall bulk has always been rather shaky — 55 physical bulk and 60 magical bulk can hardly be called anything else — and this is accentuated further by not only the sheer amount of Attack that many modern units feature, but also the fact that her Fruit of Iðunn does nothing to add to her defenses even post refinement. This leaves Tana in a difficult position of facing considerable risk of being outright OHKO’d by foes able to counterattack and disallows defensive play entirely.

This build is certainly not fullproof; it (somewhat) increases tana’s survivability, but obviously she’ll need more support. Her base weapon is essentially conditional guidance that works with any movement type, so she’ll need to stay healthy. A +spd IV will get her up to 43 speed and that will increase to 48 with joint hone spd. Sturdy impact and mirror strike as a seal will increase her defense and resistance to 30 on initiations which is respectable for a mage flier, and will increase her damage output greatly. She will need a lot more buffing support because she will still go down pretty easily

Mixed emblem Tana.
The fruit tome lets her position allies before attacking if the situation requires but the boost to speed and bst helps.
Bladetome works on full tactics teams/ for the rich / if you dislike tharja.
Fury to boost bst / could be swapped out with swift sparrow for the money gifted
desperation for ez doubles.
Speed seal + base speed works well and atk boon to help with damage output.
I use with L Ephraim, hot couple but use this with any standard blue/green unit and you're good to go. She boosts attack with odd wave but that can be swapped for any other tactic.