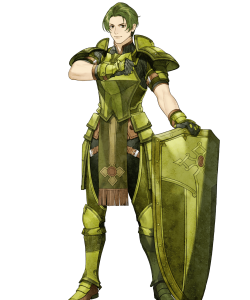 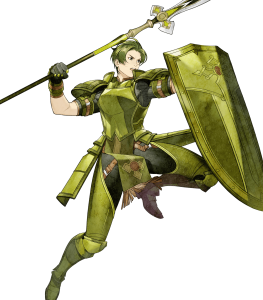 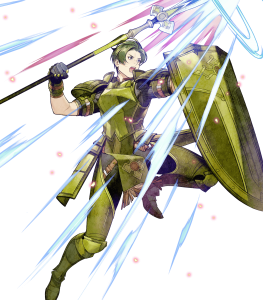 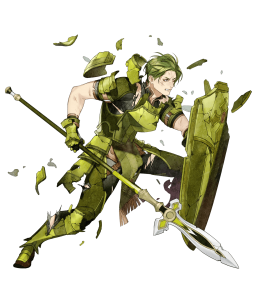 +ATK: An Attack Asset proves to be Forsyth’s most important and beneficial Asset, as it is a Superasset that raises his base Attack by 4. Damage is crucial to all of Forsyth’s builds, making it the most flexible for any situation.

+DEF/+RES: A Defense or Resistance Asset ends up being worthy alternative Assets that can be taken as both seek to improve Forsyth’s physical bulk or magical bulk. A Resistance Asset in particular will allow Forsyth’s Resistance to be equal to his Defense with the Sol Lance equipped.

HP: While Forsyth’s natural HP is quite high, due to the nature of Sol Lance’s regenerative properties he would rather enjoy an increase to his raw defensive stats if at all. If he can avoid taking damage altogether in certain matchups, he can end up with an overall net recovery of HP.

-SPD: Forsyth’s Speed stat is an extremely low value of 20, and as such it is best to be dumped entirely as investing in his Speed is quite the task and overall not worth it over his other strong points.

A Forsyth to be Reckoned With (Mixed Phase Duelist)

Forsyth joins the ranks of Askr’s Order of Heroes, having taken a break from serving The Deliverance in order to act as a self-sustaining defensive juggernaut for any summoner lucky enough to obtain him. Forsyth’s stats are extremely favouring high HP, Attack, Defense, and Resistance while dumping his Speed entirely. On top of this, he possesses a unique weapon in the form of Sol Lance which gives him a means to take care of himself quite well.

Forsyth sports a very high Attack stat of 40, with a Superasset that can be taken to push his Attack to an even greater 44. His HP, Defense and Resistance are spectacular, and when Forsyth equips his unique weapon his Resistance gets a further boost of 3. His Speed is beyond saving being at a value of 20, but on the bright side this means that it is an easy choice for a Flaw stat. Forsyth’s statline is essentially a case of what you see is what you get; an extremely durable lance armor who can hit just as hard as the punishment he can take.

The Sol Lance is an interesting unique weapon that not only boosts Forsyth’s Resistance by 3, but it also allows him to heal 10 HP whenever he strikes his opponent. Even if Forsyth is to deal 0 damage in a matchup, he will still get this 10 HP recovery during combat. Paired with his natural Bold Fighter, even a base kit Forsyth will be able to heal up to 20 HP during combat if he initiates, making him even bulkier than his stat spread can suggest.

Forsyth is not without his issues, and his biggest glaring issue is the fact that his Speed value is extremely low. While Forsyth can secure follow-up attacks through follow-up securing skills such as Bold Fighter, this means that Forsyth is completely hard countered by any instance of follow-up blocking Skills such as Null Follow-Up. Forsyth while extremely durable, must also be wary of the fact that anti-armor weapons are very common in modes such as Arena or Aether Raids. His durability and sustain can only help so much against effective damage, and many opponents will be able to exploit his poor Speed to hit him twice with lethal damage.

Overall, Forsyth proves to be an immensely strong lance armor with strong durability and Attack alongside unique sustainability through Sol Lance. While he sports some competition with other blue armored units, he is able to stand on his own two feet fairly well and be a reliable defensive unit. This soldier will gladly fight on the front lines for you, though he may require your help to drag Python to the battlefield.

Optimized Statline for Attack and Durability

Forsyth’s Attack, HP, Defense, and Resistance are all sitting at very high values, making his strengths in his statline clear cut. They can be further improved with an Asset, with an Attack Asset in particular raising his base Attack by 4.

Sol Lance is a unique weapon that makes Forsyth look even more durable than he lets on, as he will heal 10 HP whenever he attacks, even if he was to deal 0 damage during combat. This sustainability can keep him alive for longer, as well as make him self sufficient in terms of healing himself back into the HP ranges for Skills such as Special Fighter.

His low Speed, while an easy stat to take a Flaw in, can hurt him when he runs into Skills such as Null Follow-Up, as Forsyth is completely reliant on follow-up Skills in order to follow-up attack.

Effective damage can threaten Forsyth immensely, even if his defensive stats are at very high values. Anti-armor weapons are very common in competitive modes such as Arena, making it a common problem to watch out for.

This is a recover-and-heal build for Forsyth. Sol Lance restores 15 HP every time Forsyth attacks, and Sol helps with the HP recovery, with "Death Blow 7" boosting Forsyth's Attack. Mystic Boost restores Forsyth's HP after combat, and it disables skills like Wrathful Staff and weapons that calculate damage based on Forsyth's Def/Res. Reciprocal Aid is for healing others, and Armor March is so Forsyth and other armored allies get moving.

Forsyth is a strong unit that can heal himself with his Sol Lance.
By using Noontime, you can keep Forsyth very healthy.

Use Distant Counter to keep healing him and deal a lot of damage to the enemy.

Using Special Fighter allows us to get more access on Noontime.

Atk smoke will reduce the atk of the enemy's unit with the highest atk, which will let home survive more easily

Quick Riposte allows him to double in the enemy phase, and he will use Noontime every second atk as long as he has more than 70% of his HP.

This build is so simple that looking at the skills and best boon for it (+res), 45 in def/res are monstrous and with distant defense those 45 defenses turn into 51 gargantuatic bulk, any distant attacker that is not called legendary alm will struggle to shot down this absolute unit

Support Unit Build-A-Thon
So here’s the thing, I love support units. The flashy offensive nukes get all the…
Merge or fodder: Sothis
Since I realized I do have quite a few Sothii even after foddering a few I have enough…
Yune vs Abyssal Duma (True Solo)
https://youtu.be/ioO7MHnU_l4 A bit of a long clear, tried to speed up some of the more…
How should I build my L!Seliph?
Screenshot_2020-07-02-10-47-18-083_com.nintendo.zaba1080×2340 1.34 MB So Chrom doesn…
Duo's Hindrance
Anyone tried this out lately? I had a Fonz visit my house and immediately activated…
Read More