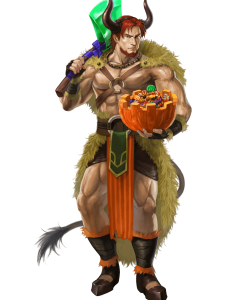 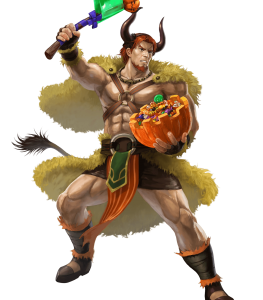 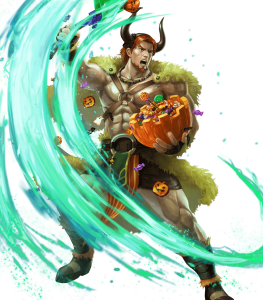 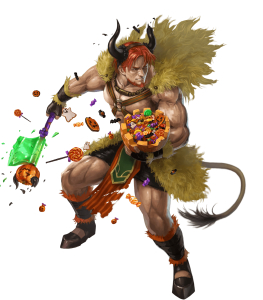 A build aiming to make Dorcas a monster on both Player Phase and Enemy Phase given high investment, although can be adjusted for low investment to provide an adequate combat effective build as well.

In terms of delivering pure damage, Halloween Dorcas would prefer to take a Slaying Axe to decrease his Special cooldown. Dorcas’ default Hack-o’-Lantern+ is also a great choice of weapon that can be used instead, allowing Dorcas to avoid having to deal with an enemy Special proc during combat. Either an Attack refine can be taken to improve Dorcas' damage output or a Defense refine to both increase his bulk and the amount of damage Bonfire and Ignis will do.

Swap is a good option as an Assist skill to get Dorcas into position to bait an enemy attack. Pivot is also a decent choice as well that can perform the same function albeit in a slightly different way.

Bonfire can be taken to give Dorcas very quick Special activations while Ignis will allow him to deal massive amounts of damage at once. Aether can be taken for sustain and arena scoring as well.

Steady Breath will work very well on Dorcas, allowing him to either immediately activate a very powerful Bonfire on Enemy Phase if he is running Slaying Axe. Brazen Atk/Def is another great choice that will provide a huge damage boost to Dorcas, but it requires him to first reach the required HP threshold which can be inconvenient to do at times. Sturdy Stance is still a great choice though if the more premium skills are not available, providing a solid boost in Attack and Defense on Enemy Phase.

Like with so many other armored units, Bold Fighter is the preferred choice of B slot, allowing Dorcas to double on Player Phase and decreasing his Special cooldown. If Bold Fighter is not available, Dorcas’ default Wary Fighter is a serviceable alternative that will help offset his very low Speed. Vengeful Fighter can be a decent option as well if one decides to run a defensive seal.

The C slot should ideally be either a self-buffing skill such as Odd Atk Wave or a support armor skill such as Armor March. As Dorcas will have a large HP pool when his refined weapon is taken into account, he can also run Panic Ploy quite well. A more common armor oriented team skill such as Ward Armor can be helpful as well.

The Quick Riposte seal will allow Dorcas to double on Enemy Phase, complementing Bold Fighter very well which allows Dorcas to double on Player Phase. It should be noted, however, if one is running Wary Fighter in the B slot, that Quick Riposte should NOT be used as the seal slot as they will cancel each other out, effectively making it a useless combination. Aside from Quick Riposte, Close Def and Distant Def are both great options to help improve Dorcas’ survivability as well as increase the amount of damage he will be doing with Defense scaling Specials like Ignis and Bonfire.

With the highest base Attack stat in the game, it’s no surprise that Halloween Dorcas can run a Brave Axe build very effectively. While Winter Chrom and Legendary Hector are capable of dealing more damage given an Attack Boon, Halloween Dorcas is not tied to the gacha and is a reward to anyone who participates enough in Tempest Trials, making him a great alternative option for running this powerful build.

Aether is taken for sustain and is the preferred choice for Arena Scoring, while Ignis can be taken for pure raw damage.

Death Blow is taken to push Dorcas’ Attack to even more monstrous heights when he initiates.

Bold Fighter makes this build far scarier, allowing Dorcas to quad attack every time he initiates. With the decrease in Special Cooldown thanks to Bold Fighter, Dorcas will also be able to activate Ignis or Aether every time he initiates. Dorcas can take Wary Fighter instead to help him on defense, but his damage output will be much less impressive on Player Phase without it.

The Atk Wave skills will work great on Dorcas to maximize his damage output. Aside from them, Dorcas can run an armor team oriented skill such as Armor March or Ward Armor.

Attack +3 is a great choice of seal, as the extra boost in Attack will be really appreciated considering Dorcas will be attacking 4 times with this build. Armored Boots is an interesting option if Armor March is not being run on the team, and will greatly improve Dorcas’ mobility and ease of initiating on enemy units.

Dorcas has the highest base Attack stat in the game of all units, sitting at a very impressive 41. Only a few units are capable of surpassing Dorcas’ base Attack unmerged, but they require having an Attack boon.

Halloween Dorcas is available to anyone participating in the Tempest Trials he is a reward from, making him a widely available unit that most players will be able to build.

Although this means his movement is limited, being an armored unit means Halloween Dorcas has access to the broken Bold and Vengeful Fighter skills, greatly helping his maximum combat potential.

At 25 base Speed, Dorcas will almost certainly always be doubled by the majority of enemies. Luckily his physical bulk is very good, often not making it a problem, but virtually any mage or dragon with decent Speed will be able to deal heavy damage to him.

As with all armored units, ideally Halloween Dorcas will want to be put on an armor team that has Armor March in order to help offset his poor movement.

This build aims to protect magic nukers from melee units while also packing a punch as retaliation thanks to how quickly his aethers charge while counterattacking. Thanks to Steady Breath, A/D Near Save and Atk/Def Bond 3, H! Dorcas will endure a lot of hits from the phisical side and heal back instantly with Aether. Also, Vengeful Fighter allows him to ignore his really bad speed.

The reason behind running him with Hack-o-Lantern (besides that it's fitting for the unit, and makes the build a little bit cheaper), it's to avoid units with skills that can cripple our tank's defense like moonbow, and powerful skills like aethers, or ruptured skies, in general, any skill that might put H! Dorcas in danger. And Pivot, well, it helps patch a bit armored units' movement.

Being a dorcas fan I want to give him as many fun builds as possible. This build is easily the most fun build I have on Halloween Dorcas. Basically you get attacked, proc sol and heal, if you get doubled, two sol procs, you'll be hearing his special proc voice a lot with this set.

Specials: Bonfire scales of his high defense stats. Dragonic Aura is a weaker alternative. Moonbow is weaker, but faster and helps versus high def melee enemy.

A. Sturdy Stance is free and a fantastic synergy, keep it.

B. Wary Fighter is free, shields Dorcas from doubles. Dorcas overcomes the penalty with Slayer Axe instant Moonbow or Glimmer and his (currently) highest in game base attack.

H! Dorcas comes with an absolutely monstrous Atk stat complimented by his unit type and his impressive physical bulk. With access to Bold Fighter and exclusive Armor buffs, H! Dorcas becomes a hellish player phase unit instantly doubling enemies with his giant Atk. Add Brave Axe+ and Death Blow 3 and you get a unit quadding his target with a ridiculous 55 Atk! And that’s without any buffs from skills like Hone or Goad Armor. Add one of each respectively and you can potentially have H! Dorcas quadding an opponent with a hulking 65 Atk. Which in my option is pure insanity! Pair that offensive power with his natural bulk, Quick Riposte to add to his defensive power during enemy phase, Bold Fighter ( greatly reducing Aether’s cool down time nearly guaranteeing an Aether firing of every time he’s in combat), and Aether (65 neatral Atk + 30% Def reduction and 50% damage healed? Yes please) and you get a unit who is nearly unstoppable. I look forward to this F2P unit and I am excited to see who else realizes his potential. While this build is high investment, it will be totally worth it. IS may have just given us potentially the strongest player/mix phase unit in the game.

Is this necessary? No, but for the person who really wants to use Dorcas this is about the most you can get out of him.Dorcas is a fantastic enemy phase unit with a stat line similar to Love Abounds Hector.Sack o' Gifts+ works wonders with any enemy phase unit though his base weapon can be a good budget option. If already paired with an armor march ally, Dorcas can make use of Panic Ploy from a 4* Garon or a 5* Valter.