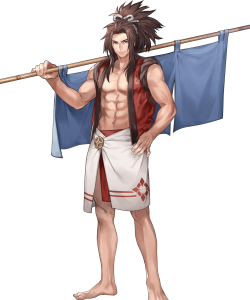 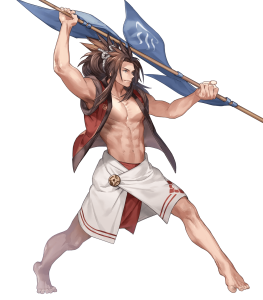 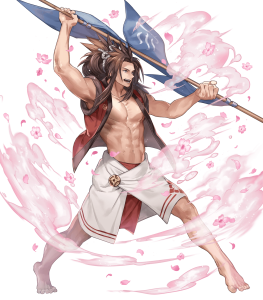 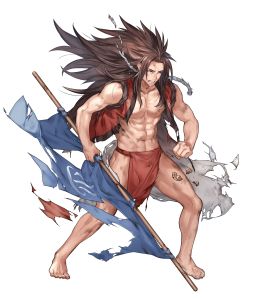 This is a fairly standard offensive set for Ryoma. His offensive statline is nearly identical to that of Cordelia, which means that he can run the exact same sets as her to nearly the same effect. Ryoma’s strong offensive statline makes him very well suited toward a Firesweep set, as it offers him a high level of safety since the only way he’ll ever be counterattacked is if his opponent is using Null C-Disrupt.

The main component of the build involves combining Moonbow with the Heavy Blade Seal, as this allows Ryoma to activate his Special every combat if he can activate Heavy Blade and double his opponent. Alternatively, an aggressive approach involves running Galeforce along with Heavy Blade as an A skill and the Quickened Pulse Seal; this setup relies upon Ryoma getting substantial support from his team, as his base 50 Attack is highly unlikely to be able to activate Heavy Blade with any sort of reliability. The ever increasing stats of newer units means that Ryoma will greatly appreciate heavy team support in the form of both buffs and debuffs on his opponents in order to maximize the chance that his Attack will be higher than his opponents.

Atk/Spd Solo is one of the strongest A skills available, and works perfectly for this setup. If unavailable, then Life and Death and Swift Sparrow are both acceptable options, since their downsides are easily mitigated by Firesweep. Heavy Blade as an A skill is only recommended for a Galeforce set, and only if accompanied by heavy team support.

Hit and Run is a fantastic skill that will help keep Ryoma safe on Enemy Phase after attacking, as he is vulnerable due to Firesweep preventing him from counterattacking. If this isn’t a concern, then Chill Def or his base Chill Spd will work great as he will be able to support his team as well as improve his own combat performance through the debuffs.

Ryoma’s C skill is highly flexible, but a flier buff skill like Hone Fliers is recommended since Ryoma is much better in a flier team. Otherwise, his base Odd Def Wave or any other C skill can work.

This build is similar to the first but is a bit more broad in scope, as it doesn’t have a Firesweep weapon forcing it into Player Phase-only combat.

Ryoma has a number of options at his disposal thanks to his strong statline. He can combine a Slaying Lance with Galeforce, the Heavy Blade Seal, Desperation, and a strong offensive A skill like Atk/Spd Solo for repeated Galeforce activations. Alternatively, he can swap out Galeforce and the Heavy Blade Seal for Moonbow and the Quickened Pulse Seal in order to run a strong offensive generalist set that can repeatedly activate Moonbow for strong damage output; this build can work with most B skills, but good choices include Desperation, Chill Def, Chill Spd, and Swordbreaker. Finally, Ryoma’s base weapon, It’s Curtains…, can work with a Galeforce set, particularly on maps where Ryoma is unlikely to activate Galeforce more than once anyway (such as Arena). For combining It’s Curtains… with an offensive Special, see the third build below.

All of the above options work best with a strong offensive A skill like Atk/Spd Solo, though other skills like Swift Sparrow or Fury will work fine if it’s unavailable. Ryoma’s B skill is a bit dependent on his choice of weapon and Special, as noted above. Swordbreaker is notably a good choice as although Ryoma has strong Speed, he can still struggle to double exceptionally fast sword units like Ayra and Karla. Finally, his C skill is entirely up to preference; if he’s in a flier team, then a flier buff would work best. Otherwise, his base Odd Def Wave is perfectly acceptable.

Nothing to Hide (Offensive Nuke)

This set is a bit gimmicky, but aims to make the most of Ryoma’s base kit. While Ryoma’s strong offensive statline makes him better suited for offensive sets like the ones above, he also has enough Attack and Defense to be an effective one-shot nuker thanks to his base weapon.

Combining It’s Curtains… with the Quickened Pulse Seal allows Ryoma to have Bonfire ready at the start of a map, which then allows him to unleash a big damage nuke on whoever he attacks. Note that this nuke isn’t so exceptionally powerful that no unit can survive it; bulky units have a good chance of surviving, particularly if they’re green. Thankfully, Ryoma’s high Speed will typically allow him to double most enemies that manage to survive this nuke. Sturdy Impact’s ability to negate enemy follow-up attacks is highly useful in this regard, as it will help keep Ryoma alive should he run into an opponent he can’t finish off in one round. It also offers higher damage output over Atk/Def Solo due to the higher Defense offering more damage from Bonfire, but Atk/Def Solo will work just fine if Sturdy Impact is unavailable.

As this is a one-shot build, boosting Ryoma’s damage output as high as possible is very important, so a self-buff like Even Atk Wave can help ensure he can get there. His base Odd Def Wave is also usable on a budget, since the extra Defense will still increase his Bonfire damage. If buffs are available from Ryoma’s team, then his C skill can be swapped out as needed to suit the team.

Ryoma has joined the ranks of units who gained more stats as a result of removing their clothing, though in this particular case it’s less of a direct comparison since he swapped out Raijinto for a flag and now rides a flying mount. His strong offensive statline is perfectly suited for an offensive flier, though this does make him a bit dull as a unit since there are already a large number of lance fliers that also have strong offensive statlines (including Cordelia, a unit he almost completely outshines).

While Ryoma’s strong offensive statline is best suited for a Firesweep build, he is flexible enough that he can use pretty much any lance and excel. His defensive stats are high enough that he isn’t reliant upon a Firesweep Lance’s ability to negate counterattacks simply to survive. He can likely survive a hit, but he isn’t quite bulky enough to tank multiple attacks so he’ll still need to be wary of enemy offensive threats.

Overall, Ryoma is a strong offensive flier that is best suited to flier teams due to their unique buffs as well as access to unique mobility-based skills.

With 35/36 Attack/Defense, Ryoma is an offensive powerhouse that can handily deal with a wide variety of threats.

Most units with strong offensive statlines like Ryoma have poor defenses, but he actually has decent enough defenses that he isn’t particularly in danger of getting KO’d in a single counterattack from non-green enemies.

As a flier, Ryoma enjoys superior mobility as well as access to unique flier buffs, including their unique mobility-based skills.

While Ryoma’s base kit is hardly meta shattering, it can certainly work well enough on it’s own. Even just replacing his weapon can work quite well for him.

As a flier, Ryoma has a weakness to anti-flier weaponry like bows and Merric’s Excalibur. He can mitigate this with Iote’s Shield, but doing so carries a heavy opportunity cost that will severely impact his effectiveness.

One of the downsides of being a flier is that Ryoma has relatively poor skill availability; while fliers get unique mobility-based skills like Guidance, they lack access to strong skills like Flashing Blade or Null C-Disrupt.

Received this wonderful man on the banner... terrible bane, but decided to give him more defense and attack with the reprisal lance with the defense upgrade.

Since you would want him to maintain the Atk/def solo, uses shove.

Special could be better, bonfire, but moonbow is fine.

Hostile Springs Ryoma doesn't have the best RES but with the right team and right builds, he's actually pretty good. Forging his weapon to be +RES can help boost it. Also having a dancer with Torrent Dance can be a big asset.
Since he's an easy target in certain situations, it's good to have someone on the team with Draw Back or Swap to get him out of said situations. Even a dancer or singer can get him out it. A good flier to have on the team with him is Eir. Although she has the weakest defense, her attack is already really good and would get better with his Hone Fliers ability.