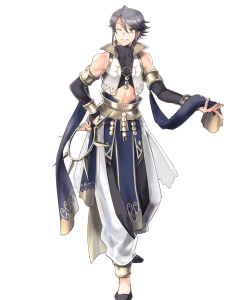 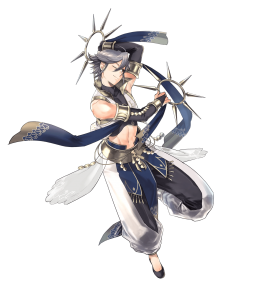 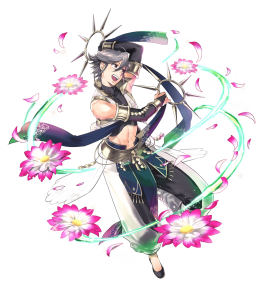 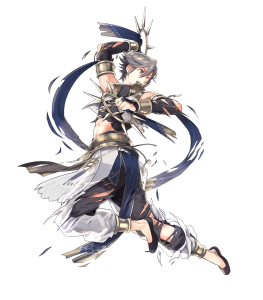 I Can't Believe It's Not +10 Performing Azura! (High Investment)

"Bare" is one word that accurately describes Performing Inigo, and it's not just referring to that lacy outfit. With Dance at his disposal, Inigo at least performs as well as any refresher unit is expected: he simply comes in and uses Dance to grant finished teammates another action. Much like his fellow performers, this fact alone makes him worth working with. When it comes to competitive performance compared to others with Sing, Dance, or Gray Waves, however, Inigo is left to brag only of a few shared traits and an admittedly dashing figure.

As an infantry tome dancer, Inigo must deal with an exceptionally low base stat total, which translates to only a modest distribution across all of his stats. At a base value of 33, his Speed can only be called sufficiently decent, while his base Attack of 28 barely allows him to make an impact on all but specific opponents. His below-average defensive stats, while not unexpected of refresher units, are an inherent hindrance to his contributions outside of dancing.

The existence of newer units and threats also does no favors. Null Follow-Up and the general preference for Legendary Alm (who can blow past the standard Gronnraven build) as a colorless bow hero in the metagame stings, especially seeing as Inigo's bulk was barely enough to tank the like of Brave Lyn and Reinhardt previously. Additionally, the introduction of Adrift Azura as a directly competitive unit—that can be summoned anytime via Heroic Grails, no less—does Inigo's seasonal availability no favors. Reyson and Leanne puts Inigo's base weapon to shame by passively healing with no initiation needed, while also offering three-space movement under correct conditions. Finally, Azura's legendary form is more widely used due to rotating availability and an overbearing variety of supportive perks outside of singing, which almost kicks most of her competition, Inigo included, out of showbiz.

Despite the odds being stacked against him, however, Performing Inigo struts as confidently as ever. To say nothing of his ability to refresh units, Inigo's status as an infantry ranged unit gives him several options that other dancers can't have or don't have room for. Though his list of useful green tomes is limited, the few he regularly uses are just enough to get his side jobs out of the way. His low fodderability (aside from a largely unused dance skill and weapon) also makes it easy to keep at least one copy of him, thus making him minimally available for Arena Assault modes and other game modes.

The main reason to use this lech, Dance at minimum provides a ton of utility by granting teammates with an additional turn to act.

Inigo's access to a variety of infantry-based skills, including Infantry Pulse, Infantry Breath, Infantry Rush, Null C-Disrupt, and others, keeps him fresh, competitive, and helpful despite several other dancers also having access to these.

33 Speed isn't as flashy as Inigo's ribbony looks, but it is enough to protect Inigo from a few natural doubles in relevant matchups. With weapon refinery, proper A slot skill investment, and minimal teammate support, this fact only becomes stronger.

Frailty is expected of refresher units, but Inigo's balanced raw physical 59 and magical 57 bulk can only be described as barely sufficient. Without bandaid investment in his HP or using specialized tomes against certain units, he will typically only take a stray hit (if any) and nothing more.

Average Offense and Weapon Use

A base Attack of 28 isn't exactly helping Inigo contribute much outside of dancing and targeting specific foes with the proper tome. Inigo's repertoire of weapons he can actually use well is also rather low due to his limiting stats and a relative lack of variety in green tomes.

Inigo is not only limited to a single seasonal banner a year, but also shares green coloring with Performing Azura, who is considered the better unit of the two and the banner entirely. Meanwhile, a variety of arguably more useful refresher units can be obtained year-round or have frequently reoccurring summoning events. Adrift Azura, in particular, can be obtained at any time through Heroic Grail summoning while having a unique preferred weapon of her own.

This is probably Inigo's most limiting factor. Compared to other refresher units with better stats and superior amount utility outside of dancing (see: Hoshidan Festival Micaiah and Legendary Azura), Inigo simply doesn't offer enough. His usual niche as a Gronnraven user is also very specific and sees restrained usage versus specific units in Arena Assault. 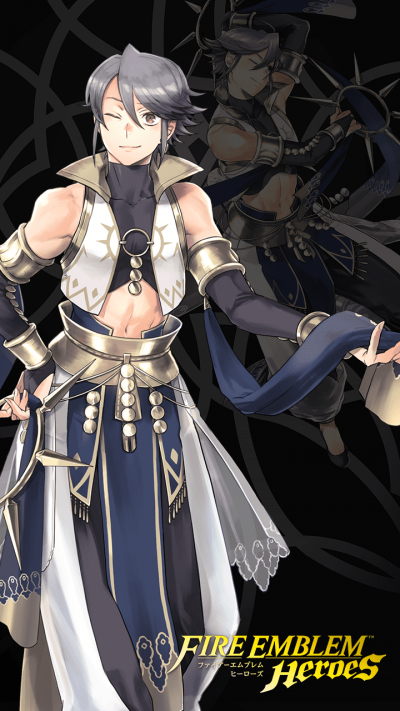