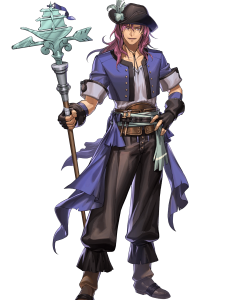 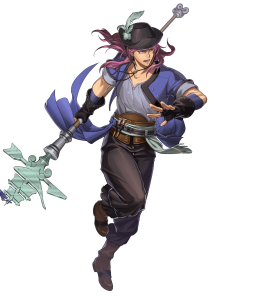 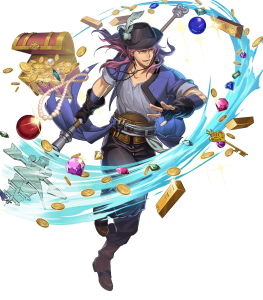 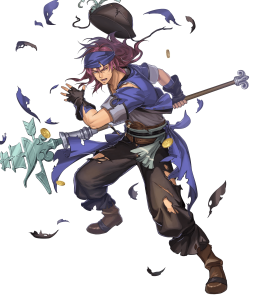 As an Infantry unit, Geese is afforded a plethora of advantages, such as a lack of weaknesses to many forms of effective weaponry and access to a wide variety of powerful skills, such as Spurn, Special Spiral, and Null Follow-up.

Geese’s Statline is also very solid overall aside from his resistance, and with a 38/35 offensive spread in addition to his fairly high 46 HP and a good base 32 Defense, Geese will have very little problems whether he’s dishing out hits or taking physical damage.

Geese’s base 21 Resistance is quite lacking, and it leaves him extremely vulnerable to being KO’d by magic using foes without the aid of a Resistance Refine or Resistance increasing skills such as Spd/Res Solo.

Geese’s lack of an exclusive weapon means he stands out less when compared to other lance infantry units with similar statlines and powerful exclusive weaponry, such as Female Kris and Apotheosis Anna.

Geese! He's one of my favorite FE characters currently playable in Heroes and I'm super glad that despite his very low amount of CYL votes, he managed to get in as a seasonal demote, and a really cool one at that! Hell, design wise this is basically just Geese with a new hat. Im a huge fa- oh, right, the build.

Flowing Lance is great. +Spd for Frenzy.
Reposition Test
Noontime for sustain
Atk/Spd Solo 7 to bump up his offensive stats, as while his Atk is solid his Spd is just okay.
Frenzy isn't on the unit builder as of now, so here's Repel as a substitute.
Rouse Atk/Spd for that extra bonuses when alone. Will replace with Atk/Spd Menace if I get it.

Overall this build is extremely strong and allows Geese to go toe-to-toe with even fast foes. Good. He deserves to be able to.

With +Spd boon, speed refine, LnD and the Spd/Res solo seal, Geese can reach high amounts of speed and get great use out of Repel or any similar skill. His high HP makes him a great Panic Ploy user as well plus it makes him incredibly bulky with Repel. LnD can be replaced with any other offensive A slot. My Geese is currently +2.