Community Posts with Keyword Ranulf All 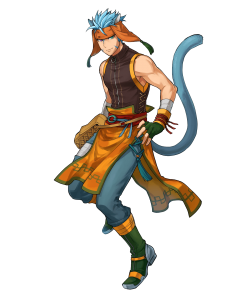 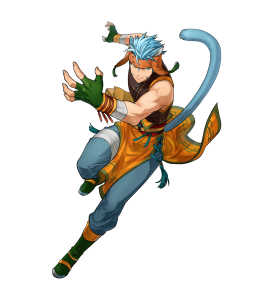 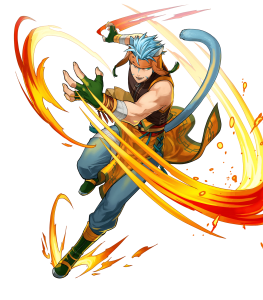 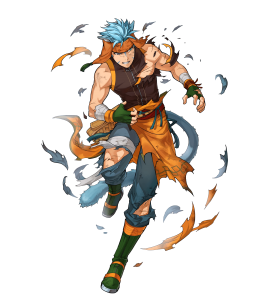 Thanks to the power of his personal weapon, Covert Cat Fang, Ranulf possesses the unique ability to perform as a rather formidable combatant and potent support unit simultaneously, allowing him to be overall quite flexible in the way that he can function — a factor of which this build aims to take full advantage of. That being said, however, this build does have Ranulf take a primarily support-inclined role and as such, any choice of IVs can work here, though Assets to his Attack, Speed, or Defense stats are still preferable options if available.

In contrast to the first set, this build sees Ranulf take on a considerably more aggressive playstyle, showcasing a much heavier focus on his offensive potential as opposed to his supportive capabilities, though he still remains a reasonably solid support unit to his own right thanks to the inherent buffing properties of Covert Cat Fang. For his IVs, Ranulf most greatly benefits from receiving an Asset to either one of his offensive stats, with an Attack Asset being slightly more preferable than a Speed Asset to enhance his raw damage output as well as his proficiency at utilizing the Heavy Blade seal. Nonetheless, both are ultimately great options.

Although Ranulf is typically more suited towards use in the Player Phase, he can still perform surprisingly well when equipped with a defensively oriented build thanks to his combination of good physical bulk and high Speed, as well as the fact that the +3 Atk/Def in-combat boost from his weapon is not restricted to a specific phase. An Asset to either his Attack or Speed stat will still be his best choice of IVs, but a Defense Asset may also demonstrate to be an effective option as well to directly reduce the amount of damage he receives from physical attacks.

Taking inspiration from his appearance in Radiant Dawn, the carefree cat laguz Ranulf makes his long-awaited debut in Fire Emblem Heroes as a green beast unit, entering the fray alongside his Gallian comrades. Statwise, he boasts high Speed and excellent physical bulk, inherently possessing all the makings of a formidable duelist capable of comfortably fighting foes head-on without needing to use skills like Desperation. Combined with his status as a cavalry unit (despite his lack of a mount), Ranulf can perform as a surprisingly decent combatant to his own right. Ranulf’s defining feature, however, is his personal weapon, Covert Cat Fang.

In addition to granting him a passive +3 Defense boost, Covert Cat Fang provides him with good supportive capabilities and offers any allies within two spaces of him with a sizeable +3/+3 Atk/Def in-combat buff. Unlike other similar skills, however, this weapon is unique in that it also allows Ranulf himself to benefit from the buffs that it grants, enabling him to further build upon his key stats in addition to letting him function as a solid support unit without necessitating that he sacrifice his offensive potential in order to do so. It also comes with the typical benefits associated with beast weapons and gives him the ability to transform, provided that he is either adjacent to another beast unit or dragonstone wielder, or not adjacent to any units at all at the start of the turn. Upon transformation, Ranulf gains +2 Attack but more importantly, he attains the ability to deny his opponent’s follow-up attack and inflict a substantial -4/-4 in-combat Atk/Def debuff upon initiation, making him a formidable attacker under the proper circumstances.

However, Ranulf does have his fair share of weaknesses. While his status as a cavalry unit does allow him access to useful advantages over his infantry counterparts, it conversely comes with some notable disadvantages, most notable of which being the movement type’s limited skill availability, inability to traverse through certain terrain, and weakness to cavalry-exclusive weaponry. Additionally, Ranulf’s base Resistance stat is downright poor and spells trouble for him when facing off against magical damage dealers. Overall, despite these weaknesses, Ranulf is a solid unit whose unique mix of offensive and supportive utility allows him to be an incredibly flexible ally that can fit well into a variety of different team compositions.

Ranulf’s unique personal weapon, Covert Cat Fang, provides him with the ability to grant himself  and any ally within two spaces an appreciable +3/+3 Atk/Def in-combat boost. With proper usage, Covert Cat Fang allows Ranulf to heighten his entire team’s stats to reasonably high extents, making him an incredibly flexible ally.

Resting at a neutral base value of 37, Ranulf’s Speed is quite good and capacitates him to perform follow-up attacks against opposing foes with relative ease. When taken into consideration with the bonuses he can gain through his PRF, Ranulf can function as a surprisingly capable combatant if necessary.

Ranulf is exceedingly adept at trading blows with other physical damage dealers, being able to shrug off the brunt of their attacks in large part due to his strong base physical bulk of 73 — and thanks to the power of Covert Cat Fang, he can elevate it further to an effective 83 under the proper circumstances with no outside support, making him even bulkier than his base stats would imply.

As a cavalry unit, Ranulf has access to several key advantages that he can use to enhance his overall potential significantly, namely exceptional mobility as well as his ability to benefit from class-exclusive buffs like Hone Cavalry.

On top of allowing him access to even more class-exclusive buffs, Ranulf’s status as a beast unit allows him to inflict a substantial -4/-4 Atk/Def in-combat debuff and deny his opponent’s follow-up attack upon initiation when transformed, functioning essentially as a miniature version of Sturdy Impact. This is greatly beneficial in complementing his already decent offensive capabilities in the Player Phase.

Ranulf’s status as a cavalry unit prevents him from gaining access to a variety of different skills, greatly limiting his overall potential. In addition, he suffers from a crippling weakness to cavalry-effective weaponry and is hindered by certain terrain such as trenches.

Ranulf’s pitiful base Resistance stat of 17 makes it nearly impossible for him to effectively take on sustained offensive pressure from opposing magical damage dealers, making it crucial to his longevity that he be kept out of reach from such foes as he will otherwise suffer heavy amounts of damage.

Let's be honest: if you're looking up builds for Ranulf, you're probably already dead-set on using him. I don't blame you, of course. He's a fun character and sports delightful support potential. His weapon has plenty of synergy among other easily available skills, making building Ranulf none too difficult.

Speed is his boon of choice, as even his less-than-stellar attack can be enough to ORKO units should he secure a double. Preventing enemies from doubling him strengthens his bulkiness, possibly even allowing him to survive combat with magic units despite his poor resistance so long as he doesn't need to endure a second hit. Both defense and attack boons are acceptable as well, though those stats already receive boosts from Covert Cat Fang, whereas Ranulf's speed does not.

For his A-slot, Atk/Def Unity is the best option, since it synergizes perfectly with his weapon's effect. If that's not available to you for some unimaginable reason, a "bond" skill (or "form" skill, if you're desperate) isn't a terrible choice, as Covert Cat Fang already requires him to remain in close proximity to his allies. If you would prefer a more consistent stat boost, Fury is always a viable option, though there are few instance in the game as a whole where it isn't. Life and Death can also work if boosting his offensive potential is your only goal. His physical bulk is sufficient for him to function as a serviceable duelist even with the -5 defense from Life and Death. The same cannot be said for his magical bulk. After adding the penalty from L&D to his already poor resistance, Ranulf will struggle to survive any magical damage at all. Again, it's a serviceable option, but hardly the best one available.

Ultimately, his A-skill is relatively inconsequential. His support potential is much more important to capitalize on. "Chill" skills help him perform this role, though there are plenty of other B-skills Ranulf would make good use of. "Ruse", for instance, make his existing Rally even more effective. "Link" skills are also workable options if you would rather have Reposition in his assist-skill slot, as it would allow Ranulf to both buff other units and grant them additional movement, optimally doing so without them leaving Covert Cat Fang's area of effect.

Though Ranulf's attack isn't exactly stellar, the advent of Joint Drive Atk (or any of the Joint Drives, really) instantly skyrockets his viability as both an offense unit and a support unit. Since Covert Cat Fang's effect sports the same conditions as Joint Drive, there really isn't a strong argument for running any other skill in that slot, save for the fact that Joint Hone Atk and Atk/Def Unity can both be inherited from Brave Dimitri. If you just don't have a spare copy to give out or are unwilling to do so, other "drive", "ward", or "goad" skills can help his support potential, though they lack the ability to boost Ranulf's own combat ability.

Stacking another "drive" skill as his seal is simply the icing on the cake, allowing him to grant massive boosts to nearby allies' stats just by standing around and looking pretty. Really, that's what Ranulf would want, isn't it? A close/distant guard seal can provide a similar, albeit more situational, effect. If you instead prefer to improve Ranulf's combat abilities, a "bond" skill as his seal can fill this role. Atk/Spd Bond is probably the best choice here, with Spd/Def Bond in second place.

Maximizing Ranulf's ability as a support unit allows him to contribute without needing to lift a finger while still being able to dish out damage of his own should the need arise. Placing him alongside a unit with Bonus Doubler lets him boost their stats to astronomical levels simply by rallying them and staying within 2 spaces. Even without the much-coveted Bonus Doubler on an ally, Ranulf's presence can still turn even the squishiest of units into serviceable duelists. The real tragedy is that most of the best skills for hhim to use have to be inherited and aren't exactly easy to come by.

This set aims to maximize Ranulf’s enemy phase potential by stacking Def boosts. This make his special hit harder, which compensated for his middling Atk stat. His naturally high Spd prevents a lot of units from securing doubles on him.

His weapon conditionally helps himself and his allies as well with Atk/Def+3.

If you don’t have Steady Stance 4, 3 still works well and is more budget-friendly. Atk/Def Bond or Atk/Def Solo are also viable options.

His innate Chill Atk can increase his defensive abilities by lowering his enemy’s offense.

The alternating Def Waves between his C Skill and Sacred Seal will give Ranulf a constant +6 Def.