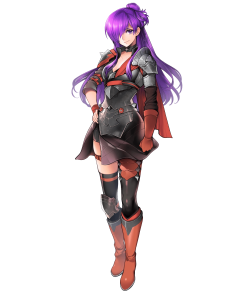 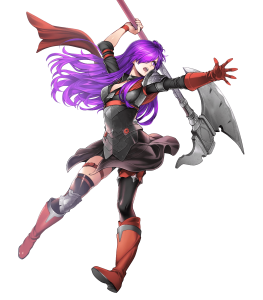 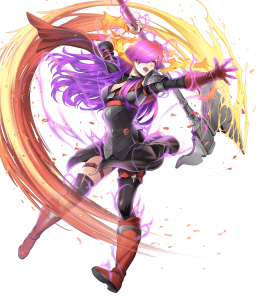 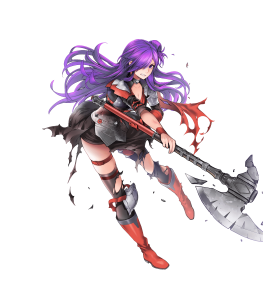 Shez’s unique axe comes with a variety of strong effects under various conditions, boosting her Atk and Spd, giving her an extra Special charge per attack, and reducing the damage taken from her foe’s first attack by 40%. While it lacks the ability to strike twice like Male Shez’s swords, it is still a strong and useful weapon, especially by the standards of units available at 3-4 star rarity.

Shez’s status as an axe infantry allows her to use great skills like Velocity, Time’s Pulse, and Vital Astra.

Shez’s base 41 Atk and 42 Spd are fantastic, and she has superboons available in both stats.

Shez’s defensive stats are also solid, with a middling base 38 HP and good base 32 Def and 34 Res.

At the time of writing, two copies of Shez are available for free by completing quests. Later, she will be added to the common summon pool at 3-4 star rarity.

Lack of Slaying Effect in Weapon

While Shez’s Crimson War-Axe is a great weapon, it does not have the “accelerates Special cooldown” effect that so many other melee infantry do, so it is slightly harder for her to activate some Specials.

Shez’s status as a melee infantry means that she can only move 2 spaces and attack adjacent enemies under normal conditions.

There are many, many other axe infantry available in Heroes, both 5 star exclusives with fantastic weapons like Scion Larcei or Ascended Hilda, as well as other demotes like Balthus and Atlas. While Shez has a good unique weapon and a great statline, putting her ahead of much of the competition, she is still similar to many other units.