Community Posts with Keyword Sigrun All 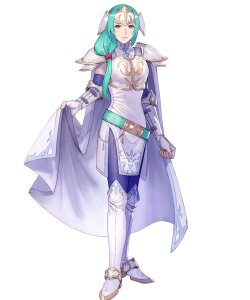 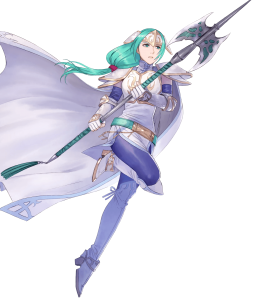 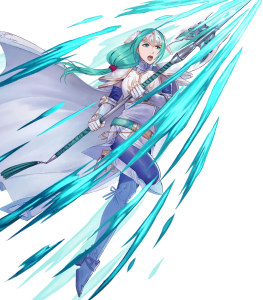 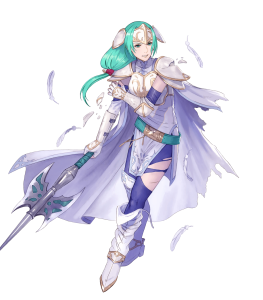 Sigrun is one of the few units to escape the confines of having a seasonal variant in Fire Emblem Heroes before their regular form, but this is a mixed blessing at best. She joins as a lance flier, an archetype that is already heavily overloaded with units (including those with powerful unique weapons that set them apart from the crowd). In this regard, Sigrun doesn’t really have a whole lot to separate herself from the rest, as her 32/36 offenses aren’t very impressive and are very comparable to the others.

What Sigrun does have, however, is notably stronger mixed bulk as a result of her having generally higher BST. 28/34 defenses make her a good candidate for a mixed tank, something that is rather rare amongst blue fliers. Unfortunately, her mixed tank capabilities aren’t particularly impressive, as flier skill inheritance restrictions make it impossible for her to have access to the best skills (and her lack of unique weapon really hurts her here).

Overall, Sigrun is a decent unit that is perfectly capable of handling an offensive lance flier role on a team as well as potentially acting as a decent mixed tank.

With 28/34 Defense/Resistance, Sigrun stands out a bit from most other lance fliers with her ability to handle mixed damage threats.

While 32/36 is not a particularly impressive statline these days, it’s definitely good enough for Sigrun to shine as an offensive attacker given the proper resources.

It cannot be overstated how overcrowded the lance flier niche is, and Sigrun’s lack of unique weapon to set her apart from the rest hurts her ability to stand out as an offensive threat. This doesn’t mean that she’s a bad unit; she’s perfectly serviceable, but units like Catria, Est, and Shanna have unique weapons that allow them to fulfill a function that Sigrun cannot.

This set revolves around the Pegasus Flight 3 skill, as Sigrun is probably the best user of it barring any 5* exclusive units. With full dragonflowers and merges, Sigrun will reach 44 res before buffs. This means she will inflict the full -7 atk/def against any unit with 30 res or lower (so long as she passes the very lenient speed check), making her deceptively bulky. Her native Reprisal Lance is useful for further patching up her middling atk, but the Flowing Lance is her best weapon choice due to its stronger effect. In either case, the res refine is chosen for synergy with Pegasus Flight. Aether grants Sigrun additional longevity, which is appreciated considering Sigrun can tank many incoming attacks at once with this build. Distant Counter is preferred over Distant Ward for her A slot as she can easily stack enough debuffs to patch up her middling defense and skyrocket her resistance to astronomical levels. Her assist skill is flexible, as is her C slot, though Atk/Spd Rein is the superior option and allows for additional stacking of debuffs. Her best seal is Iote’s Shield to allow her to counter bow users safely, which barely scratch her with this seal thanks to her massive -16 Atk debuff.

This build has performed exceptionally well in Abyssal content as well as Aether Raids offense. I fully believe that Sigrun is only rated as poorly as she is on the tier list is due to those running the site not knowing how to build her and never seeing her in action. If you try to use the site’s recommended sets (at time of writing at least) and build her like any other lance flier, you WILL be disappointed! However, Sigrun can easily outperform all other easily mergeable lance fliers if her superior bulk and access to debuff stacking is taken advantage of.

Disclaimer: there are several skills that don't show up in the build options. The actual skills used are Distant Ward/Pegasus Flight/Atk/Spd Rein.

Have you ever wanted to give mages a big middle finger? Do you get turned on watching a Bramimond do <30 damage? Are rally traps your worst nightmare? Introducing Sigrun, devourer of mages.

Flowing Lance is a given for any lance user without a prf weapon, the extra debuff and lull atk/def effect is too good to pass up on. The res refine works off of the inclusion of DW and Pegasus Flight, which both benefit from even more res.

Reposition is your standard movement skill, although another skill can be used if you want to keep proc'ng Flowing Lance.

Aether is used to help heal off damage, and double as away to keep Sigrun damaging def tanks. It can be banked after a round of combat, so I can save it for either a free heal or if I really need to nuke something. Iceberg is your best back-up option if you aren't running Heavy Blade, as it procs at the same time as Aether and the extra damage is more impactful than the healing.

Here's a hot take: Distant Ward is a better choice than DC. DC's biggest edge is being able to counter vs bows, but Sigrun needs Iote's Shield to make that work. Running the combo doesn't even give her any favorable matchups against popular bow units, so I feel it's reasonable to ditch DC+Iote and free up her seal. DW leans into Sigrun's magekiller role, with the added res being enough to push her into thresholds where even heavy hitters like Bramimond fail to 2-round her. DW's only flaw in this build is fighting dagger units, and they can be dealt with using the same partner you're using to fight bow units. I'll only consider DC+Iote if dagger units suddenly became more popular.

Pegasus Flight is the aforementioned heart of this build. With a res refine and a res boon Sigrun hits a base 43 res, which can cap out at 49 and even 54 with an Eir supporting her. P.F. also doesn't care about in-combat effects, so it's a nice anti-meta skill against drive stacking.

Atk/Spd Rein is mostly there to add onto all of Sigrun's other debuffs, helping bolster her res even more and compete in speed wars. You could run Pulse Smoke instead, but the debuff actually has a second purpose to it...

Hey, if you've been keeping track, Sigrun has managed to stack a -16 atk debuff. That's a lot of damage reduction. It also nukes the enemy's attack so hard, that the galaxy brain play is to run Heavy Blade as a seal. I'd like to point out the ridiculousness of how a res advantage can help proc HB. That said, most mages running an Impact skill and Sturdy Blow/Swift Sparrow can easily disable HB, so HB + Aether is better used in tank busting. If you want to play safe and focus on killing mages, you can still run Mirror Stance and Iceberg.

This is my Sigrun. I use Berkut’s Lance+ to add on to her already great Resistance. For the Assist Skill, I recommend Reposition, but you do whatever floats your boat. For a Special, use Iceberg or Glacies. Sigrun has great Resistance so it will be more better. To add on to Sigrun’s Resistance, run Resistance +3 or any skill that adds onto her Resistance to boost her ability to ploy. It’s recommended to use Spd Ploy and Def Ploy, but you can run Atk Ploy if you feel like Sigrun’s Attack isn’t too good. Def/Res Link is for support, but you can use any skill to replace Def/Res Link.

This is a budget build
With her already bulky res stat, i would suggest turning her into an anti mage/ anti dragon killer. Because dragons target melee units with RES based attacks (hence the if range is 2) this means she'll be able to tank most of the damage.

Reprisal lance+res is a good choice IMO, it gives defense, damage, and works well with mirror stance. You could change it out for slaying lance and make her a anti tank/dragon unit, but that's another build for later.

Swap works well for Sigrun here because it lets you move that extra 1 space INTO danger while getting your ally OUT of danger. She's the tank and she wants to protect her allies. The other option would be re-position.

Iceberg/luna/glacies all work good for her: Luna for those extra tanky units, iceberg for a quick bonus to damage, or glacies for that one hit kill. Depends on what you want out of her.

Here i chose mirror stance 2 because it allows her to build off the reprisal lance (+11 atk +4res total) and you can hero grail a Gharnef pretty easily or rank up a Silvia to rank 5.

I kept def/res link here because it bulks her defenses up quite well with swap. She can move in danger and gain extra resistance with it. (a total of +11 atk, +10 res, +6def)

For the c skill i went with Def ploy because of her already high resistance. It'll proc on most dragons excluding those high res dragons like Idunn.

The seal i went with atk/res 2 for that +2 in both stats. This allows Def ploy to work on other units more often, and gives her more bulk to defend and attack with. If you have a unit that synergies with swap like summer Hinoka or new year Fjorm, i'd rather go with a S rank bond with one of them, and change the seal to atk/res bond.

The Def refine puts her defenses at 32/34, and the cheap Speed +3 A Skill ups her speed to 39, enough to double quite a few enemies. She really shines on Enemy Phase, though, especially against melee attackers. With her B slot Def/Res link active and Close Def 3 seal, she can reach 44 Def and 46 Res, plus the +6 to Attack from Reprisal Lance. (So, under ideal conditions: 41/52/39/44/46) The C slot is flexible, I used Spur Res 3 for the mixed team while SP grinding, but it's ultimately up to preference/team comp.

This can certainly be improved upon, Distant Counter could be considered to use her against Mages, or Breath skills to reduce the Glacies countdown. But this is a cheap, easy to access build to make her into a decent defense flier