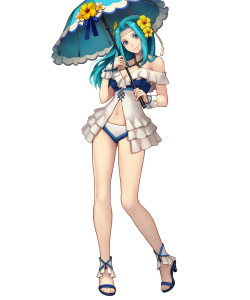 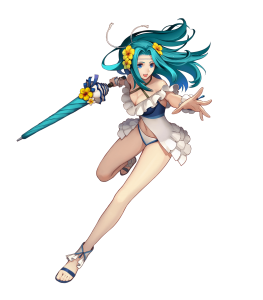 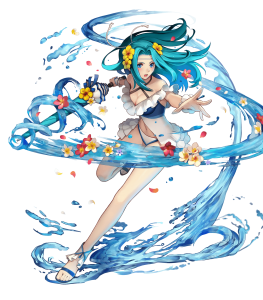 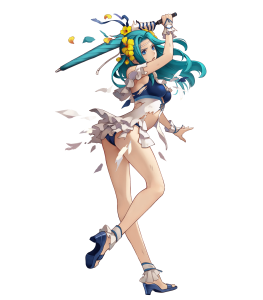 Another eldest Pegasus sister joins! Summer Fiora is a red sword-wielding flyer, and the older sister of fellow flier Florina. She fits in to a crowded genre of units, many of which have similar statlines. Although there isn’t much standing her out from the others (aside from her art), she’s well-rounded and a fine choice of red flier.

Fiora finds it tough to compete with sword fliers with their own personal weapons, as they have their own special niches. However, she’s one of the best sword fliers without one, and does very well with her default weapon. Fiora is relatively cheap to build and highly effective.

Summer Fiora isn’t setting any records, but remains a solid, easy to build unit, and can be used in a “Flier Ball” team composition (A squad of tightly positioned Fliers). She’s by no means the worst sword flier, but can’t complete with the likes of Elincia and Legendary Ryoma.

Like her sword flier brethren, Fiora excels in the realm of Speed. Base 37 is high, and when fully build and buffed, she can reach almost 60 Speed without merges. Speed also helps Fiora out defensively, making her very difficult to get follow-up attacks on.

What makes fliers so dangerous is their mix of strong offensive stats with unparalleled movement. Fiora can soar over rivers and mountains to attack her foes. When teamed up with other fliers, Assist skills such as Swap and Reposition make it even easier for her to engage the enemy.

Torn to shreds by bows.

One weakness that all fliers share is their weakness to bows. Although Fiora can use the Iote’s Shield seal or skill to eliminate this problem, this takes a valuable slot, and worse still, there is only one Iote’s Shield seal available (and it’s better used on a defensive flier like Myrrh).

Fails to stand out compared to her peers.

There’s nothing really wrong with Summer Fiora: She has a decent statline, access to good weapons, and is well-suited to her movement type.  But she fails to stand out compared to offensive units like Elincia and NY Gunnthra, who have better offenses and strong personal weapons. Her statline is also similar to many other sword fliers.

She's built to be an undouble-able enemy phase tank with a speed refine and flier/tactic support. She wants the enemy to be debuffed for her parasol so her S and S skills help with that, as should her allies. Under attack from a debuffed enemy, she'll have 49 speed, doubling the majority of foes and can then sit with Vantage and a charged Bonfire. With speed support, a defense refine would also be good.