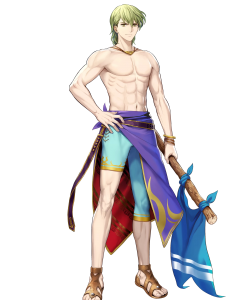 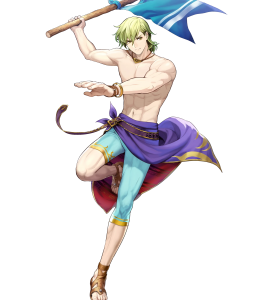 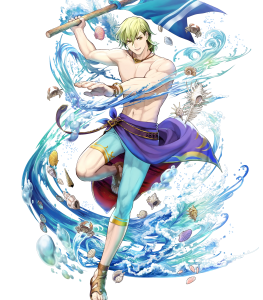 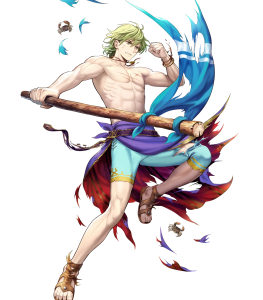 Summer Innes is the fastest green axe flier at the time of his release and also sports a decent Attack and Defense to boot, making him a fantastic duelist. His IVs can be further perfected to make him even better at what he does.

Innes finally gets to prove his superiority to Ephraim with a powerful, Speed-focused build that can initiate with a total of 52 on odd-numbered turns, 58 on even numbered turns. This allows him to easily double even the fastest of lance users, as well as prevent doubles from any sword user who may try to initiate onto him (though be warned, during Enemy Phase, he will only have 43 Speed before Even Speed Wave).

Otherwise, the concept of this build is simple. Innes’ Beach Banner acts as a free Fury 2 on initiation, which also grants him a refine of +3 Speed and +5 HP, allowing him to catapult his Speed to become one of the fastest units in the game.

Since most axe users are quite slow, this allows Innes to carve out a niche for himself in the Player Phase metagame, where he can successfully double his opponent with a decent Moonbow proc until he gets into Desperation range. At that point, he will be able to attack twice before retaliation, which should be all he needs to be able to secure his KO.

Sturdy Blow is an alternative option if you’re worried about his 30 Defense being too fragile on Player Phase, which could be helpful if attacking into armored units or units with high Attack and Defense; however, it takes away from his Speed and could result in him failing to double.

At 47 HP, Innes wouldn’t be the best Panic Ploy user in the game, but it’s a definite option for him, particularly as most units who would utilize team buffs (such as Blade Tome users) are fragile with low HP.

With a Slaying Axe equipped, Innes loses out on some of his Player Phase nuking potential and trades it in for a Special that does more damage. In doing so, it also does him well to trade in some of his Speed for Defense, as this set deals more with brawling in both Player and Enemy phase, for those times when you can’t quite make a clean getaway after initiation.

Innes with a Speed Boon still manages to hit 40 Speed, further increased to 43 with Fury. While it seems odd then to put Axebreaker as his optimal B slot since he easily outspeeds most axe units (with the exception of unique units like Raven), it’s more for insurance against axe-wielding armor units with Fighter skills or Quick Riposte (as Hector, Winter Chrom, and Winter Lissa are all pleased to utilize).

When going against an axe unit with Quick Riposte or a Fighter skill, Innes will guarantee his double and revert the enemy’s double chance into a Speed check- which Innes will generally win. This only fails to work against Hector’s ‘double QR’ build, when Hector runs Quick Riposte in his Seal slot as well- at this point, both units would attack twice. Through this, Innes can disable prominent Arena threats in his own color.

Guard is another attractive option that negates cooldown skills like Heavy Blade and even messes up Enemy Phase units who rely on Quick Riposte to proc Special attacks against him. And finally, Quick Riposte is always an option, despite his high Speed, as it will allow him to double units with Axebreaker (due to his Speed) as well as other Player Phase oriented units.

With a Defense forge on his Slaying Axe, Fury, and Close Def, Innes hits 43 Defense during the Enemy Phase as well, which is generally enough to tank a few hits. When combined with Bonfire, he can charge a big 22 damage Special to add onto his already-formidable Attack, and proc it in the same enemy combat, provided he can double with 43 Speed.

Despite Brave Weapons going a little out of style with the rise of Enemy Phase meta, Innes can still pack a powerful punch, provided he can double. With his Speed fully invested in, he can reach 42 Speed before Even Spd Wave activates, which can give him a total of 48- still enough to reliably quad most opponents, with an Attack value of 45.

Quad attacking an enemy guarantees a Luna proc as well, allowing Innes to rip through his opponent’s Defense. And of course, there’s always the option to reduce his Speed a little in order to help his middling Attack: Innes can flip his boon and Sacred Seal for a total of 42 Speed and 51 Attack.

Innes is back at the beach to rekindle his rivalry with Ephraim and wear weirdly mismatched-length shorts. Though he was an archer in his original appearance, Innes has ditched the bow, bulked up, and apparently found a wyvern, as he is now cruising the skies with his sister.

With a blistering Speed stat of 37, he is the fastest green flier at the time of his release, making him a very attractive unit to fill a green slot in flier emblem. Not only that, but his Attack and Defense are both relatively good, making him a fantastic duelist in his own right- a fact that’s only further emphasized by his seasonal weapon, which essentially grants him +2 to all of his stats during the Player Phase.

Innes has one of the highest Speed stats among green axe users in the game.

This puts him in a relatively uncontested niche, along with units like Raven and arguably Legion.

He can double easily in Player Phase and avoid them in Enemy Phase, increasing both his damage output and his defensive capabilities.

If his natural Speed wasn’t enough, Innes has access to flier buffs, which could serve to increase his Speed to over 50 when combined with A slot and Boon.

His flier typing also allows him fantastic mobility for a Player Phase unit.

He can also support his allies through the use of Guidance.

Innes’ limited rarity means that he’ll be difficult to get many copies of, particularly for F2P.

This makes finding ideal IVs for him difficult as well.

Innes’ statline is screaming for a Firesweep Axe option, yet none exist in the game at the time of his release.

This limits his Player Phase potential, as he always has to be worried about retaliation unless running a Sweep skill.

If you don't already have a highly invested Minerva then I would recommend giving this regal prince a look. This build has s summoner support and +10. He fits very well on a flier team and can support a blade tome user of different color like summer tana. If he gets a fortify boost he becomes a great generalist with fury. Doing well on both phases and aether and renewal provide sustain. Being the hone or fortify flier (budget) supporter, it's important he sticks around. Heavy blade and slaying axe reduce cooldown reduction of aether. The hp from slaying axe refine also patches up his hp bane.

Understanding L!Chrom
@Riahd wrote: So legendary chrom looks interesting and I…
Now that’s a lot of damage
@Cam_the_Man wrote: One initiation. image750×1334 379 KB …
New player, several questions
@renscy wrote: Heyya! I came from FGO, and needless to say…
Distant ward is one hellava drug for Aether Raids
@antsims93 wrote: A friend kind of convinced me to do it. …
Mjölnir quick question!
@dark_fliers wrote: I was wondering if it affects your…
Read More