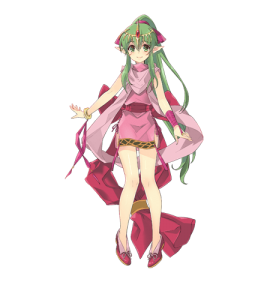 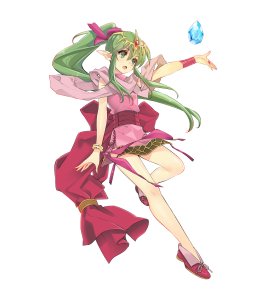 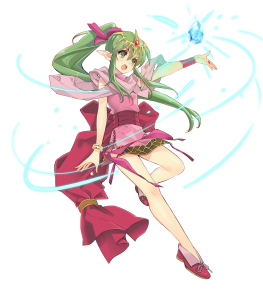 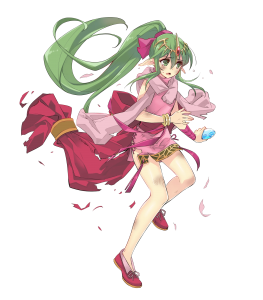 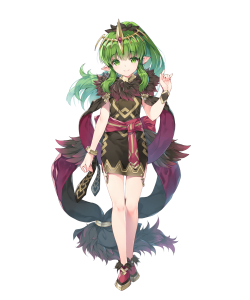 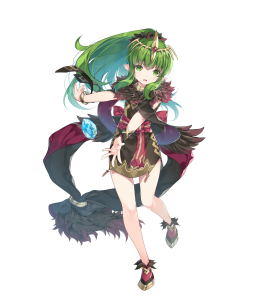 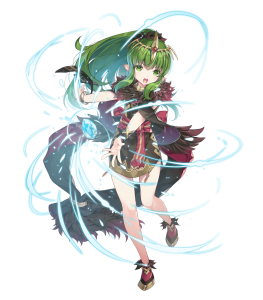 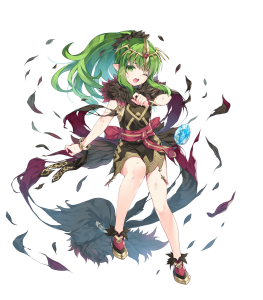 Because Marth’s too weak to kill Medeus. (Distant Counter Defensive)

Being an infantry dragon is in itself quite advantageous, giving Tiki access to a plethora of powerful skills such as Dragon’s Ire, Breath skills, and Null C-Disrupt, in addition to some great inheritable weapons, namely Lightning Breath and Blackfire Breath. Most breath weapons also feature inbuilt adaptive damage against ranged foes, allowing Tiki to target their weaker defensive stats.

Tiki’s status as a dragon may come with many advantages, but it also leaves her extremely susceptible to effective weaponry from the likes of Legendary Marth and especially Legendary Juilia, who can decimate Young Tiki easily.

Unremarkable Compared to other Red Dragons

None of Young Tiki’s stats stand out in any way, aside from her decent 32 base Defense(34 with Resplendent), and her exclusive Breath of Fog is lackluster compared to inheritables such as Blackfire Breath. Although her Resplendent helps her statline out to some extent, Tiki still struggles to stand out compared to other Red Infantry dragons such as Sothis and Nah due to their significantly better exclusive weapons and more optimized statlines. However, Unremarkable in this case does NOT mean bad, and Young Tiki can perform extremely well given enough investment.

Though she's cute, I never found a true use for her... so I build her to be somewhat tanky, at least get a use out of her here and there in the multi-map challenges.
She now has Breath of Fog making her an anti-dragon-dragon, with a Renewal effect, so that's good. Swap because it's something that can be of use, Moonbow for quick extra damage.
AB3 because it's already there and it's a bit of extra tanky, which I broadened out by adding Seal and Atk Smoke.

Generalist set turned anti-Falchion (or intended to) due to Swordbreaker. Combined Dragon Bond, Atk/Def Bond, Fortify Dragons, and 1 Drive Def could Tiki survive +10 +Atk horse Chrom, but that is inconsistent with buffs and chills from enemy. Until build can handle Falchions (barring Alm probably), Res boon helps with anti dragon role herself, though +Spd/-HP is preferred even there.

+8 and summoner supported. Base build I use for her in Arena. This build gives her great survivability with high defensive stats, great offensive presence, and a way to combat the numerous Dragon Emblem teams that plague the higher tiers.

I could write a book about how versatile Tiki is, she's definitely my favourite unit because of that. She can run so many skills that it really is difficult to give just one build. However, she fulfils the role of a mixed tank or bulky fighter best.
This is the generalist build I tend to run on her.

Firstly, her weapon. The three most viable breaths (in my opinion) are Lightning Breath, Water Breath and her personal Breath of Fog. Lightning breath is a staple, Water breath allows her to maximise her mixed bulk, while breath of fog's passive healing offers her great lasting power. I personally never use Breath of Fog (+eff), but that's just because I feel it limits her to teams that support it, which is a shame for such a versatile unit. Therefore I'd refine all of these with either DEF or RES, with the opposite stat in her seal slot; boosting her already strong mixed defenses.

For special anything is fine really, however 2/3 charge specials work best on her. Her speed isn't great, so she'll struggle to double (but will occasionally prevent doubles). This means she can charge 2/3 specials quite during either phase and retaliate with it during the next phase. I choose to run iceberg normally since skills that reduce RES are less common than skills that reduce DEF.

Tiki's A skill is what will define the build you're going for. For a mixed tank Brazen DEF/RES 3 is a great choice, although, if running Water Breath then you can consider Bracing Stance 3 to total up to +8DEF/RES during enemy phase. Fury 3 can be a good choice in some situations or as a budget choice, as her stats are quite well rounded already. For something a little odd you can go for Wind Boost 3; boosting Tiki's speed to the high 30s/low 40s, which can be enough to turn her into a speedy mixed tank. The breath equipped will be the most influential factor to what A skill you run, so consider the combination there. Lightning breath works well with Brazen DEF/RES, Water Breath with Bracing Stance, and Breath of Fog with... well, all of them really, but Wind Boost most so.

As far as B skills go, you've got two optimal choices. Guard 3 or DEF/RES link 3. Both are good for fairly obvious reasons; however, it should be considered that DEF/RES link doesn't have to be on Tiki for her to reap the benefits. Consider equipping Guard, and supporting with a L!Lucina, or Odin with DEF/RES link 3.
Although I haven't tried it, Special Spiral could work very well on Tiki. She will often survive long enough to get off a special thanks to her bulk. If you've got the resources to throw around it could be worth looking into; although I can't be sure if it would outshine guard.

The C slot is much more open for Tiki than most other units, and largely depends on what kind of team you'll be running her on. Smoke skills fit well, especially ATK smoke and her RES is high enough to reliably proc ploy skills. Failing that she can still run any spur/drive skills, Infantry pulse/rush/flash, or dragon buffs.

Tiki's seal is pretty much set in stone, at least as far as making her a mixed tank goes. In short, I just give her DEF +3 (as I refine her weapons for RES+4) to boost and balance her defenses. Other skills that may be good for her seal slot are Close/Distant defense, Deflect skills, QR. However, I feel most of these seals are better off on other units. There isn't much competition for the DEF +3 seal, so you can comfortably leave it on Tiki forever.

Turns out I wrote a book anyway.
-fin

Although the IV's may not seem good, it is actually really fun.

Fury allows for her to get all her stats boosted and deal extra damage.

Breath of Life allows her to heal up her other teammates. 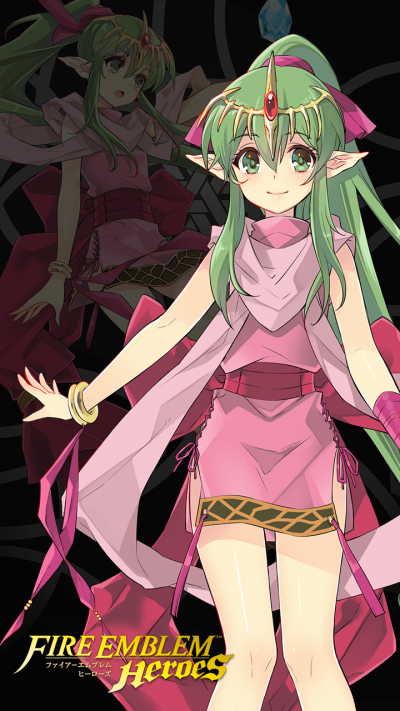