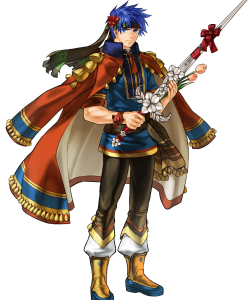 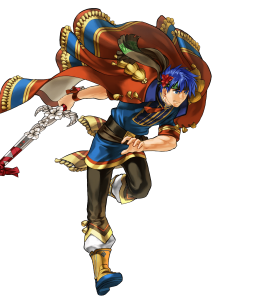 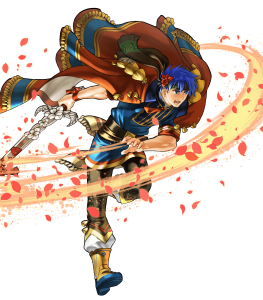 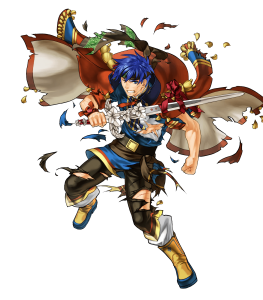 This build is almost entirely just Valentine’s Ike’s base kit, which just goes to show how powerful it is. Having access to Radiant Aether and Special Fighter means that Valentine’s Ike has no need for a Slaying Edge, and can opt to use his base Heart’s Blade. Wo Dao offers slightly more damage, but the net effect of Heart’s Blade is that Valentine’s Ike deals an extra 6 damage over two attacks in addition to the rest of the bonus stats compared to simply dealing an extra 10 damage with a Special with Wo Dao. However, this does require that he stay adjacent to an ally, so Wo Dao does offer a bit more flexibility in that regard.

The combination of Distant Counter and Special Fighter gives Valentine’s Ike full flexibility in dealing with both melee and ranged threats; he can counterattack at any range, shut down enemy Specials, and accelerate his own Special charge all at once. Because Special Fighter works on both phases, Valentine’s Ike can even initiate combat on Player Phase (thanks in part to his fantastic Speed). Armor March is recommended to help facilitate this (as well as support other armor allies), but isn’t strictly necessary; his base Even Spd Wave or any other skill to suit the team can work.

The Atk/Spd Bond Seal synergizes fantastically with Heart’s Blade since both will activate when Valentine’s Ike is standing adjacent to an ally. It works best with a +SPD asset though; otherwise, Quick Riposte may be a better option to ensure that Valentine’s Ike can double even the fastest enemies as well as those who would otherwise prevent doubles with skills like Wary Fighter or Sturdy Impact. If neither of those Seals is available, then Darting Stance can also work.

This is a standard mixed phase setup for armor units. Valentine’s Ike has more than enough Speed that he can easily double most opponents without the need for skills like Bold Fighter and Quick Riposte (in fact, this is what makes his base kit so good). However, one strong perk of these skills is that it gives him a way of breaking through enemies with skills that otherwise prevent doubles such as Wary Fighter (Surtr comes to mind with his base kit).

A Slaying Edge will reduce Radiant Aether’s cooldown to 3, allowing Valentine’s Ike to activate it on either phase; note that he will not be able to activate it on Enemy Phase unless he gets doubled, which is fairly unlikely with his high base Speed (and even more unlikely if adding a +SPD asset or +Spd refine on his weapon). However, it can be worthwhile to prevent the double as Valentine Ike’s defenses aren’t quite at insane levels; this results not only in less incoming damage, but also allows him to have Radiant Aether prepared for immediate activation in his next combat allowing for maximum healing and sustain.

Armor March is fairly important for this build as otherwise, it’ll be pretty difficult for Valentine’s Ike to engage on Player Phase due to his poor mobility. It’s not strictly necessary, however (particularly if an ally is running it), and can be replaced by his base Even Spd Wave or any other skill to suit the team.

Ike finally got a seasonal version, and he does not disappoint: featuring an incredible base kit that synergizes with his outstanding statline, Valentine’s Ike is an extremely potent unit. He even has access to Radiant Aether, something that used to be unique to his Legendary version. While he lacks access to Ragnell and therefore can’t pull off all the same builds that his Legendary version can, he does have access to unique armor skills like Special Fighter and Bold Fighter that can allow him to be quite a fearsome threat.

With 37/38 Attack/Speed, Valentine’s Ike has easily one of the best offensive statlines in the game. This also makes him a fantastic candidate for Special Fighter, which he was kind enough to have in his base kit. As a result, Valentine’s Ike is quite tanky due to the combination of his decent bulk, ability to shut down enemy Specials, and accelerating his own Special. Radiant Aether also offers fantastic sustain due to the reduced cooldown making it easy for Valentine’s Ike to activate it repeatedly.

While Valentine’s Ike does have a couple of weak points, namely his lack of unique weapon (where’s Ragnell?), poor Resistance, and weakness to anti-armor weapons, he is still a fantastic unit that will greatly benefit any team he’s on.

Taking a cue from his legendary incarnation, Valentine’s Ike also has access to Radiant Aether. Its reduced cooldown allows him to easily activate his Special every combat without having to rely on being doubled as well as not forcing him to use a Slaying Edge (thanks to Special Fighter). Combining this with his fantastic offensive stats allows Valentine’s Ike to simultaneously output strong damage while maintaining excellent sustain.

With 37/38 Attack/Speed, Valentine’s Ike has easily one of the best offensive statlines in the game, which is a far cry from his previous incarnations. This allows him to make excellent use of his base Special Fighter skill since he doesn’t need skills like Bold Fighter to secure doubles.

Valentine’s Ike is deceptively bulky - while 80 physical and 64 magical bulk (before applying any skills or asset/flaw) is already pretty impressive, the majority of his tankiness actually comes from his ability to sustain with Radiant Aether.

One of the major issues that most players face when trying to build armor units is the incredibly high investment cost they require for an optimal setup; Valentine’s Ike is courteous enough to arrive fully kitted out with an incredible setup and needs only basic additions to be fully operational.

As an armor unit, Valentine’s Ike enjoys access to armor-exclusive skills like Special Fighter and Bold Fighter, armor buffs, and a boosted BST.

While Valentine’s Ike has enough magical bulk that he typically won’t get KO’d in a single hit from most non-blue mages (outside of buffed blade tome wielders), he still has very poor matchups against them. This also extends to other units that can deal magical damage such as dragons.

As an armor unit, Valentine’s Ike has a natural weakness against anti-armor weapons. He could run Svalinn Shield to eliminate this, but this would be pretty detrimental to his overall performance.

This build raise V.Ike res to 36 vs range mage in enemy phase and with some support to get +6 in res (most common L.Azura or Fortify armor user)he will reach amazing 42 res and be able to survive most of his counter(when I test it in aetheraid test defense with equal fortress,V.Ike with fortify armor buff(no ward) survive reinharth and kill him in 1 Radiant aether counter,survive Micaiah and kill her in double counter attack,most range fire sweep user(include b.lyn)fail to damage him) His weakness that I found so far is strong blue armor can duel him and win

I hate DC builds that don't try to be well-rounded, so I went with a +Res boon and weapon refine to get it back up. Because he is a natural on enemy phase it made sense that he'd chill next to his allies and benefit from the Heart's Blade bonus, which means his speed is covered as well (not to mention furthering all defenses). His insanely high HP makes him a fantastic user of Panic Ploy, since buffs are everywhere, and thus the HP/Res seal was actually a natural fit.

Between his salvaged resistance, his enormous health pool, his self-healing through Radiant Aether, and his debuffing of foes this guy is a veritable bulwark that chews up almost anything that approaches him.

I also currently have him at merge +3, set as my Summoner Ally, and put 3 Dragonflowers on him to get him to his stat spread of 62HP|55Atk|42Speed|38Def|31Res.

Valentine's Ike is undoubtedly among the strongest red armor units due to his powercreeped Aether (Radiant Aether), glaringly high speeds for an armored unit, and astounding base kit. This build focuses on maximizing the potential of V!Ike's special.

The IVs should be +Res/-HP. A bulkier Ike will be able to heal back the damage taken much easily. This build strays away from +Atk (a common IV) because a more powerful first attack will lessen the healing potential of Radiant Aether.

Wo Dao+ (+Res) is the weapon of choice, due to its magnification of Radiant Aether's damage and, therefore, healing power.

Fort Def/Res, although rare and also without DC, is valuable to use here due because V!Ike is in desperate need of tankier stats to pair with his healing special. The attack penalty, compared to standard Fortress skills, is quite small (and may actually help with lowering the damage of the first attack, thereby increasing the healing potential of the special).

Special Fighter, which is part of V!Ike's base kit, is vital to his performance as a tank. Faster special charge on both phases means that he can heal up more often.

The C slot is quite flexible. If V!Ike has armored allies, Armor March could be useful. However, if there is a lack of support, Even Spd Wave will not disappoint.

The S slot is mildly flexible. Armored Boots may be preferred above most other choices due to its synergy with healing specials such as Radiant Aether.

While Heart’s Blade is a good general option, to patch up Ike’s poor Res he can take up the Barrier Blade and have a Distant Defense seal to boost his Res by +17 for a total of 36 Res during EP.