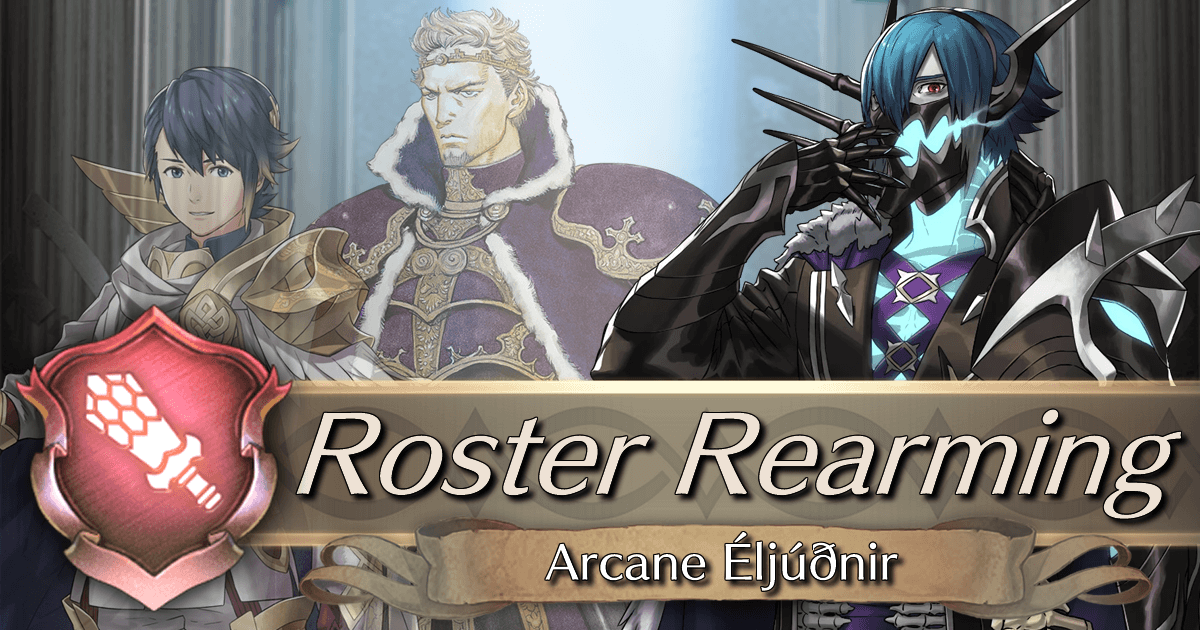 What Are Arcane Weapons?

With the introduction of Rearmed Heroes in September 2022, Fire Emblem Heroes finally throws a bone to older, more powercrept units in the form of Arcane Weapons.

Arcane weapons are essentially modern, inheritable prf weapons possessed by Rearmed Heroes, such as Rearmed Líf. You can inherit these prf weapons to other units of the same weapon type once, without losing the original hero - meaning that even after inheriting Arcane Éljúðnir, you can still use Rearmed Líf in combat.

This allows summoners to drastically increase the power level of older units, particularly those with poorly-aged refines, such as Selena, Draug, or Tobin.

Arcane weapons can also be stat refined for additional stats after inheritance - the examples in this article show non-refined Arcane Éljúðnir due to constraints in the unit builder.

Keep in mind that the units and builds displayed in this article are indicative of an archetype showcase, rather than a full endorsement for that specific unit. Additionally, the best character to give a new weapon to is always your favorite! This article serves to make suggestions based on what might be best in the current metagame.

Arcane Éljúðnir is a powerful weapon with the following effects:

Looking more closely at these effects, we can see that users of this weapon will still be vulnerable to Null Follow-Up and Tempo skills, which disables crucial parts of the weapon. This weapon also doesn’t give any Speed, so Speed stacking units may have a difficult time using it in conjunction with skills like Spurn or Vital Astra. Finally, there is no Damage Reduction in this weapon, which means that tanks will have to get DR some other way.

Still, it’s an incredible weapon and naturally suited for units with high Attack and bulk, with middling Speed stats. Thanks to the follow-up denial and Guard, it can be used on bulky units, particularly Save armors. Additionally, with the cooldown and guaranteed follow-up effect, it’s also beneficial for units running a Galeforce build.

Notably, this sword is a godsend for Save units who can use its Slaying effect in conjunction with Hardy Fighter and a 3 CD Defensive Special to negate the first hit in combat by 75% + 5. Then, the unit gets an auto-followup, Guard, disables foe follow-ups, and inflicts -6 Atk/Def on top of it all.

The only thing to note here is that by sacrificing an offensive Special, you may want to invest in an Atk-boosting A slot to give your unit better ability to KO. 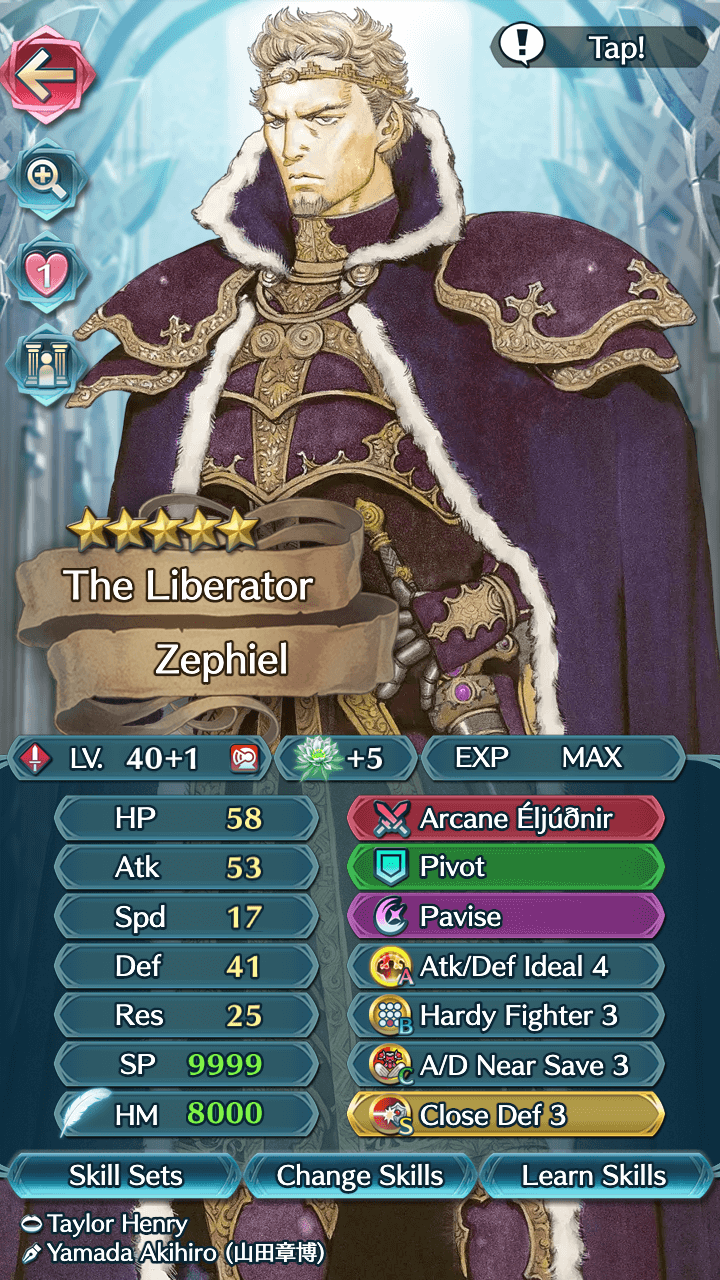 However, armors aren’t the only ones who can use this weapon well - bulky infantry units can equip it with skills like Bulwark to give themselves some healing after combat while also walling opponents from reaching their squishier supports. 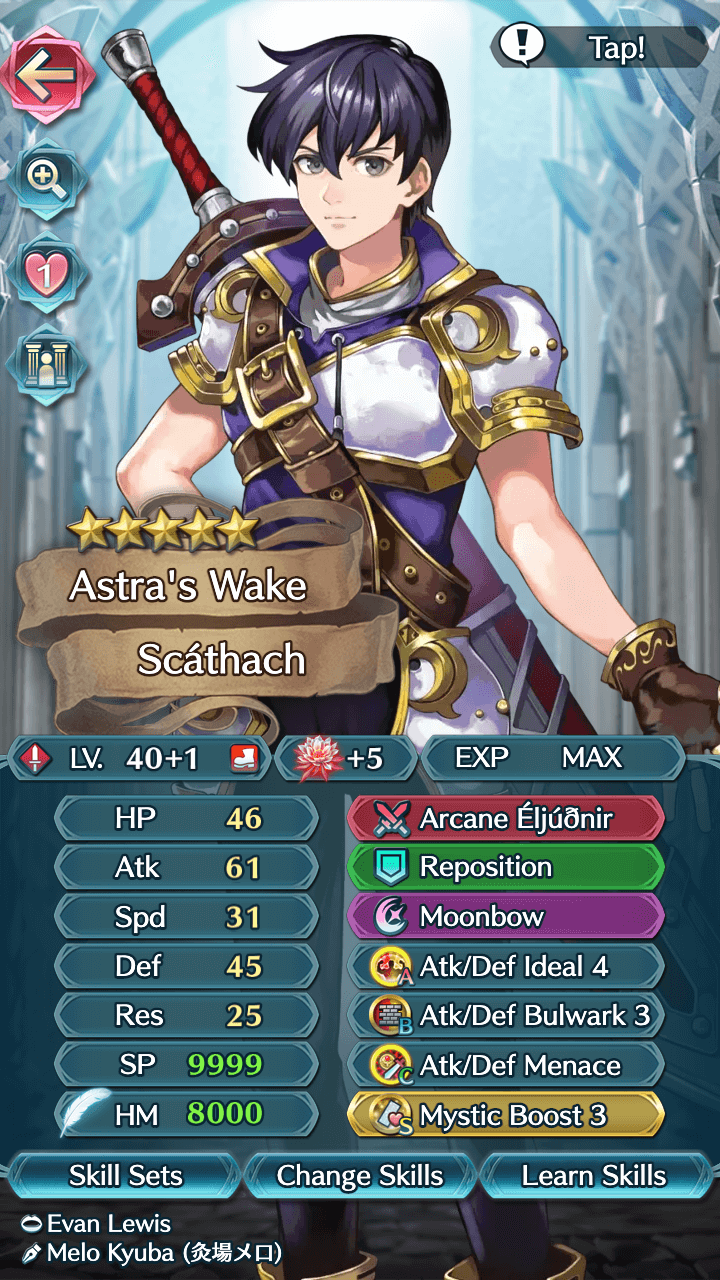 Seal slot is flexible - you could run a Res Solo instead to build Resistance for fighting dragon foes.

Due to the Guaranteed Follow-Up and Slaying effect, Galeforce units (particularly slower units with high Attack) are also able to equip this with Special Acceleration skills in order to have an easier time activating Galeforce. This can make them either the Galeforce initiator on your team, or a good Wings of Mercy support. 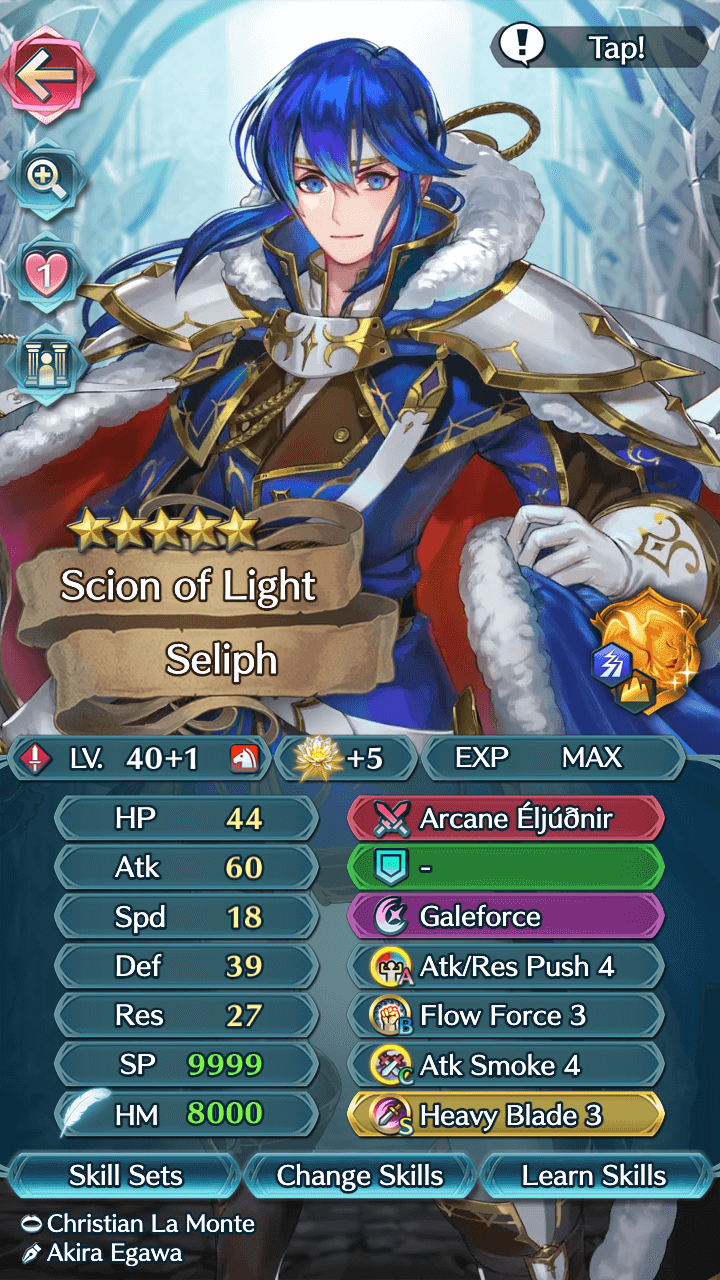 Legendary Seliph happily drops his lackluster prf and B skill for a fearsome Galeforce build. A slot is flexible, but building his Resistance helps against Dragon foes like Medeus and Seiros. 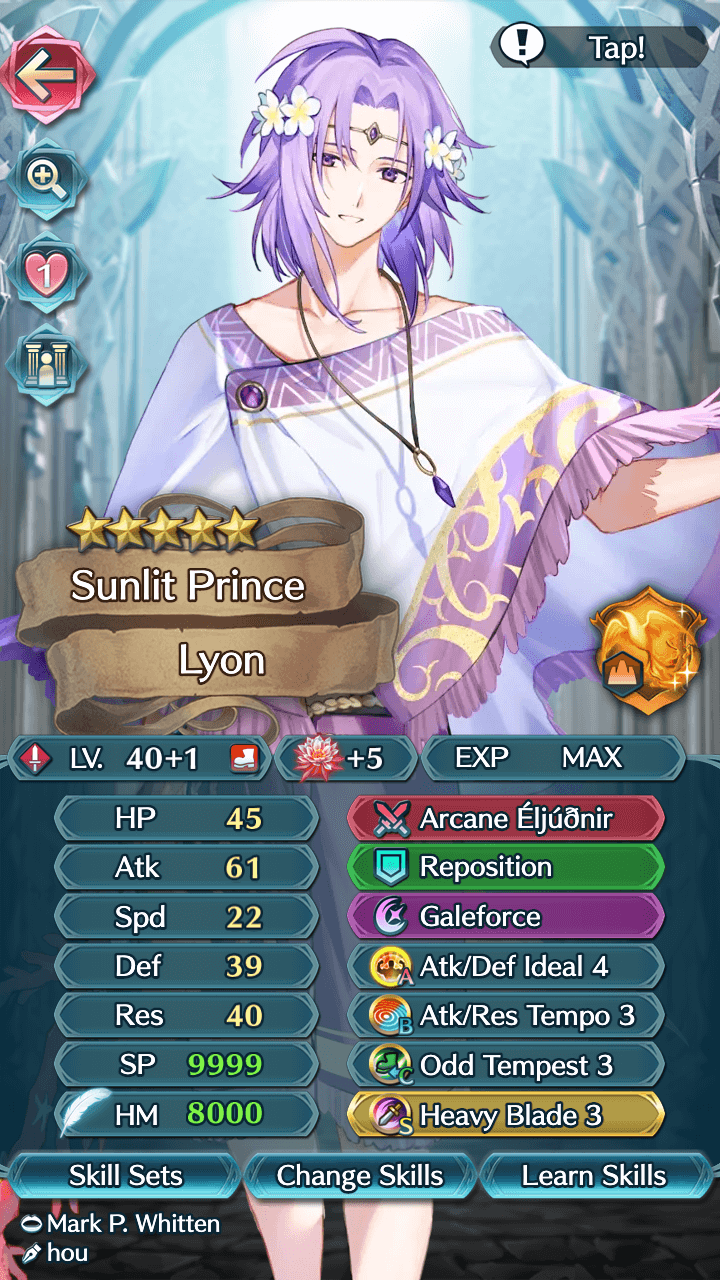 At the time of writing this article, Atk/Res Tempo is the only Atk-based Tempo skill, which is useful for making Heavy Blade checks. C Slot is flexible and can be used on a Smoke or Menace skill.

He’s a consistent bonus unit and now he might not be quite as much of a deadweight! With a statline that actually works with this weapon, Alfonse can start pulling his weight a bit more when he’s a bonus unit in game modes like Arena and Aether Raids. 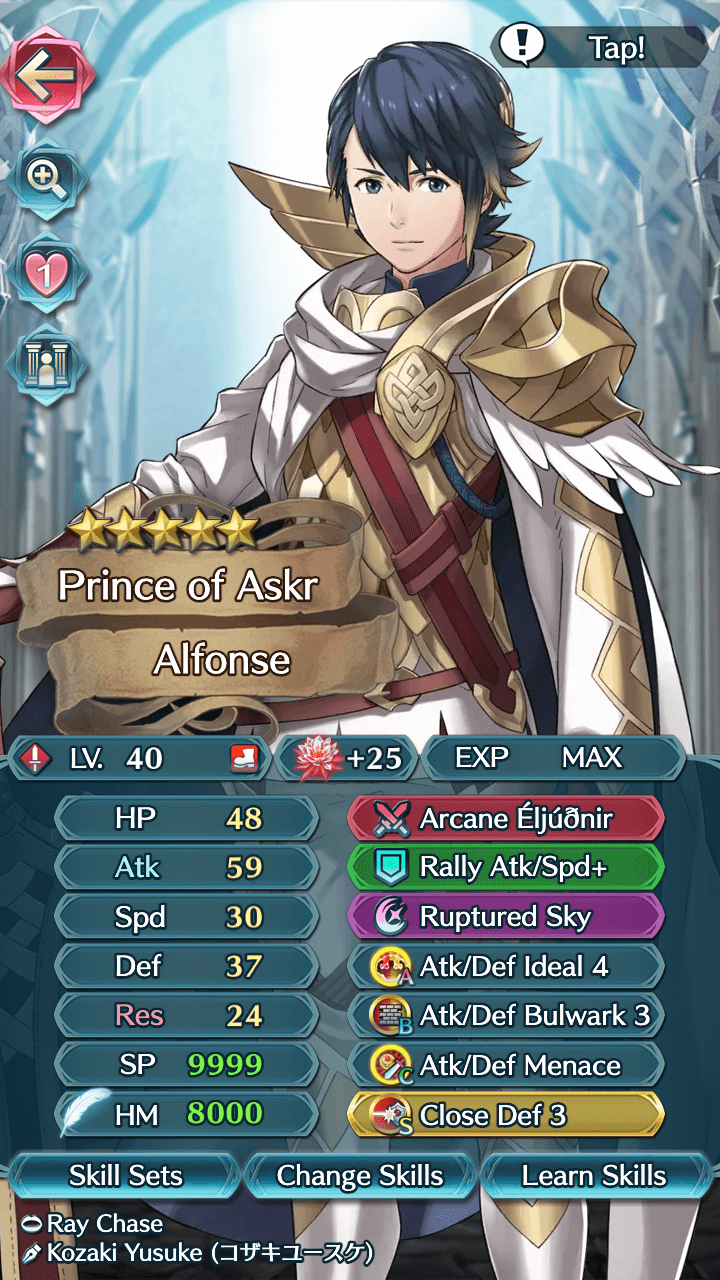 A well-invested Alfonse who can hold his own