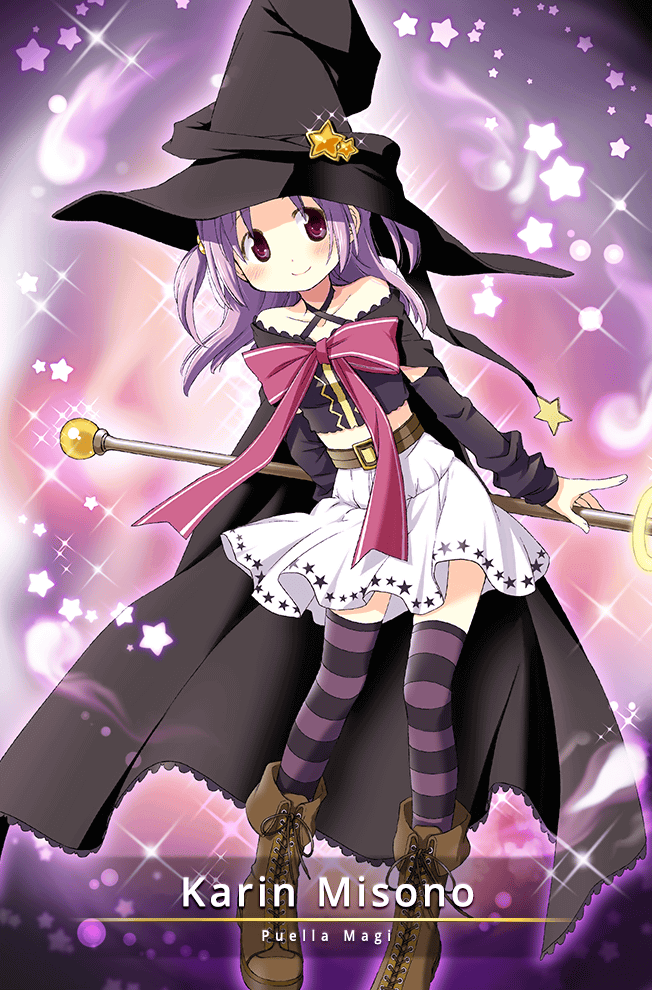 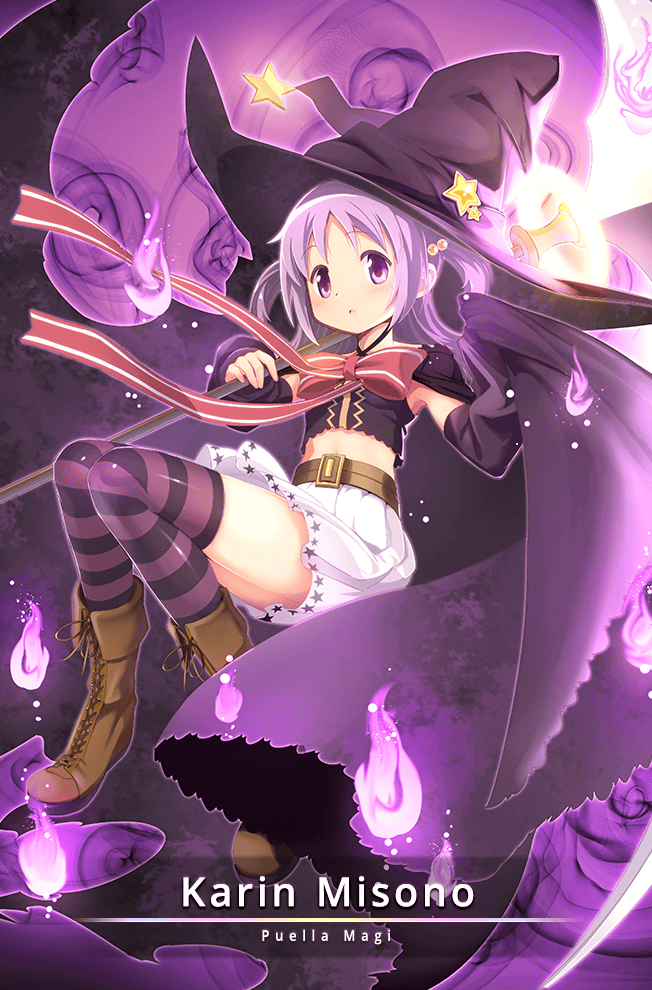 The "Magical Girl born of Halloween". Or that's what she says at least... Karin loves reading and drawing manga so much that she's event created her own Magical Girl persona. She's heavily influenced by her favorite manga, Phantom Thief Magical Kirin. 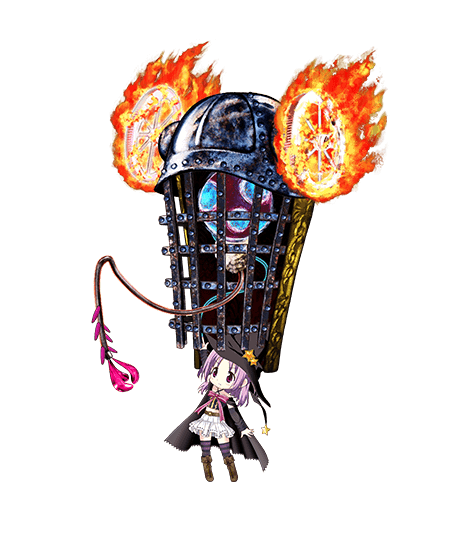 Damage Target
Doppel: Deals 1760% damage to the target.
Defense Down Target
Reduces target Defense by 60% (3 turns).
Accele UP ALL
Buffs all allies Accel MP Gain by 42.5% (3 turns).
Damage Inflicted UP ALL
Buffs all allies Damage by 47.5% (3 turns).
Draft & Supervision: Idea/Supervision: Gekidan InuCurry (Doroinu)
Doppel Detail (May Contain Spoiler)
The master of this Doppel is cowardly by nature, which is why she gave birth to this stubborn Doppel. It fears losing anything and is fixated on obtaining more. It shares it's proclivity for thievery with its master, and will pilfer anything it can get its hands on, even if those items belong to an ally. This Doppel is extremely greedy and refuses to give up on anything once it has it in its possession. 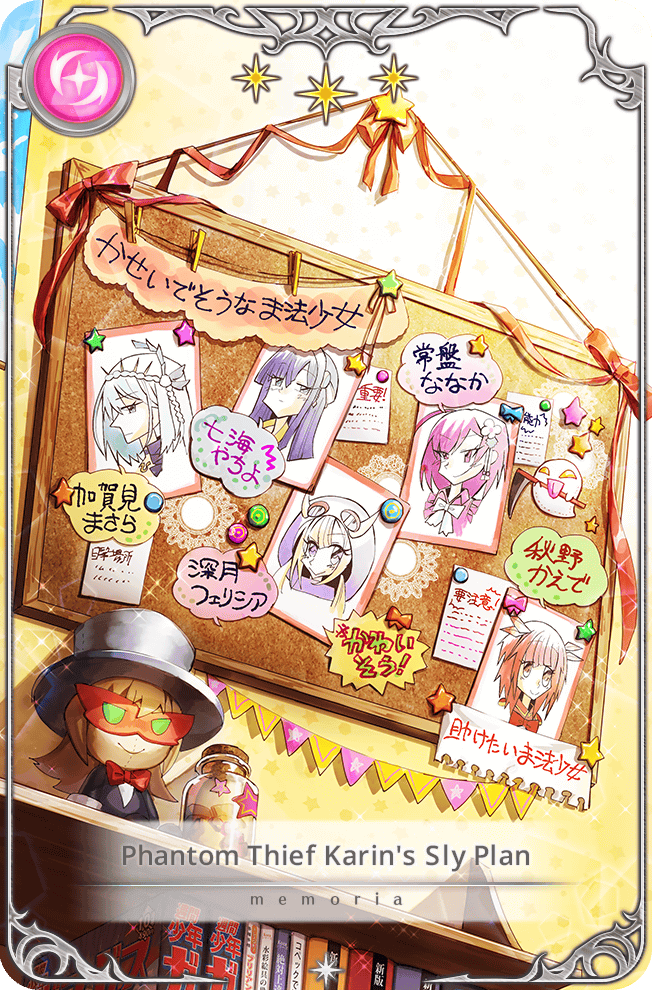 Karin's Connect is useful in many situations, providing an always-appreciated boost to Attack, while also giving a 100% chance to Bewitch the target. This can further boost the damage inflicted on the enemy if you have an elemental advantage, while also giving that enemy a 50% chance to miss you and waste their turn.

The Magia Seal part of her Connect is rarely applicable and has too low of a chance of procuring to be relied on, but it may find some use in challenge battles against opponents who like to spam their Magia.

Karin's Magia provides a wide array of bonuses to her team that can pave the way for their success on a Magia-focused team. In providing a 3 turn Accele UP to her allies, she allows them to procure their Magia much faster, and in providing a 3 turn Damage Inflicted UP to her allies and a 3 turn Defense Down to the enemy, she can significantly boost the damage of any Magia that follows soon after hers. Being an Accele gorilla, Karin should have no problem getting her Magia ready early and opening the way for the rest of her team.

Accele gorillas rely heavily on their Magia to be a reliable source of damage, so Karin's Magia only being able to damage a single enemy really handicaps her potential. The greater damage compared to multi-target Magias means that it can be preferable when facing a single-tile boss, but the majority of the time, you'll really be wishing that Karin's Magia could clear the screen of enemies.

Dazzle is one of the best negative statuses available in Mirrors, as it can cripple the enemy team and essentially skip turns, without needing to worry about Puella Combos from an enemy girl if you fail to stun her. That Karin's Connect can inflict it with a 100% chance, alongside granting Attack UP,  is incredible.

Accele units are very difficult to slot into a Mirrors team, as matches are usually over far too quickly for them to use their Magia. Even if you wanted to build a team especially focused around Accele and Magia, a girl with a Magia that can damage the entire enemy team - instead of just significantly overkilling a single enemy - is generally preferred. Even in the Accele gorilla niche, Karin is mediocre.

Karin's Flame element and the abundance of Aqua types in Mirrors definitely don't do her any favors - especially not with her middling Defense stat. She has to actually survive for a couple turns to have a chance at using her Magia, and being Flame just makes it that much harder for her.

Someone who likes hated people

Karin's role couldn't be more clear: get her Magia off as quickly as possible, to boost the rest of her team's Magias and help them get theirs out quickly too. Naturally, you want to equip her with as many MP-boosting Memoria as possible.

On a team of Magia-focused girls (especially other Accele gorillas), if you manage to fire off Karin's Magia, you're already halfway to victory! 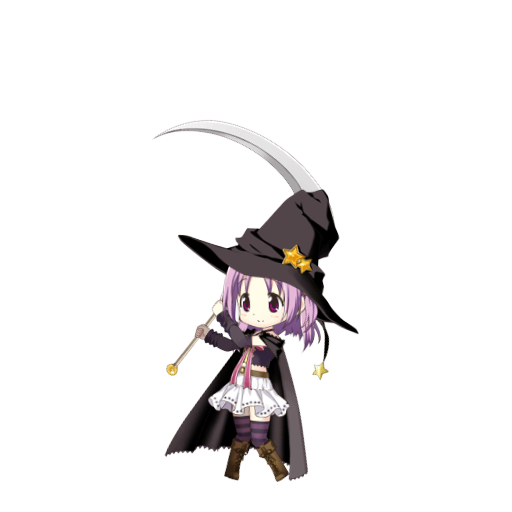 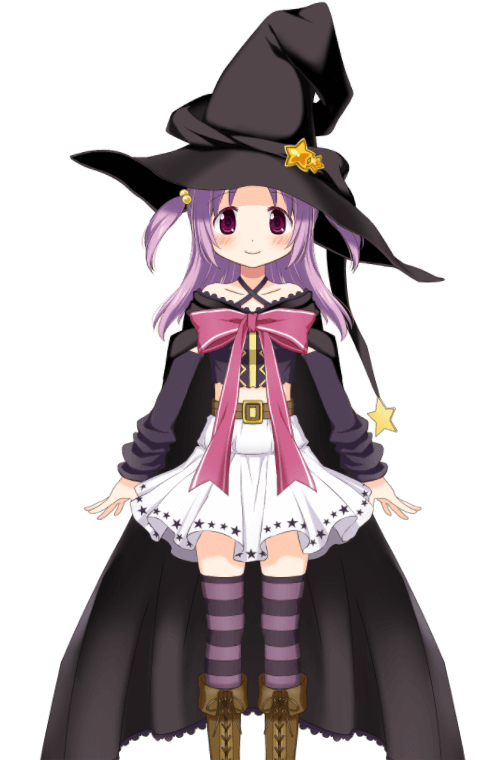 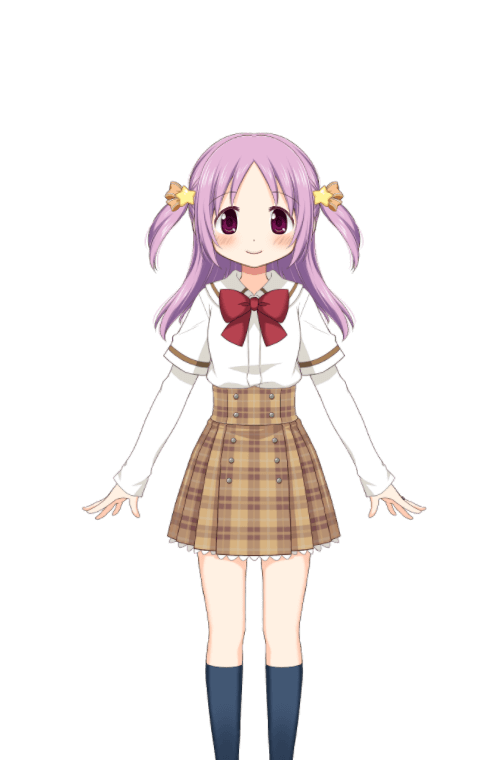 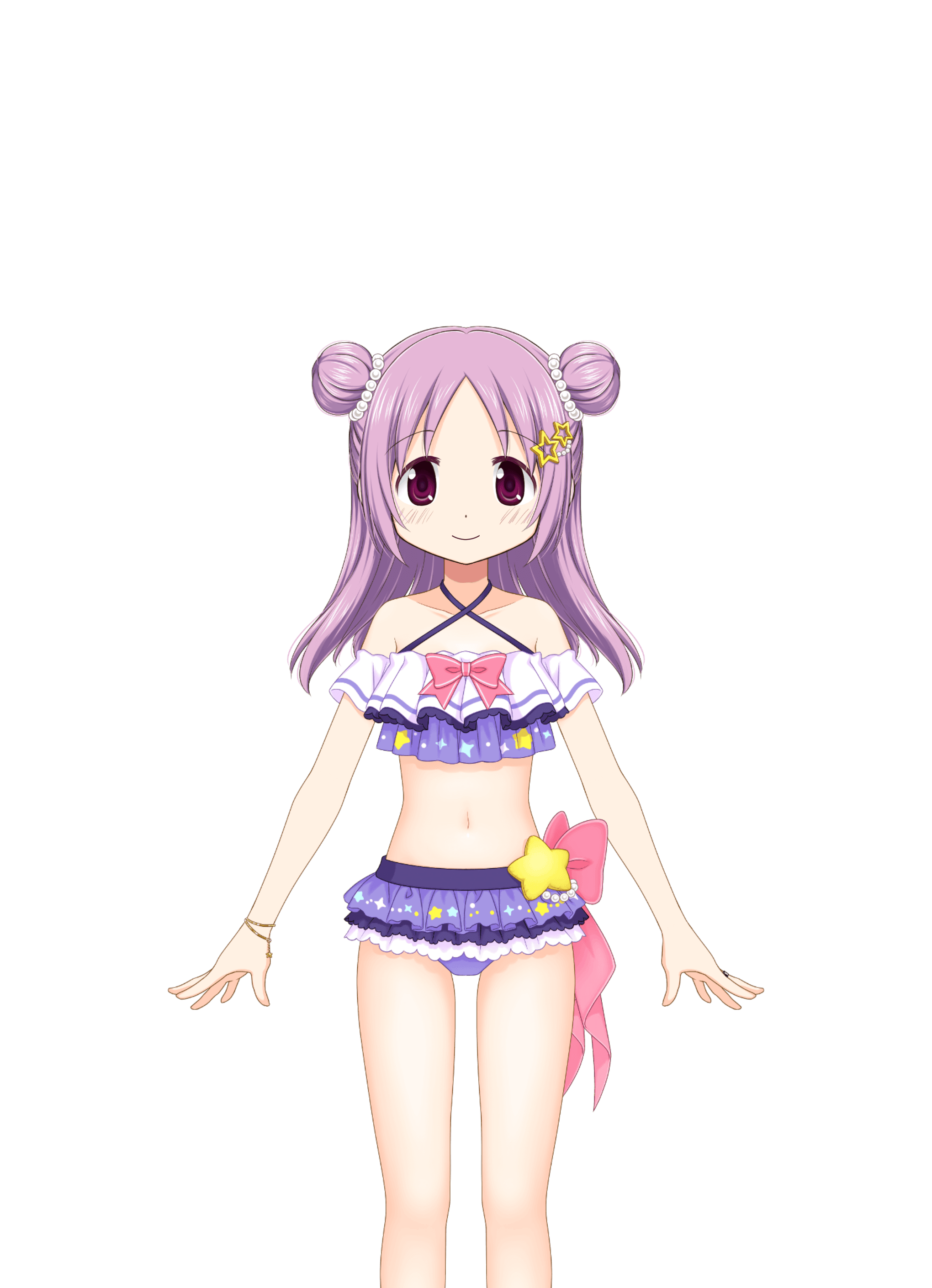 Just as Yachiyo finished off a witch, she hears someone call out “Trick or Treat!” as Karin attacks her from behind. Yachiyo fends off the attack but Karin has already stolen her grief seeds. Elsewhere, Kaede’s soul gem is getting dark but she’s too embarrassed to ask Momoko Togame for help since she believes Rena Minami will scold her. Just as she’s about to search for a witch, she hears someone yell “Trick or Treat!” and turns to find Karin standing there. She hands the “incompetent magical girl” the grief seed and narrates her departure, like the end of a TV show.

Yachiyo eventually catches up to Karin and demands the grief seed back, but Karin has already given it away. She only let her steal the seed to see what she’d do with it. She explains that even strong magical girls may run out of energy at a critical time and it would be better for Karin to hunt her own witches instead.

At school, Alina tells Karin her manga needs work as she steals her strawberry milk. Although Alina thinks the art is trash, she still likes the protagonist and encourages Karin to continue to work on her manga. Karin thought she was like the hero in her favorite manga by helping out others in need, but now she’s not so sure she’s doing it right. That night Karin hunts down a witch but fails and runs away at the end. She considers stealing a grief seed to restore her magic, but realizes she can’t do that. Kaede, Momoko and Rena appear and Kaede returns the grief seed that Karin had given her. The girls all introduce themselves and team up to fight off the witch.

The next day at school, Alina thinks Karin’s manga has taken a turn for the worse and asks if Karin is really satisfied with the story. Alina knows that Karin is really drawing/writing about herself and that she needs to be more true to herself. Karin wants to be strong enough to rely on herself rather than on others. Karin is able to track down the witch she couldn’t beat from before, but is knocked unconscious and defeated. Kaede appears to help but she can’t fight off the witch alone. As the witch goes after Kaede, Karin picks up some rocks and throws them at the witch. The witch is injured and Karin realizes she imbued the rocks with her magic. Karin and Kaede pick up whatever they can and wrap it up in Karin’s cape. As Karin flies over the witch and drops the rocks, the witch is destroyed.

The next day, Karin shows off her latest manuscript to Alina. Alina leaves, and comes back with a fresh strawberry milk for Karin, saying Karin has earned it by no longer lying to herself. Karin asks about the art but Alina only goes back to work on her own painting and mutters something about the art being garbage.

Read more of Karin’s story at the Puella Magi Wiki.