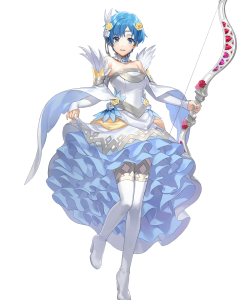 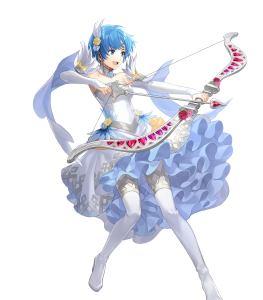 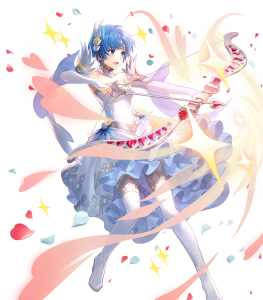 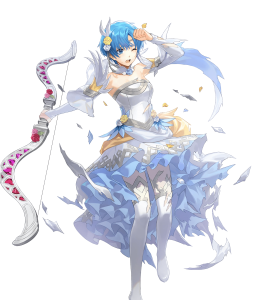 Dressed and Wide for Murder, Chief!

Bridal Shanna is ready to continue the legendary bloodstained legacy that Bridal Cordelia left behind with an undeniably fine dress and offensive stats of 38 Attack and 42 Speed. Thus, consistent follow-ups, great damage, and a totally happy-go-lucky visage waiting at home should be expected of her in most scenarios as long as you exercise proper matchmaking. (Yes, the competitive kind.)

Shanna shows off her flying strengths yet again with mobility being mostly a non-concern with her. Her status as a bow user only accentuates this as Shanna has the ability to snipe enemies from a distance in many types of inconvenient terrain.

Her access to Trace and Rein skills serve some really nice icing on this wedding cake too, as she gains better stat swings through both and, for the former, even move away after combat. She already comes with the Atk/Def variety of both, which gladly cuts inheritance costs while optimizing her damage and improving her bulk for both new and veteran players alike.

Rose-Quartz Bow shouldn't be taken lightly despite its simpler constitution (that is, number of effects) compared to other modernly-released weapons. On top of an always-handy flat +3 Atk, by simply initiating combat — which is pretty much the natural state of order with strong Player Phase units like Shanna — or being near an ally, it grants a beefy additional +6 Atk/Spd as well as dealing guaranteed true damage based on her very intimidating Speed. Even higher-invesment defensive units should steel themselves for the sheer single shot power of this bow.

For those wishing for a more tried-and-true take on bow sweeping, Brave Bow, of course, is always an option that provides powerful double shots, resulting in generally improved initiation safety. Rose-Quartz Bow's single shots are powerful and result in better win ratios, but leave Shanna arguably open to counterattacking if the first shot doesn't do the enemy in.

Like most archers that came before her, Shanna's not exactly dressed for tanking due to her only-okay defensive stat spread of 37 / 23 / 27.  While her default base skills Atk/Def Rein and A/D Far Trace allow her to avoid one-round KOes more often than not, it's pretty clear that trying to outright defend is not a great idea with her.

While Shanna enjoys an increased advantage versus green enemies with her red coloring, she trades that off for a not-at-all welcome damage disadvantage versus blue units. This can sometimes bite in tight situations where she is unable to squeeze in some extra damage against them.