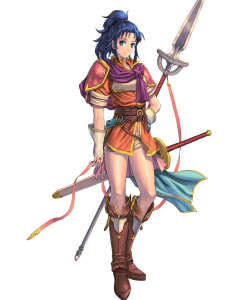 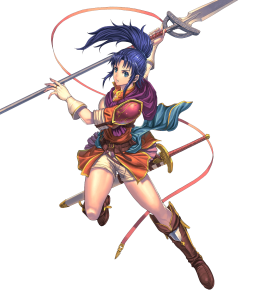 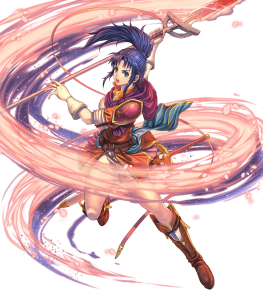 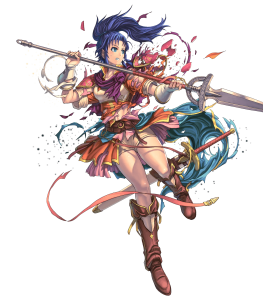 Leader of the 7th Platoon (Supertank)

Female Kris boasts an amazing offensive statline of 37 Attack and 40 Speed, allowing her to dish out high amounts of damage and consistently perform/avoid follow-up attacks.

Kris wields the Spear of Shadow, an excellent personal weapon that grants -1 Special cooldown and, if the enemy initiates combat or the enemy’s HP = 100%, inflicts -5 Atk/Spd/Def to the enemy in addition to neutralizing Kris' visible debuffs during combat. The Slaying effect allows Kris to activate her Specials more consistently, the debuffs during combat grant her extra damage and survivability, and the debuff neutralization makes her much tougher overall.

On paper, Kris has a decent 69 physical bulk. In combination with Spear of Shadow’s -5 Atk/Spd/Def infliction on the enemy if either of its conditions are met, Kris’ physical bulk rises to 74, along with making it more difficult to perform a follow-up attack against her. In addition, thanks to Kris’ amazing 40 Speed, she can make great use of damage-reduction skills such as her native Spurn, which grants 4% damage reduction for every point of Speed she has over the enemy (up to 40%, or a gap of 10 Speed).

Speedy Infantry Lance units are sparse in Heroes, allowing Kris to easily stand out amongst her peers. Her most direct competition is Apotheosis Anna, but Kris’ Spear of Shadow is much stronger and improves her bulk, along with granting -1 Special cooldown. As such, Kris is the premier choice for a combat-oriented Lance unit.

While Spear of Shadow is an excellent weapon, its conditions of the enemy initiating combat or the enemy being at 100% HP can be a bit awkward to work with on Player Phase. The conditions make it much more difficult for Kris and her allies to use skills that deal out-of-combat damage such as Savage Blow, AoE Specials, and Pain.

Kris’ offenses and decent physical bulk come at the price of her Resistance, clocking at a middling 25 for a mediocre 64 magical bulk. However, Spear of Shadow and damage-reduction skills such as Spurn help patch this up, although she may still struggle to take several hits against high-attack mages (especially Green mages, of course).