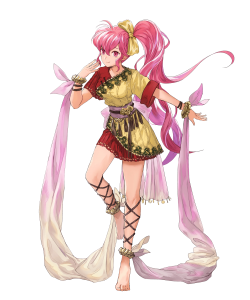 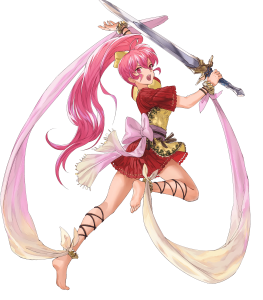 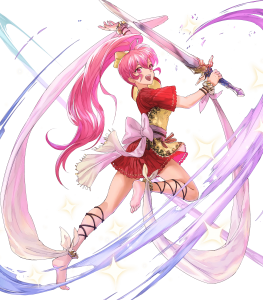 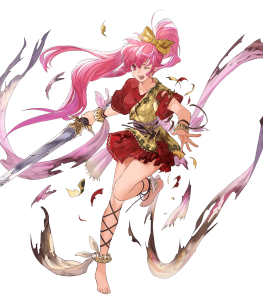 Heart and Soul of the Battlefield (Offense)

Focused on the beauty and grace of her appearance, Phina joins as an Infantry Sword Dancer and our first Archanean Dancer! Thanks to a great offensive statline, her Rapier, and her ability to refresh, Phina has no trouble finding her place in the meta.

Boasting a great offensive statline for a Dancer at 35 Attack and 37 Speed, Phina already stands out as a Dancer that can fight very well and usually avoid taking natural follow-up attacks. In combination with her Rapier that grants Spd +3, effectiveness against Cavalry and Armored units, and Vantage, Phina is more than capable of dealing good amounts of damage both on Player and Enemy Phase. If desired, Phina can even opt for a different weapon such as a Wo Dao or Slaying Edge to deal higher or more consistent damage with her specials. However, Phina sacrifices some bulk for her amazing offenses, as she has 65 physical bulk and 62 magical bulk. While those are passable, she’ll be very reliant on her Rapier’s Vantage effect to help her OHKO enemies before taking more damage.

Phina’s support capabilities are naturally very high, since she can sacrifice her action in exchange for an ally’s. This greatly increases her team’s flexibility, as the team can better adapt to more situations. For a pure support build, Phina can utilize Geishun and 2 Chill skills in her B and S slots.

Being an Infantry unit is very beneficial for Phina. She can utilize skills from her allies such as Guidance and Ground Orders to refresh units farther away, reach enemies, or retreat when necessary. Infantry-effective weapons are incredibly uncommon as well, so Phina usually doesn’t need to worry about being OHKO’d.

For someone so focused on beauty and accessories, Phina is a fantastic unit on the battlefield. She can both fight and support very efficiently, and she’ll always pull her weight thanks to her amazing flexibility. She and Hilda would be good friends, don’t you think?

Phina’s 35/37 offensive statline is excellent for a Dancer. If desired, Phina is more than capable of becoming an offensive Dancer, especially in combination with her Rapier.

With her Rapier’s dual-effectiveness against Cavalry and Armored units and its innate Vantage, Phina can score KOs on many units her allies and other refreshers may not be able to. Vantage boosts Phina’s survivability if she can OHKO an enemy, as she usually won’t need to take a counterattack before OHKOing.

The combination of having the Rapier, a great offensive statline, and Dance helps Phina fulfill both a combat and support role at the same time. While her Resistance is too low to utilize Ploys, she can still use Chill skills to support her allies.

While 65 physical bulk and 62 magical bulk isn’t awful, Phina is very prone to being 2HKO’d. Thankfully, this can be partially mitigated thanks to her Rapier’s Vantage effect.

This is a killer build for Phina. Her Rapier has Vantage on it, and along with Close Call 3, Phina should be fine around a lot of enemies, but Close Call helps her retreat as she has low defensive stats. Phina's Swift Sparrow 3 helps boost her damage output, and increases her Flashing Blade usage. Time's Pulse is for a quickened Luna so only one hit will be needed to charge her Luna.

Phina is both my main dancer and my anti-armor counter, thanks to her killer offensive spread and her personal weapon.
Swift Sparrow 2 and Death Blow 3 work in tandem to give her a +10/+4 to Attack and Speed respectively. This further solidifies her role as an optional offensive nuke, even though her purpose is primarily supportive.
Hone Atk 3 lets her buff her allies as well as give them another action. Wings of Mercy 3 is also a rather versatile skill -- she can take out foes that threaten an ally, dance them out of the way, or provide a buff to help their offensive capabilities.
Galeforce can be replaced with Glimmer or Moonbow since it'll be hard for her to activate it without a Blade skill, but it's a great Special for longer maps such as Tempest Trials.

High investment Phina the Nuker of Cav. Lines and Armor Stall. Yup... its possible and to do it... just remove Dance of Phina (because Dancers cannot be danced) and run 2 Peony or 1 Peony and 1 Eir(Without Miracle Boost for Desperation) on Aether Raids. (In my case I run 2 Wings of Mercy Peony). Beeing fragile and just Player Phase. She can be activated by stepping in a Bolt Trap or Bolt Tower+Duma.

Originally I invested into her for ROKKR events because effective against weapons like her Rapier allow for max 200k Rokkr scores. During Rokkr, I run AETHER special on her and Flashing Blade Seal to speed it up.

Outside of Rokkr, it is modified to this pretty straight forward setup. After her initial encounter to prep her special (easy to do with a DC baiting while utilizing her dance support), she will hopefully have sustained enough damage to activate the vantage effects of Rapier.

Special Spiral is there to ensure that every time she counters back first, it's with a heavily loaded special.

Threaten Atk/Spd 3 made sense because she'll need all the offensive support she can get and this helps her to take a bit less damage since her bulk is MEH, however there are plenty of other viable options like Def Smoke or of course something tailor made for a specific team.

Brazen Atk/Def or Atk/Res or even Atk/Spd are both ideal, since the main goal is to ensure she hits hard on her special.

With vantage, you don't really need to worry about much more than her attack once you have activated her Special Spiral loop.

Moonbow is an easy choice because sometimes her attack just isn't high enough against super bulky units that aren't weak to her, and she doesn't actually need the special to kill armors and tanks usually since her base effectiveness covers that. Units with high def are going to be her biggest problem, so negating more of their defenses via Moonbow seemed more ideal than glimmer. I also have Ruptured Sky since it came with the DC and that has the benefit of adding Dragons and Beasts to things she's effective against.

Preferred IV: +Atk/-Hp
+Atk is standard on a unit with effective damage (not to mention, dual-effective damage). -Hp helps her get into Vantage range easier. The order of best assets is as follows: Atk, Spd, Def, Res, with Hp as the worst asset.

Weapon: Rapier
No surprises here. She is basically Hoshidan Summer Michaiah, but quick. The extra speed can be offensive as well as defensive, preventing doubles. Having Vantage is also important, as it's a Vantage-SS build.

Assist skill: Dance
This build won't see her using this skill as much as she should, but this is very welcome utility.

Special: Glimmer
Glimmer scales much better than Moonbow when you consider that high defense units are usually armors - units she's already dealing 1.5x damage against. Calvary units usually have lower defense, so Moonbow won't ever be as effective as Glimmer in this scenario. Against other types of units, you'll be packing 66 attack with an asset, buff, and a Fierce Stance in her S slot anyway, so you won't be missing out on too much.

A slot: Distant Couner
Obviously, a Vantage-SS build is incomplete without DC.

B slot: Special Spiral
Together with her built-in Vantage, she will hit any offender first with a charged Glimmer and a dual-effective weapon. This will reliably murder any and all attacking cavalry and armor units. This is great because the units that go and stick out of the enemy pack unexpectedly to kill someone on your team are the horsies and armors with armor march/boots. Never again with a Phina at or below 75% health at the forefront.

C slot: Defense Smoke
Not very supportive, but the rest of this build never claimed to be. This will soften up enemies that're next in line to attack her.

S slot: Fierce Stance / Brazen Atk/Anything
Fierce Stance will reliably give her a high attack boost when she's in Vantage range (or out of it). +9 against armors and cavalry too. Brazen Atk/Anything works great as well, but she may want that extra attack when she's trying to get into Vantage range while simultaneously trying to kill her first enemy. Assist skills and F!Berkut's Kriemhild, which can bypass this little issue, will allow her to efficiently rep an attack Brazen.

Overall:
Having Vantage in your weapon is incredible, allowing the use of the all-powerful Vantage-SS build. being dual-effective is double-incredible, meaning you can be a bit weak on the offense and the 1.5x multiplier will compensate (not that Phina qualifies as 'weak on the offense'). Units like Ares may use this build with Draconic Aura, but he would be nowhere near as effective as Phina when countering armors and cavalry units. Having this dual effectiveness can mean you're outpacing even CC-Vantage units like Nino and Tharja (though she's not dealing pure damage, her attack will be at 99 against armors and cavs if her attack is 66, which would compensate for that). Even when not battling armors and cavs, she'll pretty much kill most red and green units as well. And having all this power inside a dancer is the sizable cherry on top.

Getting her into Vantage range can be tricky outside of stepping on traps in Aether Raids or using assists/F! Berkut, but this is ultimately the weakness of very Vantage tank. She's not the best Colosseum scorer anyways, so any use she sees from the better players out there will be in Aether Raids, where getting into Vantage range is as easy as falling right into the enemy's trap.

This is a high-invest Phina. This is peak Phina, a pristine Phina. Your Phina doesn't have to be on this level to be effective, because tsuyoi Phina is tsuyoi, with or without this much investment. But with it, she will certainly be the tsuyoiest. To the point where you can just give her Reposition and call it a day, who tf even wants her to be dancing.