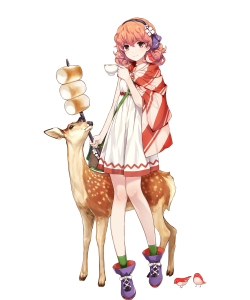 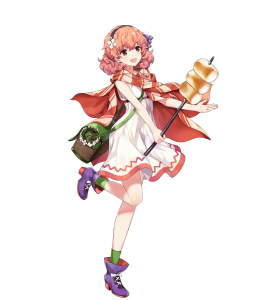 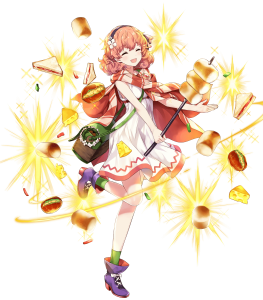 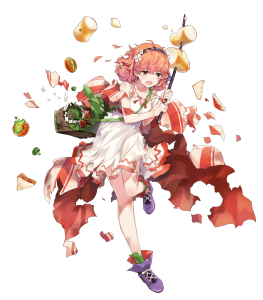 This build aims to capitalize on Genny’s offensive potential while retaining a solid support role. Since this set generally prevents the opponent from counterattacking Genny can choose to forego her bulk in favor of focusing on her offensive stats. As such, an asset in Attack makes for the best overall option that Genny can take in order to maximize her damage as well as the potency of her healing skills. Another option is investing into Genny’s Speed through. Although an Asset will only bring it up to a base value of 28, a bit of support through buffs such as Hone Cavalry gives Genny enough Speed to double a solid range of opponents.

Since Genny already has Wrathful Staff in her base kit, the Dazzling Staff refinement is chosen for her potential weapons. As for the weapons themselves, Pain+ has the potential to cripple an entire enemy team. Not only will deal a free 10 after-combat damage to Genny’s target, but also to opponents within two spaces of said target.

Gravity+ makes for another fantastic choice of weapon against high-mobility teams by crippling the movement of the target as well as surrounding enemies. Combining this with an ally’s movement assist such as reposition or a refresher can make Genny virtually untouchable.

Moving on to main skills, Atk/Res solo makes for a fantastic option by granting Genny a significant boost to her key stats when not adjacent to any allies. For one that wishes to invest in Genny’s Speed, Atk/Spd Solo also makes for a fantastic option. For a more budget options, solid stat boosts such as Attack +3 are suitable options for increasing her damage output.

The core of this build involves running Wrathful Staff together with a Dazzling Staff-refined weapon. Not only does it remove the damage penalty tied to staves, it also prevents any opponent from counterattacking when Genny initiates. This combination essentially turns Genny into a ranged magical Firesweep user.

Pain+ pairs exceptionally well with Savage Blow in both the C and Sacred Seal slot by giving Genny the potential to do a staggering 24 damage to opponents around her target after combat. Not only does this deal massive indirect damage, but it also knocks opponents out of high-HP thresholds such as Quick Riposte and Guard. A more team-synergetic option are class-exclusive buffs such as Hone Cavalry, as Genny will excel the most on a cavalry-centric team.

Although somewhat unorthodox for a staff unit, another great way for Genny to make use a Pain+ and a particularly effective choice for Aether Raids is the Vantage sweeper setup. Since this build is heavily reliant on taking out opponents in only one hit, an asset in Attack is the most desirable nature that Genny can receive.

By significantly reducing the health of both her target as well as enemies around her after combat, Genny will be able to take them out in only a single hit when they initiate on her in Vantage range. This can also be combined with Savage Blow in the C slot for even greater out of combat damage after combat when Genny initiates.

The most notable weakness of this build are opponents that prevent counterattacks or disable skills that change attack priority. As such, be wary of any Dazzling Staff healers, Firesweep users, or any unit equipped with the skill Hardy Breaking. Miracle makes for a uniquely useful choice of Special with this build. When charged, Genny has the freedom to take an extra hit from them without the risk of death as long as her HP is above 1.

The main focus of this set is running Close Counter with Vantage. Upon hitting the HP threshold for Vantage, any subsequent opponents that initiate on Genny are forced to take the at least one hit from from her before having the chance to counterattack. With this combination, Genny can potentially take out multiple opponents in the Enemy Phase completely unscathed.

For the Sacred Seal, anything that boosts raw damage during the Enemy Phase such as Brazen Atk/Res makes for a stellar choice.

This build is primarily centered around Genny’s role as a support unit, making Attack and Resistance the ideal boons that she can receive. Additional Attack makes healing assists such as Recover+ more potent while a boon in Resistance allows Genny to be a better overall support by allowing her to effectively utilize Ploy skills.

Gravity+ has great utility by crippling the movement of the enemy team, making positioning much easier for your own allies as well as taking advantage of Genny’s high movement. Another great choice of weapon is Panic+, particularly against teams that heavily utilize field buffs such as Hone and Fortify. Finally, Witchy Wand makes for a super effective choice in Aether Raids by preventing opponents from accelerating their Special, greatly reducing the damage that they are able to do.

Despite healers being generally limited in their options, there are a few standout Specials for Genny to take. Genny’s native Fireflood Balm makes for a particularly great support option by granting allies a significant boost to their Attack and Resistance on use.

Both Restore+ and Recover+ make for good healing assist options. Recover+ heals a significant amount of HP and scales based on Genny’s already impressive Attack while Restore+ trades some healing potency for the ability to cure allies of status ailments such as Panic and Gravity.

All being relatively cheap and effective, a visible stat increases such as Atk/Res 2 gives Genny the best overall bonus to her key stats. If unavailable, both Attack +3 and Resistance +3 make for suitable alternatives.

In addition to her already high mobility, Genny can run Wings of Mercy in her B slot in order to warp when her allies are low on health. This gives her amazing leverage as a team support, as she will be able to move around the map effortlessly in order to heal teammates. Aside from this, Live to Serve is another option that grants Genny great self-sustain when healing. This gives her the opportunity to tank opponents if needed.

Thanks to her fantastic Resistance, Genny can make effective use of Ploy skills such as Atk Ploy and Res Ploy. This makes her a better overall support by granting her the role of a debuffer, lowering the stats of multiple opponents at once. These can be combined in both the C and Sacred Seal slot for an even more powerful combination of debuffs. Outside of this, Attack +3 is a good Sacred Seal option for increasing the potency of Genny’s healing assist.

The weather gets warmer but healers often stay the same. Genny’s picnic iteration retains a statline very similar to her base version with very strong values in Attack and Resistance. Through the use of the coveted Wrathful + Dazzling Staff combination, Genny is able to deal significant damage if not outright killing them without any chance of retaliation. On top of all this, Genny also comes with all the benefits of being a cavalry unit such as enhanced mobility and access to class-exclusive buffs.

Genny’s statline naturally lacks in physical Defense. With only 49 physical bulk at base, Genny should avoid confrontation with Defense-targeting opponents at all costs. In addition to this, Genny’s low base Speed take away from her both offensively and defensively, as she will need heavy support in order to perform and avoid follow-up attacks.

The benefits of being a staff unit aren’t without their downfalls either. Healers are very limited in the skills that they can utilize, as their class blocks them from using many powerful skills such as Death Blow and Life and Death as well as any offensive Special such as Iceberg and Moonbow. Genny’s status as a cavalry unit also serves as a double-edged sword; not only is she susceptible to certain effective weapons, her movement can be severely hindered by terrain obstacles such as forests and trenches.

Despite this, Genny still performs really well both in combat and as a support thanks to her exceptional Attack, cavalry mobility, and Wrathful+Dazzling combination.

Genny’s standout 36 base Attack allows her to deal heavy damage to opponents as well as effectively utilize skills such as Recover+.

In addition to her superior mobility, Genny has access to class-exclusive buffs such as Hone Cavalry

As a healer, Genny is locked out of a countless amount of powerful passive skills as well as any offensive Special. This limits her overall potential as a combatant.

With only 49 physical bulk at base, Genny is highly susceptible to getting killed in only a single hit by most physical attackers.

In addition to taking away from her offensive potential, Genny’s low base Speed makes her highly susceptible to getting doubled by opponents.

While being a cavalry unit has its advantages, it can also be a detriment. On top of forests and trenches making it harder to navigate maps, Genny has an innate weakness to cavalry effective weapons.

This build allows Genny to act use her massive Atk and Res stats as a Magic tank. As long as A/R bond is enabled there is not a single magic unit in the game that Genny can't tank without them activating their special. When Genny gets to receive Cav buffs, she can outright kill, many of the most offensive mages in the game like Lilina, non-fury Nino, Winter Tharja, Reinhardt, and uncharged Ophelia during EP. The few mages that do survive will be crippled with single digit hp left over without being able to counter thanks to her built in wrathful staff allowing a free dazzling refine.

Unfortunately in order her to be able to actually kill opponents she is pretty much locked into Toasty Skewer, as it has a little more Mt than other staffs that lets her get crucial kills on most mages. The draw back of course is Toasty Skewer doesn't have any offensive utility, meaning all she can do against beefy units during PP is a safe poke.

Spring Genny is a upgrade for the regular Sheep, she has similar stats but having access to Def Opening, Wrathful staff and her new staff; She becomes in a great support who can gives a decent amount of res/def to her allies.

Sadly her Def is very low so getting Def as boom won't change her chance to survive; Also her speed is a bit poor so getting the dazzling version of her staff helps her to attack and survive.

Improving her attack and Res should be a priority, even more having atk ploy with her very good res.