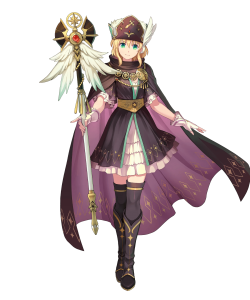 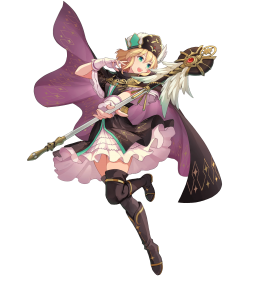 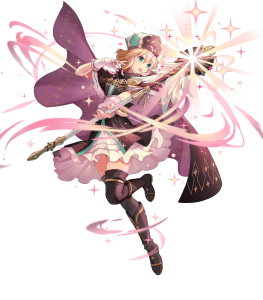 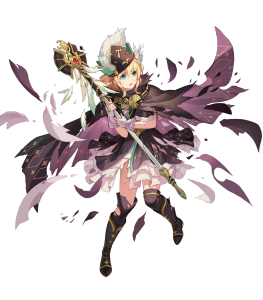 when you binge all the Cardcaptor Sakura seasons in one day... (RazzleDazzle Offensive)

Weapon: Dazzling Palm Staff+ / Dazzling Staff of Twelve+ / Dazzling Observant Staff+ / Pain+ / Gravity+ (All can be Wrathful if Dazzling is used in B slot)

Contrary to her rather flavorless base kit (which doesn't even matter in a game where you can inherit almost any skill in the sun to any unit) and the expectations of players expecting little from a free healer unit, Nanna releases a new generation of Heroes with a statline that's very competitive with other recently released healer and mage units.

The first thing that pops out is her base Speed of 41, which is the highest of all healer units (at this time of writing) and consistently helps her avoid follow-up attacks while achieving many herself. Comboing with that is Nanna's Attack of 35, which, while respectable at best, nonetheless falls within the ballpark of other elite offensive healer units like Summer Hilda, Sara, and Young L'Arachel. To top it all off, as usual of healers, Nanna gets access to Dazzling Staff, enabling her to exercise her nice damage potential without fear of counterattacks. Expect her stats to give solid backing to her offensive contributions and healing amount without feeling downgraded from the best of the best.

As a flier, Nanna benefits from flexible terrain passage. While simple, this becomes an even more evident utility in situations where she can exercise her staff range (whether attacking two spaces away or healing allies) in otherwise awkward spaces, especially mountains.

Furthermore, Nanna has access to the Rein skill line, a strong self-boosting and joint beneficiary tool exclusive only to fliers. Inheriting one helps Nanna overcome some stat deficiencies that are typical of generic staff healers (outside of running Palm Staff), especially damage output with Spd/Res Rein.

We normally wouldn't expect much out of a low rarity unit that's freely acquired, especially if they're just mere healers. The fact that Nanna herself  actually manages to maintain fair competition and easier mergability compared to modern day offensive healers, however, makes her free status an actual plus rather than a neat afterthought.

The ultimate thing that weighs Nanna down versus other preferred healer choices is her lack of a unique staff. While this doesn't impact her inherent effectiveness, she runs into the same trouble that other generic staff healers run into. That is, compared to higher-grade healers whose weapons feature loads of effects like automatic penalty erasure or a strong Atk/Spd combat boost (or even more and more of that), Nanna is limited to generic utility inheritables while generally lacking exceptional combat choices.

In addition to a rather limited staff selection as discussed above, being a healer in itself drags Nanna through quite a few inconvenient loops. For one, in order to bring Nanna's damage output to acceptable levels, Wrathful Staff in some skill slot is required as healer damage is otherwise halved. As usual of other healers, this usually results in limited, "wasted" skill slots and lack of passive skill versatility, especially when Nanna is fitting in Dazzling Staff somewhere as well.

Additionally, while being a flier is nothing but beneficial for a healer unit (especially with access to Reins and terrain flexibility), being only able to move two spaces is an opportunity cost that's noticeable compared to running cavalry healers. In fact, Nanna's actually competing with herself for an easily mergable Aether Raids Defense healer choice, and loses edge from covering less overall ground.

Saying nothing of the obvious one-shot weakness to bow weapons and other forms of flier effectiveness, Nanna's defensive statline of 40 / 23 / 28 is actually decent for a healer and can be supplemented with Palm Staff and an Attack-based Rein. Overall, however, it is only barely enough to stomach single hits from the majority of strong hitters