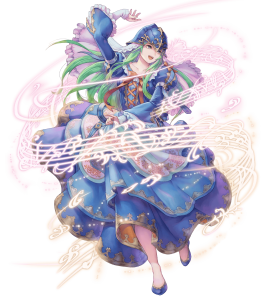 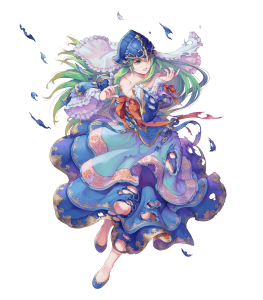 A surprise addition to the Splendid Soiree banner, Soiree Nephenee is a colorless archer with the ability  to use Dance. She is one of the few units to combine excellent offensive stats and team support capacity, making her one of the most versatile units in the game.

35 Attack and 36 Speed form an exceptional offensive statline, which alone lets her surpass many of her peers. Thanks to her large stat total of 157, Nephenee’s defenses are no slouch either, being better than almost all other offensive archers. Her statline completely eclipses Bridal Cordelia’s, but her Attack and Speed alone are enough to outclass most colorless archers.

Nephenee’s base 35 Attack and 36 Speed are the primary reason she is able to excel offensively. Although she lacks a personal weapon, she can still make use of traditional options such as a Firesweep Bow or Brave Bow.

User of the coveted Dance

Nephenee is a refresher, meaning she can use Dance to give one of her allies a second turn. This allows Nephenee to always make full use of her turn, and makes her much more adaptable. She can ensure that the most valuable member of the team on any given turn gets to go again.

Base 24 Defense and 25 Resistance are far from the worst seen amongst colorless archers, but they remain low compared to other units. Nephenee is unsuited to defensive roles and should instead focus on abusing Dance and her solid offensive stats.

Can’t be the target of a refresh while carrying Dance

Units who carry a refresh move (such as Dance) cannot themselves be refreshed by a similar move. Offensive units are some of the best candidates to have their turn refreshed, which leaves Nephenee in an odd dilemma. There may even be situations where it’s best to unequip Dance, although this in turn removes Nephenee’s unique niche as a strong offensive dancer.

(My unit's stats at bottom)

CORRECTION to SPECIAL: Ruptured Sky (Weirdly not an option to chose from drop-down for me!). Typically speaking, she will hit with Ruptured Sky on every engage. I would probably still use Glimmer or Moonbow, if Ruptured Sky wasn't an option.

This build is insanely lethal and this season I have used her at a +2 in Arena (T21) to get all the kills for the +12 Bonus pts during each round.

You don't need Fury 3 with Desperation, because her bulk and speed are enough that tanky units can't hit her twice and she'll survive a single hit and Desperation ensures that she's safe after that.

Flashing Blade 4 is insanely good because of the +5 to damage on EVERY hit (better than +3 from Fury) and enables me to slot a standard Atk/Spd 2 Seal. The combination of all her skills gets her damage and SPD output to a superior place compared to a standard Fury build which gives her bulk that she doesn't really need (especially when Fury whittles away the bulk it gives).

She tanks hits from L!Alm really well because she's still too fast for him to double and she's tough enough to survive the hit. This single hit activates her special and Desperation.

Joint Hone Spd is a great offensive choice compared to Spd Tactic as it enables her to receive her own buff which is critical to her build, while still sharing it. If she's more background or support then SPD Tactic is the better option.

Atk/Spd 2 is vital to me with fewer merges and any little bit helps, and there aren't really any other seals that she needs. Her role is simple: Kill on player phase or dance.