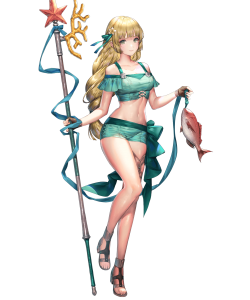 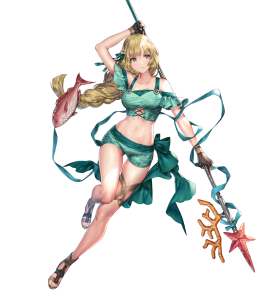 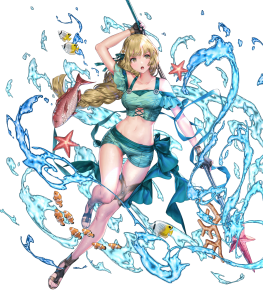 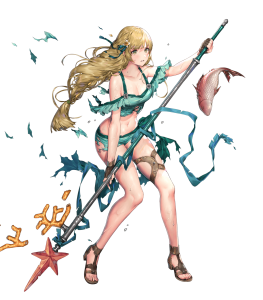 Summer Ingrid has a very strong statline, even amid harsh competition from fellow Blue Lance Fliers. Her Speed is a blistering 42, while her Attack is a serviceable 34. She additionally has a mixed bulk, which can be important in high tier modes, and is fast enough that very few units in the game could naturally double her.

While many units have to choose between Offensive or Defensive capabilities, Ingrid's dual-phase Starpoint Lance allows her to be flexible for your team, while her native B slot, Guard Bearing, further increases her tanking capability to make up for her lower defensive stats.

The combination of her Speed and her defensive skills and healing makes it very difficult to defeat Ingrid in a single combat, which can make her lethal on Defense teams.

While Guard Bearing is an excellent skill, Ingrid suffers from not being able to utilize a skill like Null Follow Up, which would guarantee her own doubles and shut down her opponents' skill-granted doubles - which are particularly lethal to her, given Guard Bearing's bonus stats are only in play for her initial hit. Despite all of her stat investment into Speed, Ingrid cannot protect herself against an opponent who runs a skill like Quick Riposte or Bold Fighter.

Ingrid's base kit is designed to be used for a single combat per phase - Starpoint Lance only grants her additional stats and healing for her first combat in any given phase, while Guard Bearing only mitigates damage in the first hit in the Enemy Phase. Therefore, she is ill suited for a task such as omnitanking or Vantage tanking in Aether Raids, and loses effectiveness during Player Phase when she is refreshed via a Dancer or Galeforce.

This build maximizes S!Ingrid’s already impressive statline while also bulking up her defense and res to prevent too much HP loss (in case she engages a second time during player/enemy phase).
Special: Noontime/Sol works to give Ingrid sustain from Fury 4’s HP deduction. Even though her lance regains HP for only the first combat, Sol will make sure she can move forward while keeping Fury 4’s buffs if Ingrid needs to fight once more.
A slot: Fury 4 (3 can work too) gives her an added +4 bonus to all of her stats (exc. HP). Not to mention, if we include her weapon’s buffs too, she can gain +9 (exc. speed which can be capped at +12) stat bonus at her first combat. This makes her more tanky and offensive.
B slot: No need to change the B skill, it is extremely useful on her and allows her to tank her first encounters. If you want, you could experiment and put vantage or desperation.
C slot: It’s flexible with any odd/even stat wave depending on how you want her to play. If you want an offensive based pegasus, then odd/even atk wave would be helpful.
S seal: Also flexible too depending on your desired playstyle. If you want Ingrid to be tankier and faster, Steady Posture would work.

This build wants to make of S!Ingrid a bulky lance flier who can tank any attack if she's attacked by only one enemy since she comes with decent defense and res on top of an amazing speed stat.

We'll keep her default weapon, the Star point Lance, equipped because it gives a nice +5 in all of her stats in addition of a nice healing of 10 HP after her first combat in both phases.

For the A slot we'll pick Steady Posture 3 as it gives +6 Def and speed to Ingrid and the guard effect so she can't be knocked down by specials and/or won't charge specials.

For the B slot we'll be using the brand new skill she comes with, Guard Bearing 3. This skill has great synergy with her weapon because not only Ingrid will take 50% of the first foe's attack during enemy phase, she'll also be given +5 to all of her stats and a Renewal effect that'll make her literally unkillable by the first foe.

The C slot is flexible. I'll give her Joint Drive Atk since her attack isn't massive, but Pulse Smoke 3 is also good if you wanna obliterate Infantry Pulse teams.

Moonbow will be her special since it's only a 2 turn cooldown special that combines well with her attack stat which, again, isn't really the best.

For her Assist skill, pick the one you think will be the best for her. I chose Reposition as it's a good positioning skill, but if you want to use her for arena, you should probably pick a dual rally +.

Finally, for her Sacred Seal, I picked Brazen Atk/Def 3 because it'll allow her to resist other enemies attacks while also giving her
a nice Atk boost.

FEH Pass Loyalty Perks
If we already have subcribed to FEH pass for more than 3 months when the update is…
The reason I quit AR
I never played Ar seriously. I took pleasure in eliminating maps. I suppose some…
New Account brave options
Considering L!Ike and Fjorm’s weapon refine’s and new skills, which should I choose…
The idiotically large lore of Sugarsalt's Askr that Sugar made because one goat died: Book 4
I have promised I would do this soon So… here we go A Pointless Nightmare: Also now as…
Looking for ways to catch up to the meta after a 3+ year hiatus
Hi everyone, I came back to the ghame this July after stopping it around early 2018 …
Read More