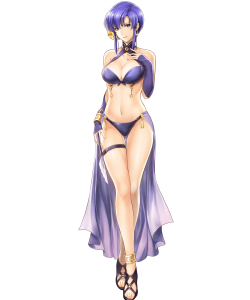 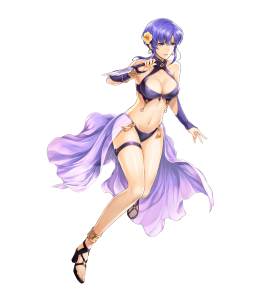 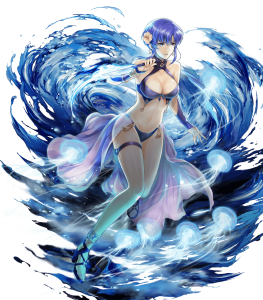 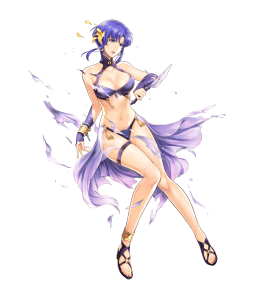 As this build is tailored for offensive play, Summer Ursula will ideally want either an Attack or Speed Asset in order to enhance her offensive potential. Defense is her least desirable stat and, as such, is the recommended Flaw.

Even deadly assassins need a holiday from time to time. Ursula, the Blue Crow, joins us for a trip to the beach in a tantalizing bikini. Summer Ursula is a colorless dagger cavalry focusing on offensive power.

Her offensive stat spread is great, sporting high Attack and good Speed. She also possesses fair magical bulks thanks to a decent Resistance stat that lets her take some magical punishment. However, her HP and Defense result in her being very physically frail. Being a cavalier, she also comes with the usual upsides and downsides, such as increased movement range at the cost of greater hindrance with terrain.

While Summer Ursula does not bring a lot new to the table, she is a strong unit in her own right. If one already has another dagger cavalier such as Summer Linde or Summer Gunnthrá, then there is not anything Summer Ursula can do that those two can’t. In which case, there is little reason to pull for Summer Ursula outside of skill inheritance or just pure desire. However, if one does not have either of the other aforementioned dagger cavaliers and is looking for one, then Summer Ursula is a versatile and powerful unit that will be able to perform well in a variety of roles thanks to the many daggers on offer.

Summer Ursula comes with an impressive 36 Attack and 34 Speed. This Attack stat is one of the highest amongst cavalry units and allows her to deal strong damage per attack and helps her to better utilize skills such as Heavy Blade. 34 Speed is also good and can be quite easily boosted through stats and skills in order to grant her with strong follow-up potential.

Being a cavalier, Summer Ursula gets to enjoy the benefits of three movement and cavalry buffs. Three movement gives Summer Ursula further reach and greater flexibility with positioning. Cavalry buffs are also easy to access and can be a cheap and powerful way to enhance Summer Ursula’s overall potential when she’s alongside other cavaliers.

With 36 HP and 16 Defense, Summer Ursula is incredibly frail to physical opponents. With a total physical bulk of 52 before skills and buffs, she is liable to take a lot of damage, if not outright OHKO by physical threats. Dragons will also prove to be very dangerous due to the adaptive nature of their weapons.

Being a cavalier also comes with a fair share of weaknesses. Most notably, cavalry are hindered by terrain more than any other movement type. They are completely unable to pass through forests unless moved over by another unit with an Assist skill and are the only movement type slowed down by trenches. This means that certain maps will greatly affect Summer Ursula’s performance. Cavalry effective weapons are also fairly common, especially Micaiah, who will easily cut straight through Summer Ursula.

whit support from a Temari wielder or B!Micaiah, S!Ursula will get +24 dmg once she apply dagger effect on the enemies.
being a cav unit she will be able to position herself very easily, and having the highest atk of all cav dagger units a vantage build is perfect.
panic smoke can apply even higher dmg boost if the enemies have visible bonuses

This debuffing build grants her exactly 56 ATK which matches B!Eliwood for highest attack allowing them both to receive the Vision of Arcadia buff from L!Eliwood for +6 ATK/DEF.

SB+Atk + Fury4 = 56/38/20/28
A much rarer alternative which maintains BST and achieves average bulk after receiving VoA field buff. Spd +2 Seal may be employed to tie with Kaden for receiving Spd Opening 3 buff, but it is not that serious.

SB+Spd + Fury4 + Atk1 = 56/40/20/28
A much rarer alternative which maintains BST and achieves average bulk after receiving VoA field buff. This maintains access to Vision of Arcadia and grants access to Spd Opening 3, but at the cost of full smoke coverage.

SB+Spd + LnD3 = 56/41/11/19
More glass cannon-ish build which is easier to achieve, and adds +3 to overall speed which allows her to steal the Spd Opening 3 buff from Kaden or tie with him if he is also running LnD3.