A cheerful vigilante burdened with the horrors of war

Life of Frugality
Born in a village, Coli was made a refugee by the Archdemon War. She joined a band of vigilantes in order to help protect her family and has a talent for stealing items from thieves when she attacks them.

Coli's kit can come in useful on certain floors of the Abyss, Automaton Tower, Spirit Altars, or the Juleeve Council boss in Raid. If building her for these PvE encounters, it's probably best to build her for pure DPS and rely on her multiple S1s to build chip damage and Souls for the rest of her team.

Focus on all of the DPS stats: Spd, Atk%, Crit Chance, and Crit Damage. Coli's damage scales with both Atk and Spd, and she needs to get her turns in quick succession so she can take advantage of the multiple hits on her Stealth. As such, Spd is the number one priority (as usual). However, Atk% is also very important, especially because Coli's barrier scales with Atk.

If you have some CR-push or Spd buffs in your party, you probably want Coli to equip an Attack or Destruction gear set. Otherwise, she probably needs Speed.

For this build, don't gear Coli with Effectiveness. Her base chance of applying CR-pushback is already 100%, and she'll deny more turns by killing the enemy more quickly instead. Consider the CR-pushback a pleasant bonus instead.

The Artifact most players think of first for Coli is probably Dust Devil, due to the chance of proccing two Stealthed S1s in a row (meaning four attacks total). However, Dust Devil is also unreliable, capping out at a 30% chance to proc. It also just helps Coli do what she already does, when having too narrow of a focus is one of the problems with using Coli. It's still very good for her, but it may not be the best choice in all circumstances.

An alternative to Dust Devil is the evasion Artifacts: Violet Talisman and Moonlight Dreamblade. Both increase Coli's Atk (meaning both her damage and her barrier) and give her a chance to reduce damage by evading, which makes it harder to break her barrier and thus her Stealth. Being able to buff her own Atk also makes her a little more self-sufficient, which is nice.

Finally, Torn Sleeve can be a great choice for Coli if you have it. She already wants to build Atk for her barrier, so her Bleeds can be pretty nasty, and she can stack them twice with Stealthed S1s. This also helps her synergize with Bleed- or debuff-focused allies like Dingo or Surin, making her a bit more of a team player. (It can even make her semi-useful for Wyvern 11, since she can apply multiple Bleeds to add to Wyvern's debuff counter.) 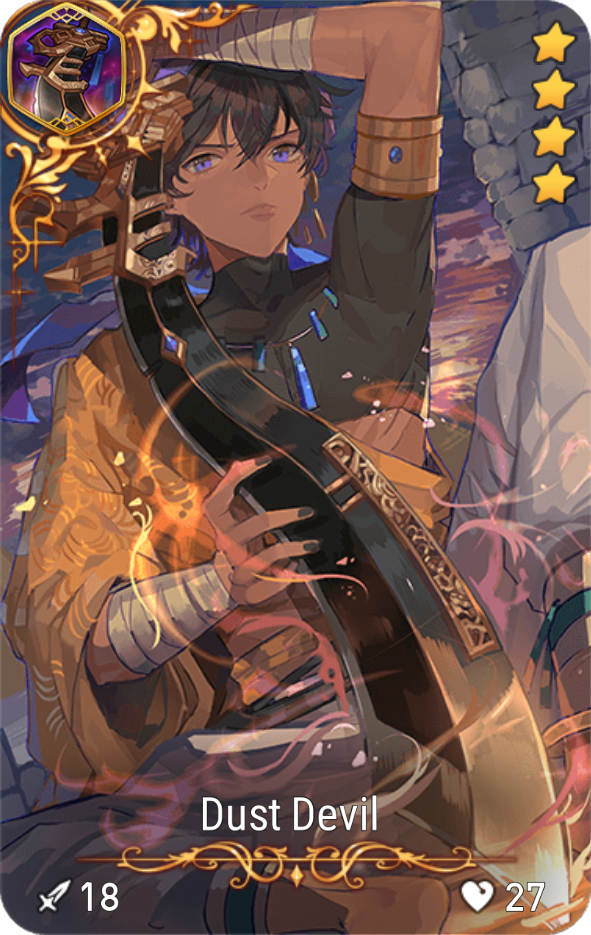 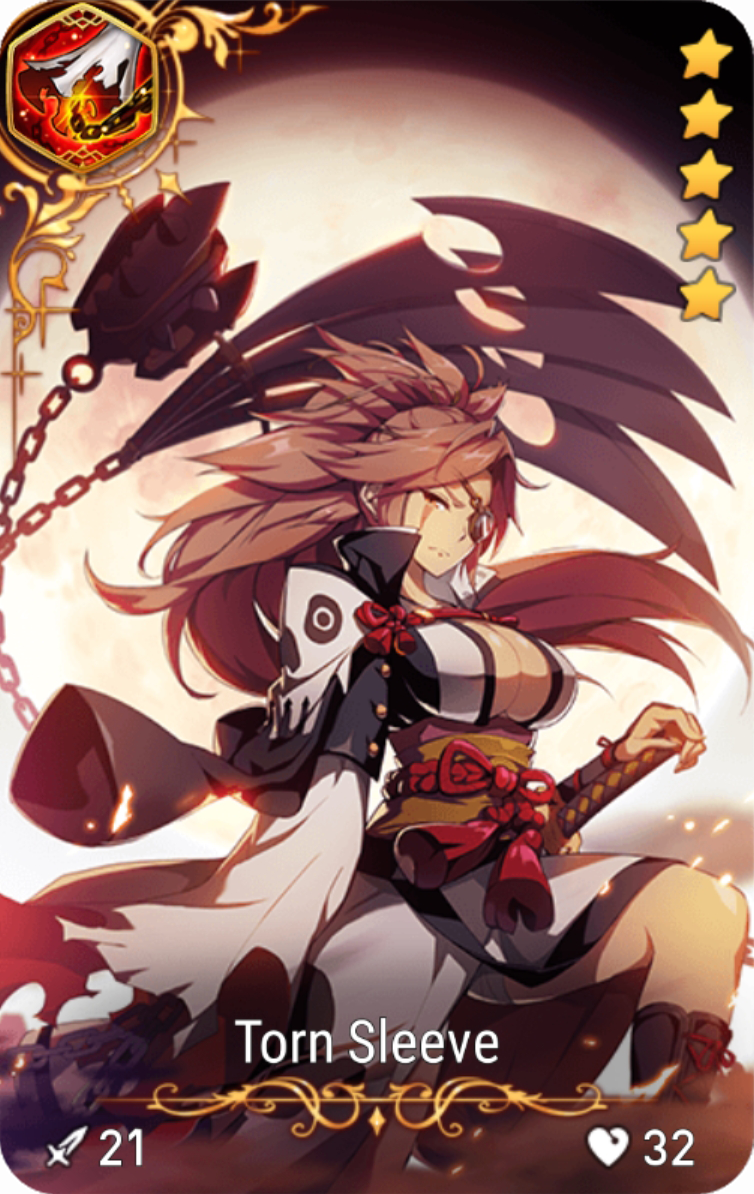 This is an unorthodox but interesting team that puts several disparate mechanics together for some unexpected synergy.

Coli is an Ice-element hero with a recognizable niche that she is fairly good at performing. She is a strong Combat Readiness debuffer who relies on multiple attacks with her S1 to rack up damage and repeated applications of Stealth to keep herself alive. She even throws in Stun and Speed-based damage multipliers to sweeten the deal.

Her main issue is just that there isn't really a good place to utilize her niche in currently existing content. As an Ice-element hero, you would want to bring her to Wyvern 11, but Wyvern is immune to CR-pushback, so she can't do her job there. Almost all bosses are immune to Stun, too, so she loses utility in most PvE content.

She sounds better for PvP, where she can lock down single targets with Stuns and CR-pushback, but CR-pushing your party is almost always better than CR-pushback on your enemies, since buffs can't miss while debuffs can. There are also better ways to lock down enemies, like Auxiliary Lots' AOE Silence or Wanda's 2-turn Stun.

In summary, Coli isn't a bad unit, but the current Epic Seven environment doesn't favor her. In the future, there may be content that is better-aligned for her strengths, but for now, she's often outclassed by other options.

Coli is the queen of single-target CR-pushback. Her S2 and S3 both cause heavy CR-pushback to her target, and her S3 further hobbles the target by adding on a Stun. When Soulburned, her S3 ignores Effect Resistance, making it much easier to land the CR-pushback and the Stun.

Stealthed Half the Time

If Coli alternates her attacks with S1s (S3 > S1 > S2 > S1), she keeps Stealth up on herself pretty much every other turn. This can make it difficult for enemies to attack her. It can also help funnel attacks towards heroes that you WANT getting hit, especially heroes with Counter sets like ML Ken or Destina.

Coli's S2 not only puts her into Stealth, but it also gives her a barrier (that scales off her Atk). Hits that damage but don't break a barrier will also NOT break Stealth! This means that a weak AOE attack (such as Elena's S3 or Elson's S2) won't knock Coli out of Stealth just before she gets the chance to use her S1.

Lots of Hits While Stealthed

Coli's S1, Ambush, activates twice if Coli is stealthed when she uses it. Any turn where Coli is Stealthed, she should be using her S1 in order to maximize its damage. Equip her with Dust Devil, and she can trigger Ambush four times when Stealthed instead of two! A side effect of so many individual attacks is that Coli is quite good at generating a lot of Souls for your team to Burn.

Slow For a Thief

PvP matches are determined by who moves first. As a lockdown character, it is important that Coli moves before her opponents so she can delay their first turn with her S3. Unfortunately, Coli is one of the slower Thieves in Epic Seven. Even decked out in Speed gear, she may not be able to move fast enough to do her job properly.

CR-Pushback is Easy to Counter

CR-pushback is definitely Coli's niche. Unfortunately, CR-pushback is also pretty easy to counter. It can be resisted by Effect Resistance (including Elena's Effect Resistance buff on her S3) and is outright countered by Immunity, which blocks the effect. It is also countered if the enemy has strong CR-push, like Lots or Auxiliary Lots. Because Immunity and CR-push are such common Arena effects, Coli has a hard time making her presence felt in PvP.

Stealth is Easy to Counter

Stealth may help Coli avoid getting one-shot by single-target nukes from heroes like Luna or Violet, but it's easily countered by strong AOE damage, which is common both in PvP and PvE. The barrier Coli gets on her S2 can help her avoid weak AOE damage, but it's not going to save her from a Vildred or a Ludwig. Even worse, if her Stealth is popped, Coli loses a lot of her damage-dealing potential.

Limited By a Narrow Niche

As described in the introduction, Coli's real problem is that her niche is too narrow to make her worth building right now. Her DPS isn't high enough for her to one-shot key targets, her Speed isn't high enough for her to initiate in PvP, her lockdown-focused role doesn't have enough utility for PvE, and Stealth is easily countered. Other Ice-element heroes like Alexa, Lena, and Taranor Guard are going to be more useful in more situations than Coli, making it difficult to justify building her.

Which building to update first
@SoraAmano wrote: imagen726×407 173 KB Steel workshop…
New in E7
@SoraAmano wrote: Basically I’m new in the game, is there…
An arena spike?
@Cam_the_man wrote: I just got Epic 7 Yesterday (I have FEH…
Multiple Accounts
@Jokun wrote: Hi I have a 3 accounts (global, asia, europe)…
Who should I make 6 star next?
@genx wrote: I have been playing the game for about a month…
Read More