Choose Your Legends 5 Free Summon: Who to Pick? 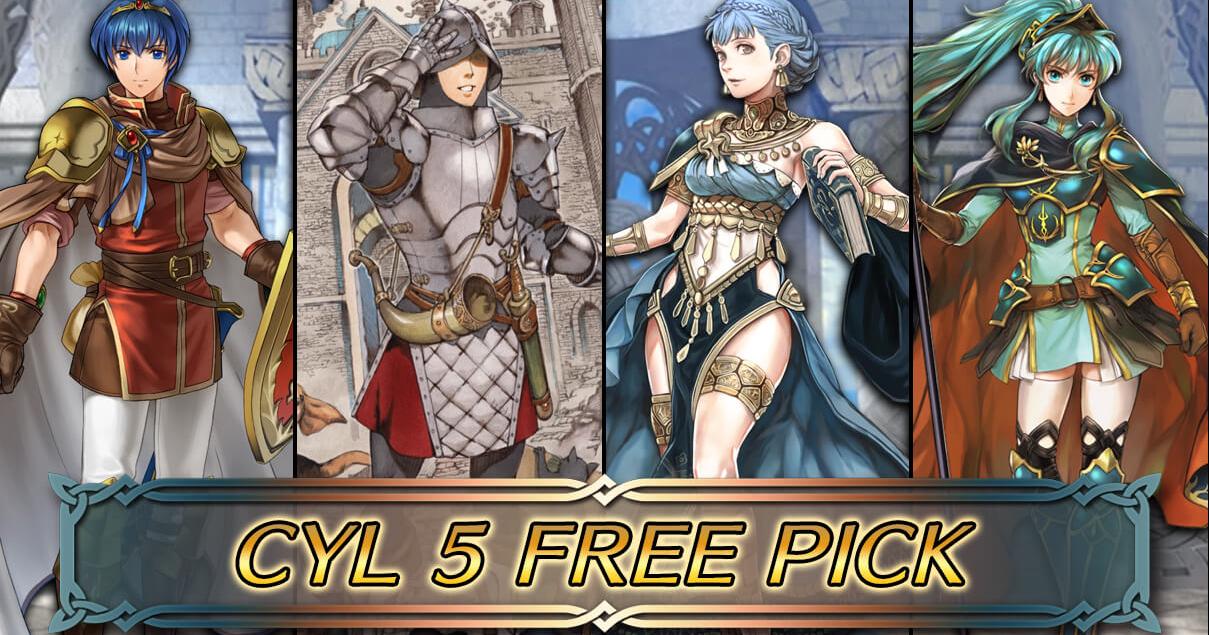 As per usual traditions in Fire Emblem Heroes, each player gets to choose to get 1 free copy of a unit in the Choose Your Legends banner. In this article, we will break down the reasons a player might want to select a particular hero. A disclaimer; if you have your favorites, feel free to pick them! This article is mainly for players who are on the fence about selecting the free unit.

We will, in particular, discuss the unit’s potential in the following:

In essence, Marth shares many similarities with many of the sword infantry introduced in the game; high ATK and SPD with modest amounts of DEF, RES, and HP. Genesis Falchion gains additional effects based on the highest total number of visible buffs on 3 of his ally (and yes, outside of the original condition check, it is independent of the allies’ position on the map), and Shining Emblem provides an easy way to maximize the number of visible buffs onto the team as it works similarly to Fire Emblem on many versions of Marth who have the skill. It is also worth noting that this is the first time 2nd place units obtained a personal skill of their own.

In terms of base kit, it could be argued that the recoil on Distant Pressure could create problems for Marth as he is likely more suited for the enemy phase. While Marth does gain Vantage from Genesis Falchion, it is problematic against more bulky foes, be it in the likes of Aether Raids or many late-game Hero Battle maps.

Speaking of Aether Raids, Marth follows the same trajectory as a very competitive sword infantry with damage reduction in his base kit and Null Follow Up on his weapon. The biggest issue with Marth isn’t his performance, but rather his lack of uniqueness as there are already plenty of units in the same class that does almost the same job at an acceptable level.

Arena-wise, as per CYL traditions of stat total increase, Marth is the first Infantry to break the 185 BST mark, as the Duel skills now boost the scoring stat total of the skill to 180, having an extra 5 BST does somewhat allow Marth to score decently well in the mode. He is however not breaking any frontier in scoring as there are already Armored units that could score the same if not higher than Marth (this includes last year’s Brave Edelgard, which scores 190 due to the additional SP cost of a personal B skill).

As a free pick, Marth is a decent sword infantry with his kit based around buffs. However, due to stiff competition, Marth’s slightly superior performance might not be enough to justify players sacrificing their annual free pick for a unit archetype that has been done before. Newer players without the squad depth could pick up Marth as his base kit is more than serviceable without much commitment.

Gatekeeper: Nothing to Report

As an Infantry Tome unit, discussions of being an Arena unit would usually revolve around the use of the Duel A skill, and the same could be said for Gatekeeper as his stat total is below 180. However, having an additional SP cost from his personal B skill does allow him to score a bin higher, effectively matching Gatekeeper’s scoring beyond the modern standards.

Speaking of his personal B skill, Detailed Report offers absolutely zero combat utility. His weapon does have a Follow-Up negation akin to a substandard version of Maltet, but his low SPD is a huge suspect as he would be extremely susceptible to guaranteed follow-up effects. The amount of value of this skill however could not be undermined; he cranked the Obstruct skill up to a ridiculous level as not only did he obstructs ranged foes with a larger radius, he stops any form of warping effects within a mouth-watering 4 spaces.

Specifically for the latter effect, it could stop some of the AI interactions on its tracks as some of them precisely rely on warping effects. This includes the likes of Aerobatics, Wings of Mercy, Peony’s Gentle Dream, Bridal Catria’s Wedding Bell Axe, and most noteworthily; Ground Orders. Needless to say, this application is pretty much universal in all game modes.

Fodder wise he got a slightly improved version of Close Counter and Joint Drive Def, which is plenty useful for bulky ranged units similar to the likes of Gatekeeper. With that said though, the usefulness of Close Counter does come into question sometimes as there is now the option of simply running a Near Save ally nearby to deal with the melee match-ups.

While his combat potential is at best average for a modern tome user, Gatekeeper is likely the most meta-influencing of the batch due to his personal B skill providing utility for his allies. Veteran players are likely to benefit the most from Gatekeeper as it is a mechanic that never existed before in the game. Keep in mind that the developers could also start incorporating Pass in their new units (such as Takumi, but with better stats and effects), making the Obstruct effect on Detailed Report potentially something that could be countered in the long term.

Marianne’s main draw would be both her weapon and her personal special; her weapon is a modern upgrade of Kagero’s Dart with the first hit damage reduction and offensive boosts, while her special refreshes a unit within 2 spaces. For simplicity, players can view this special akin to a ranged Galeforce similar to Legendary Leif's Njolrun's Zeal.

As Marianne’s refresh comes from a special skill rather than an assist, this means that this cannot be stopped by the likes of isolation effects such as those from Mila’s Turnwheel and Summer Hilda’s Duo Skill. Marianne also does not incur any stat penalty despite having the ability to refresh, which does provide her a combat edge comparatively to her dancer competition. It is imperative however for Marianne to activate her special, so special acceleration such as those from Flashing Blade is likely a key to Marianne’s success.

Marianne would slot in nicely with any strategy that potentially wants a dancer. In Arena, Marianne competes with Duo dancers such as Duo Peony, but her higher base stat total offers her much more effective combat utility. In Aether Raids she could be used aggressively in a Galeforce setup with Wings of Mercy (be wary of Gatekeeper!), although it must be said that she could not refresh out of combat unlike many of the refreshers in the game.

While Requiem Dance is a unique mechanic that is not predated by existing skills, there are similar parallels that could be drawn with current units. Marianne is ideal for players who have a strong affinity to the player phase that is applicable in many game modes, as Requiem Dance does require the player to play aggressively to achieve its maximum potential.

Eirika is a modern cavalry lance unit with the sole goal of demolishing a single target, and it does so in a spectacular manner. Binding Reginleif is essentially almost all player phase unit’s dream with follow-up negation-neutralization (gee, what a mouthful), and damage reduction on the first hit. This meant that even against enemy phase powerhouses such as the likes of Brave Hector, they would be likely to take both hits. This could also be compounded by Moonlight Bangle as Eirika gains guard nullification and even more true damage on special activation.

Eirika is likely to be a relatively strong pick in Aether Raids Defense due to the very high damage ceiling. It is worth noting however that Eirika does not have any piercing effects that nullify damage reduction. This meant that Eirika’s damage could be padded out by skills such as from Flayn’s Caduceus Staff and Brave Edelgard’s Black Eagle Rule.

That is not to say Eirika is not a powerhouse unit under player control; Moonlight Bangle provides Canto, which offers Eirika flexibility in terms of hit-and-run akin to Reginn. Similar to Gatekeeper, Eirika has a higher score ceiling due to a personal B skill, which makes Eirika a potentially great unit to invest in should players dip their toes into the fodder necessary.

As for fodder, while Surge Sparrow does provide some cute synergy with how Brave Eirika works, it is not necessarily the best skill for pure player phase units as they do not benefit from the higher HP thresholds. It is a rather self-conflicting skill as while the healing is more likely for a bruiser such as Zeke, Duessel, and to some extent, Legendary Sigurd, boosting SPD specifically isn’t that helpful for such units either.

In all, Eirika has one job and she aced it; unga bunga Eirika hits hard. Eirika’s Canto effect along with the high damage ceiling lands herself to be the best pick for newcomers in many late game Hero Battle maps. Veterans would probably appreciate Eirika’s utility in both Aether Raids Offense (Canto) and Aether Raids Defense.