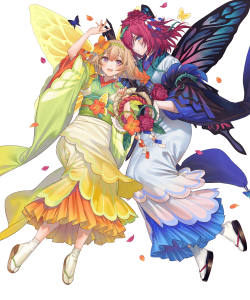 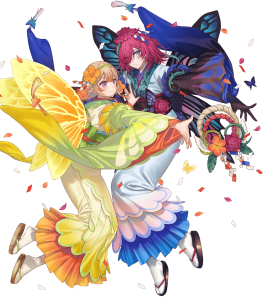 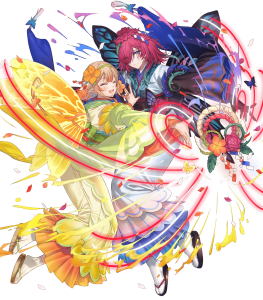 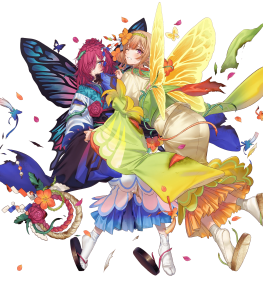 Weapon: Bond of the Álfar / Weaponless

Dream and nightmare as one! (Hybrid / General Offense)

With the help of Triandra, Peony’s offenses are actually quite strong. 34 Attack is more than serviceable for dishing out damage, and 40 Speed (43 with Bond of the Álfar) allows the Álfar duo to frequently perform follow-up attacks; these can be boosted with skills and support as well, making them a surprisingly potent offensive force. 34/40 offenses can serve a supportive role as well, as with enough visible Attack and/or Speed stacking, the duo will be able to soak debuffs from skills (such as Chill Atk and Chill Spd) and the Bright Shrine structure in Aether Raids.

Bond of the Álfar is the Álfar duo’s personal weapon. In addition to granting +3 visible Speed to Peony and Triandra themselves, it also grants +6 Attack to allies within cardinal directions during combat, significantly bolstering damage output. This can be particularly helpful for Vantage sweepers that rely on OHKOing enemies to circumvent their low bulk/HP, as +6 damage can easily be the difference between OHKOing and missing an OHKO.

Original to base Peony, Gentle Dream:

To say the least, this is a very powerful and exclusive Assist that makes the Álfar duo a fantastic asset on any team. The visible buffs help secure KOs and survival, while the Ground Orders-esque effect can make for creative and flexible movement that would otherwise be impossible.

In classic powercreep fashion, Peony and Triandra’s status as a Duo Hero comes with various advantages and practically no drawbacks.

As a Flier, the Álfar duo enjoys various mobility-focused advantages.

The combination of being able to seamlessly cross most terrain and having a plethora of strong mobility skills makes the Álfar duo very flexible in their capabilities.

34/40 offenses, Flier status, Bond of the Álfar, Gentle Dream, and Duo Hero benefits...the Álfar duo is undoubtedly one of the strongest units in the game, capable of fulfilling both offensive and supportive roles with ease.

Even when they’re together, Peony and Triandra suffer from terrible bulk, with only 53 physical and 60 magical. The Álfar duo is constantly at risk of being OHKO’d by both physical and magical enemies, so keeping them away from Enemy Phase combat is usually best.

Being a Flier comes with nice mobility advantages, but also some disadvantages.

Grants another action, Atk/Spd/Def/Res+3, and the "unit can move to a space adjacent to any ally within 2 spaces" status to adjacent ally with the highest HP for 1 turn.

(Allies with Sing or Dance can be granted this effect as well. If multiple units meet the conditions, effect will not trigger.)

(Duo Skills can be used once per map by tapping the Duo button. Duo Skills cannot be used by units deployed using Pair Up.)