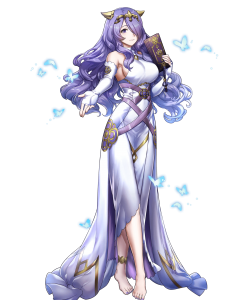 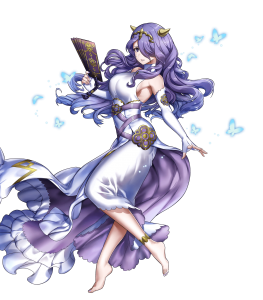 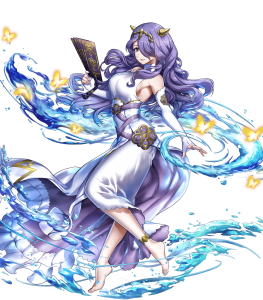 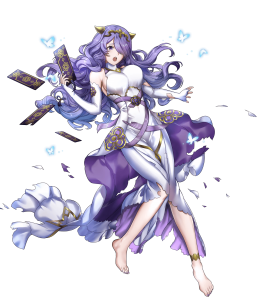 Adrift Camilla manages to set herself apart to some degree despite the weaknesses of her class typing thanks to her exclusive Book of Dreams, which inflicts -5 Attack/Speed/Resistance to the closest foe within five spaces and all foes within two spaces of them in addition to inflicting an additional -4 penalty to the foe’s stats when she initiates or is within two spaces of an ally. The weapon also gives her an extra +5 Attack and Speed when initiated and true damage equal to 15% of her Attack, making her a capable offensive mage despite her class type.

While Adrift Camilla possesses a decent exclusive weapon, she still suffers greatly due to her class type. Ranged Fliers suffer from two key issues: lack of skill access (especially B slot skills) and a crippling weakness to Bows. Adrift Camilla gets very little in return for these weaknesses besides gimmicky movement-based B slots such as Aerobatics, leaving her far less effective in comparison to other player phase mages blessed with a better movement type (Ie: Infantry).

Camilla’s base 17 Defense and 36 HP mean that she will fold very easily to physical foes, so she must take great care to avoid physical damage in general.

Adrift Camilla is a unit that requires support from her team, either by being close to them or by having others grant her buffs, due to this, I'm kinda surprised no one tried to run her with wings of mercy, since there's so many ways to trigger it and strategies that revolve around having low health have so much support skills.

Due to her being able to teleport to a tile adjacent to a unit that has 50% or less health, she can be safe while units get hurt, and then nuke the enemy unit thanks to Book of dreams omnidebuff -4 and help from Atk/Res bond 7 and atk/res rein 3. No unit will be able to survive a hit from that.

Also, since her ability allows her to remain close to her allies, blue flame would make for a great special, since it would give her 25 true damage, but usually, her role doesn't need much of that, so, Glimmer would make for a great special too, as it would charge faster, specially with help from Pent. And in general, any rally would help her, but Rally atk/spd allows the unit she supports a lot of one shot capabilities

This build focuses on boosting Adrift Camilla's Attack, Speed, and Resistance while lowering those of our foes thanks to Chill Spd/Res 2 and the effects provided by Book of Dreams.

Bond Skills (A and Seal) are important since they provide a significant boost both on player and enemy phase and synergize well with Camilla's native weapon. The only requirement being that the unit must be adjacent to an ally.

Chill Spd/Res 2 further helps Camilla double her opponents, while also hitting harder (which is interesting given her Attack is one of her most prominent stats). This one is especially useful against opponents that are both bulky and speedy and would be hard to take on otherwise.

Since we should be next to an ally for most of the battle, abilities like Atk/Spd Oath 3 prove to be quite useful, boosting her Attack and Speed even further.
However, this slot can also be used for skills like Odd/Even Atk Wave 3, Atk/Spd Rein 3, Atk/Res Rein 3, or even Flier Guidance (or any other movement-oriented skill for fliers) depending on the team needs and composition.

Adrift Camilla has strong initial skills, so it can be operated with only the Sacred Seal and Special Skill needing to be edited.

In particular, the A-Skill is engaged with her Special Weapon and is a powerful skill without requiring inheritance. The Special Skill is as you can use "Draconic Aura", which adds high attack, to give more attack power.

In the case of the operation of Fliers, the Sacred Seal will be used as "Flier Formation", and when mixing teams, "Guidance" could be used.

Another flying mage camilla with sky high attack, this time with magical bulk instead of physical bulk that spring camilla has. She is another unit that benefits greatly from having an ally next to her at all times, granting her an additional 9 atk, 4 spd, 4 def, and 9 res already, not including any bonus from atk/res link yet. Blue flame benefits from the adjacent ally just like the rest of her skills and has a low cooldown with high arena scoring capabilities.

Adrift Camilla is best known for her attack, so running a set where the enemy’s resistance weaker could potentially help her one-shot enemies. Her Draw Back skill could be used to have a unit that could help her not take any blows from enemies that attack using physical weapons. As long as you have an unit/ally next to her, her Atk/Res Bond will help her with taking down enemies. You could also use Iote’s shield as a Seal or A Skill, but this is only needed if you’re afraid of bows one-shotting her.