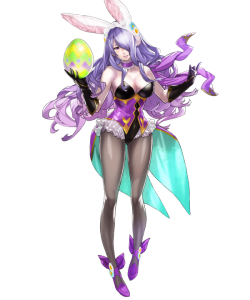 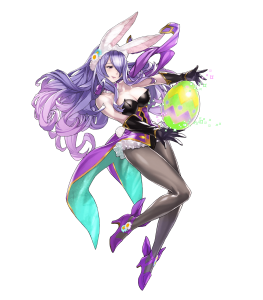 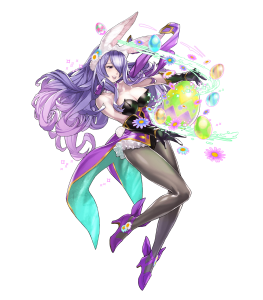 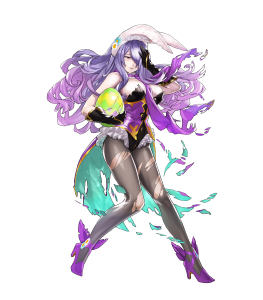 Spring Camilla is not particularly vulnerable to getting poor IVs- just about anything will work on her.

Blades in the Easter Eggs (Gronnblade +)

Gronnblade+ Camilla can essentially be run two separate ways: you can try to salvage her Speed, or you can try to maximize her Attack. With a Speed boon, Life and Death, Hone Fliers buff, and Spd +3 seal, Camilla will reach 43 Speed on both player and enemy phase, which can be further increased to 47 by running her with Goad Fliers teammate.  This means that she can be run similarly to Nino in that she can have high-damage doubling capabilities. Unlike Nino, Camilla suffers from poor Resistance, meaning that she'll have difficulty doubling mages without dying, particularly with a bane.

Alternatively, a +ATK, Attack seal, and Death Blow set means that Camilla will hit 60 attack on initiation, before any buffs. With full flier buffs included, Camilla will hit for a staggering 90 green magic damage, without factoring in things like unit support, goad fliers, or special proc. This makes her terrifying as a unit capable of oneshotting many other units.

Her B slot should be Desperation if you're building her out to be a speed demon- otherwise, it's a little more flexible. You can go for G Tomebreaker if you're concerned about high Resistance green mages such as Julia or Sonya, otherwise Vantage will help her out if she needs to bait units, particularly if you opt for Close Counter instead- this way, you can use your Blade Camilla on enemy phase, by luring out unsuspecting Lance and Axe units to attack into her high defenses and eliminating them with a massive blast of green magic.

With the 2.0 update buffing Glimmer down to 2 ticks, it becomes ideal for Camilla to increase her already staggering attack potential. The cooldown addition to her blade tome puts it at 3 ticks, which is perfectly manageable if you need to build it up for a massive attack- though you'll rarely need to.

While the introduction of Myrrh and Female Grima means that Spring Camilla's niche in being flier emblem's bow counter is mitigated, it doesn't invalidate the utility of the build.  This set allows her- unbuffed at no merges- to tank and counter kill an optimally-built +10 Reinhardt and +10 Lyn... in the same enemy phase. Gronnraven allows Camilla to function as if she has WTA against colorless, meaning that when combined with Triangle Adept, gives her a large damage reduction and increases her damage done where arrows are concerned.  This isn't just an anti-Reinhardt/BLyn set either: with this set, Camilla can kill most archers she comes across, as well as solidify her defenses against powerful blue mages that were once a threat to her.

Moonbow is required to kill Reinhardt and Brave Bow users, as she will proc it upon her first retaliation and typically oneshot her attacker. Bonfire can be run with more damage, but you run the risk of failing to ORKO and allowing the enemy unit to be danced or repositioned away.

Vantage is the ideal B slot if your primary focus is taking down baddies in Enemy Phase. After being attacked by any of her meta counters, Camilla will dispatch them and then be within range for a Vantage proc. Her high attack means that she'll be able to take down multiple enemy units in enemy phase with this, and if she has a Hone Attack, Goad Fliers, or Hone Fliers buff, she'll be able to eliminate a +10 Reinhardt / Brave Lyn combo in the same turn without dying.

She is capable of surviving without Distant Defense, however the margins for her survival there are more narrow, and it's good for insurance. She can work with another seal if your team is already using the DD seal.

With the Weapon Forge in 2.0 comes a buff to Green Egg+, and with it, Camilla's ability as a generalist has increased immensely. Her ability to recover HP after every combat means that she can effectively run Fury while severely mitigating the HP penalty (losing -2 HP per round of combat).  In addition, her Egg can be forged to increase one of her stats. When combined with a +SPD IV, +SPD forge, +SPD seal and Fury, her speed stat can reach 37 before any kind of buffs (43 spd with a flier buff), making her far more capable of dueling units who could counter her.

An alternative to Fury is Iote's Shield, which can be used in place of her Gronnraven+TA build to allow her to similarly tank arrows with her large Defense stat and retaliate with a green magic blast.  If running Iote's then a +DEF IV, Distant Defense Seal, or +DEF forge on her Egg would be helpful, though all three might be overkill.

Her B slot is also variable, depending on what you want her to counter. G Tomebreaker helps her to be a more rounded unit, eking out wins against units like Cecilia and Julia, however B Tomebreaker is necessary if you want her to double units like Linde, Lute, or other high-speed blue mages.  Wings of Mercy is another option that allows her to function more as team support: she can use Reciprocal Aid to heal her teammate or blast away at whichever damaged them with her Green Egg.

Like other slots, her Sacred Seal can be alternated as well to best suit your preferences: this Camilla is versatile and can be very flexible to fill many teams depending on what kind of unit you need. She's also relatively budget-friendly, as all of her skills can be found on 3 star units and her highest cost investment would be forging her egg.

Camilla was the first of a new unit type to be introduced into Fire Emblem Heroes, and as a green tome user, her viability was a little shaky in the first few months of her release.  While she sports spectacular Attack and Defense, her Speed and Resistance were severely lacking and so her initial niche was for one-shot nuking with Gronnblade. With Hone and Fortify flier buffs equipped, she could do quite a bit of damage, though she would rarely have the capability to double any enemy units. With a low Resistance stat, Camilla also lacks the bulk to take many mage fights, and without certain skills it's relatively simple for even blue mages to kill her.

All of this has left her in a rather odd position, however, in the rise of Cavalry meta with Reinhardt and Brave Lyn as their key players, Spring Camilla suddenly fell into her place as flier emblem's most valued anti-meta unit. Spring Camilla is capable of tanking arrows and retaliating harshly. This alone makes her an incredibly valuable unit to field with flier support, made only more impressive by the fact that she can also handle Reinhardt without breaking a sweat. If you're having trouble against cavalry in the arena, fielding Spring Camilla will help immensely.

Still, don't let that fool you into thinking that she's the answer to all of your problems. Her low Speed makes her difficult to effectively use on player phase, while her low Resistance can make her a liability on enemy phase. She needs to be run a very specific way in order to survive the meta, and you basically have to choose between making her an offensive powerhouse or making her a defensive tank.

Spring Camilla has very high attack- the highest among all mage fliers- and she can utilize this in addition to tomes like Gronnblade to take her oneshot damage potential to incredible heights.

She is also capable of retaliating and OHKOing enemy units, even with her default tome or Gronnraven.

Camilla can be built with Gronnraven to tank arrows easily, making her incredibly valuable to her fellow fliers.

Camilla has great maneuverability on all maps, which allows her to attack opponents from safety over water and mountains.

Finally, as a flier, Camilla can support her mixed-emblem teammates uniquely through skills like Guidance or Tactics skills.

At 25 base speed, she will almost never double enemies on player phase unless she's +spd and heavily supported by her team

She risks being doubled often or even quadded by brave bow archers, making her deceptively fragile

Camilla has difficulty dueling other mages, particularly high speed mages. This means that even blue mages will sometimes kill her.

Dragons are a constant threat, and even Nowi can hurt Camilla significantly.

Spring Camilla is a limited unit, meaning getting merges outside of her specific availabilities is impossible. She is very difficult to obtain because of this.

She requires a full base kit rehaul for either of her optimal builds. Although she doesn't generally require any 5 star exclusive skill to shine, she still needs plenty of SI.

She requires team buffs to be fully effective and will score lower than her melee allies in the Arena.

This is a Close Killer build for Spring Camilla. Attack-refined Madness Flask+, Close Foil, and Fierce Stance 3 for extra Attack and Defense. Threat. Atk/Res 3 increases Camilla's Attack and Resistance, and decreases the foe's. Bonfire is the Special to use; Camilla's Defense is her higher defensive stat. Dull Ranged helps Camilla face foes with bows and stuff by neutralizing their bonuses.

Camilla was actually one of the first units I ever summoned 5 star, and I still use her often. This build is really not fair and covers up her speed troubles very well, especially with flier buffs. The other build I use is Close Counter, Vantage, Iote's Shield. Both are really good.

This build heavily relies on her allies being by her side to maximize her defense, you could also swap out Atk/Def 2 for Iote’s Shield for that added tankiness.

With a Defense boon, Camilla hits a respectable 33 Defense, boosted to 36 by Fury and 39 by refining her egg, allowing her to function as a solid physical tank. Fortify Fliers can be swapped out for any appropriate C skill for the team she is on, although Threaten Atk deserves mention for helping her take more hits. G Tomebreaker is necessary if she wants to beat other green tomes in a one-on-one duel, as she is not very fast.

With this combination of skills, Camilla will be able to self-buff her atk every other turn allowing her to have a more impactful blade. Once She is in vantage range, as well as under Odd Atk Wave buffs she will be able to easily bait in kill units. Vantage also serves as a way to deal with enemy vantage user that you were unable to one round or cannot live the atk from them. 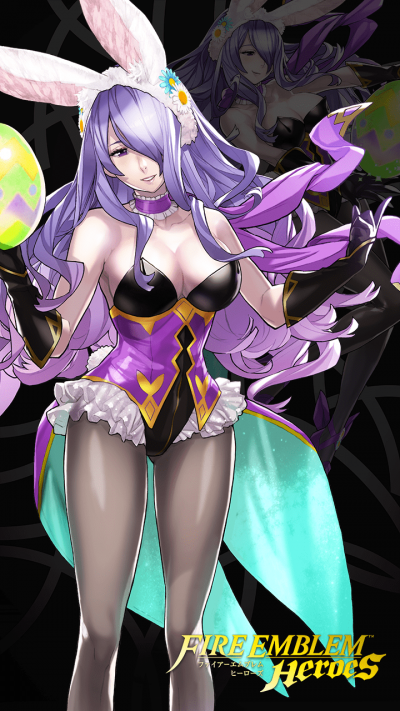 Ideas for a Mythic Hero
Medeus: Shadow Dragon Leader of the fallen Earth Dragons, and ruler of Dolhr. A cruel…
Well you're not Jill (what should I do?)
Screenshot_2020-09-18-16-13-09-865_com.nintendo.zaba1080×2340 1.26 MB I’m glad I got…
Your Hopes for Halloween
I would like to see either Boyd or some Tellius Dragons. The dragons mainly because…
Brave hector with M Corrin AR light tank
Just got around to theory crafting hector after his refine. Can’t decide if he’s…
Help with team build
Ok originally I posted this to the wrong game board somehow so I’m just copy/pasting…
Read More