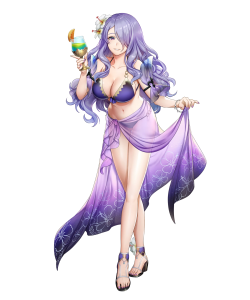 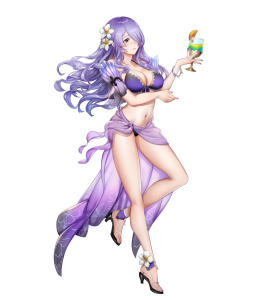 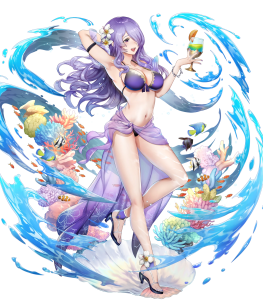 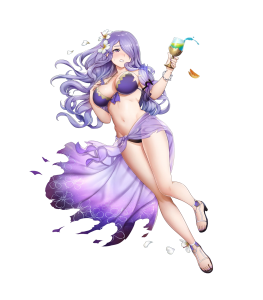 As with most Blade tome users, Speed is Camilla’s most important stat. This makes a boon in it the choice nature in order to maximize her damage output by securing additional follow-up attacks. A boon in Attack also makes for a suitable choice, as it increases her raw damage output. This makes it a more effective choice against slower bulkier opponents. In particular, this can potentially be the deciding factor in her matchup against Fallen Male Robin.

For her Assist, Ardent Sacrifice has great synergy with Desperation. Camilla’s lacking overall bulk can make her susceptible to getting killed in only one hit by both physical and magical damage. By dropping her HP without the need to engage in combat, she can safely get into Desperation’s 75% HP threshold. Otherwise, any choice of movement skill such as Reposition will make for a suitable Assist.

Glimmer is a great choice of Special on any Blade tome user, as it scales with the additional damage received from Hone/Fortify buffs and activates within a reasonable timeframe despite the cooldown penalty tied to Blade tomes. Alternatively, Moonbow can be used as a more effective option against opponents with high Resistance such as Lute and Female Morgan.

Moving on to main skills, Swift Sparrow makes for a premium choice of A skill by providing a strong boost to Camilla’s offensive stats on initiation without losing anything else.  A higher risk higher reward option is Life and Death, boosting her offensive stats even higher at the cost of severely damaging her overall bulk. This makes her even more susceptible to getting OHKO’d by both physical and magic damage alike. Finally, Fury makes for another solid choice by making it easier to get into Desperation range as well as increasing her overall bulk at the cost of a marginally weaker offense.

Desperation is the key to any glass cannon mage; once in the HP range, Camilla will be able to safely double her opponent without the risk of getting killed on the counterattack. Hone Fliers is a great C skill option, as it allows Camilla to be a benefactor on a flier-centric team where she is most effective on. Guidance makes for another great choice on mixed team compositions by providing movement support to both infantry and armored teammates. Otherwise, the C slot can be replaced as needed to suit the team.

Last but not least, Camilla has several options for Sacred Seals. If she isn’t already utilizing Guidance in her C slot, it can also be run in the Sacred Seal slot. Heavy Blade is another option with a consistent activation thanks to the damage scaling property of Blade tomes. This allows Camilla to activate her Special more frequently. Finally, both Speed +3 and Attack +3 make for good picks in order to give Camilla a solid offensive stat boost.

The Juice is Loose (Offensive/Support)

In exchange for the sheer offensive power of a Blade tome, his build looks to give Camilla an additional role as a strong support unit by making use of her native weapon, Juicy Wave. Overall, this set bears many similarities to a purely offensive one with a few notable changes. Without the damage-scaling property of a Blade tome, Camilla prefers Specials that scale with her opponent’s Resistance such as Moonbow or Luna.

Having Desperation built into her weapon, Camilla has the freedom to run other skills in her B slot such as Chills. Both Chill Spd and Chill Res make for great choices by increasing both Camilla’s damage output as well as the overall support she can provide to her team. While Chill Res can massively increase magic damage against the affected target, it is not always consistent. This is due to it targeting the unit with the highest Resistance and not necessarily the unit with the highest magic bulk.

Class-exclusive buffs such as Hone Fliers remains coveted when running Camilla alongside other fliers. By combining this with the Flier Formation Sacred Seal for more ease of movement, Camilla can serve as a flexible support and combatant on a flier-centric team. On a mixed team composition, Camilla can instead run Guidance in order to give her allies better mobility. This can be combined with one’s choice of Tactic to also provide a solid stat boost.

Camilla finally finishes the Weapon Triangle with her fourth iteration as a blue mage flier.

Statwise, Camilla sports all the makings of a strong offensive mage. With 33 Attack and 36 Speed at base, Camilla excels at taking out her opponents in a single round of combat. In particular, she makes for a phenomenal Blade tome user. By retaining her flier status, not only does she have an innate advantage when it comes to mobility, Camilla also has access to powerful class-exclusive buffs such as Hone Fliers.

Camilla’s weakness is her poor overall bulk of 62 physical and 59 magical. While she generally can take at least one hit from opponents that don’t have the Weapon Triangle advantage over her, by no means is she able to survive continuous combat without relying on Desperation in order to avoid counterattacks.

Regardless, Camilla holds all the traits of a strong glass cannon. Her well-distributed statline, superior mobility, and access to class-exclusive buffs make her one of the strongest offensive mages around.

Although Camilla is by no means a tank, she has just enough physical and magical bulk to survive at least one counterattack from most non-green opponents.

In addition to her superior mobility, Camilla has access to class-exclusive buffs such as Hone Fliers.

Camilla’s status as a flier comes with its disadvantages. Her innate weakness to bows coupled with her lacking physical bulk makes her a prime target for archers.

A normal blade tome build except with Life and Death and Chill Res instead of Fury + Desperation. Luna and Heavy Blade is to take cars of some of the more resistant units. Not sure how effective it will turn out but I'm testing it.

Luckily for her high HP, she won't be one shot due to her low def and res. This allows Close Counter to be useful in her build. Desperation is to make sure she attacks any close targets before they attack her, and sometimes even saving her. Blarblade+ helps enhance her ability to throw out strong attacks from a distance. Bow units will destroy her, so Iote's shield is almost a requirement for her. She will often double her enemies, so having a even with a -1 to special debuff from Blarblade+, Aether will still kick in fairly quickly.

IVs: +HP/-Res
Pretty default boring Bladetome build. With this IV spread, Summer Camilla is almost neutral, as it's the best Bane and OK Boon. Despite not having a boon in attack or speed, Summer Camilla still is a very offensive oriented unit.

Weapon: Blárblade+. With Emblem buffs, a bladetome can hit extremely hard.
Assist: Ardent Sacrifice. Works really well with her B slot skill, Desperation.
Special: Glimmer. With Bladetome adding 1 more turn to the activation of her special, she calls for a low cooldown special. Moonbow works fine too.
A slot: Swift Sparrow 2. Without any buff, Summer Camilla hits 50 attack and 43 speed by herself, when initiating.
B slot: Desperation 3. Works really well with her HP pool (despite HP boon) and Ardent Sacrifice.
C slot: Hone Fliers. All her flier friends appreciate the buffs.
Seal: Speed +3. The more speed the better.

This is a standard Camilla, she's pretty much running her base kit except for Smite and Iote's Shield. Smite gives more mixup of movement options in Flier Emblem and Iote's Shield helps her kill archers. Blarraven is also good to run on an anti-archer Camilla as well.

(IVs are from my Camilla +Spd, -Hp all skills and weapons included)
Camilla comes in her 4th alt in this summer banner as a Flying Blue Mage, like her little sister's summer alt. Competing against her and F! Morgan for the Blue Mage Flier spot, what does she have different from the other mages?
1. With 33/36 Atk and Spd, Camilla now holds the best offensive Stat Spread for a Blue Flier Mage, Beating Corrin in both Atk and Spd by 2, and Morgan by 6 Spd. These Offenses make her the best Blarblade user out of the 3 in a Flier Emblem team.
2. Juicy Wave+ comes with Desperation 3 built in, which out the box synergizes with her 36 Spd and Bad Defense and Resistance quite nicely and frees up the B-Slot for another Skill such as her default Flier Formation; allows her to do unique combos with Desperation and another powerful B-Slot Skill. It's a great Weapon considering her stats, and it can also be refined as well for other stats.( a +Spd Camilla can reach 41 SPD with the refined Juicy Wave alone.)
3. Out of the box has the best default skill set out of the 3. Juicy Wave+ is great on her and can also be refined, Draconic Aura is a decent budget option. Death Blow is a good Budget option, and Flier Formation and the extremely rare Hone Fliers allow her to synergize right out of the box in Flier Emblem. Just an Assist Skill and few tweeks in the A-Slot and Special and Camilla is good to go.
Now with Camilla, there are currently 3 Blue Mage Fliers, and somehow all 3 can play a different role. Camilla clearly has the best Offense of them, Morgan is the best Magical Tank, and Corrin is a jack of all trades that can fufill most roles your team needs with the right skill. Camilla certainly is an offensive presence to look out for whether it's with Blarblade or her own tome Juicy Wave. Definitely do not sleep on her if you do get her, you can never have enough Mage Fliers.