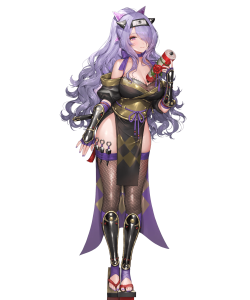 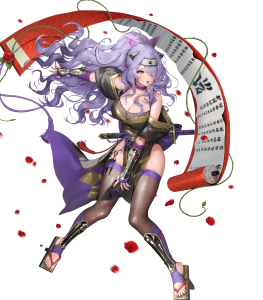 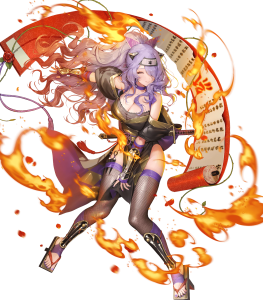 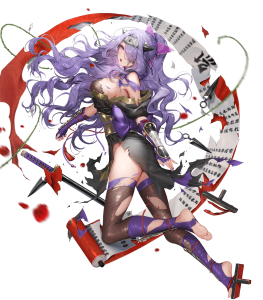 Camilla’s Flowery Scroll comes with a variety of effects that make her a fantastic unit. In addition to the Slaying effect, reducing her Special cooldown count by 1, it also boosts her Def and Res by 5 at the cost of reducing her Spd by 8, allows her to strike twice when attacking in either player or enemy phase, and allows her to counterattack before her foe attacks if her Res exceeds theirs. These effects make her relatively strong on player phase and an incredible Vantage sweeper on enemy phase solely on the strengths of the weapon.

Camilla’s base 43 Atk allows her to deal great damage, and her base 40 Res allows her to beat the Res of most foes that attack her, allowing her to counterattack first unless they are using an effect that disables the priority like Hardy Bearing or disables her counterattack like Watersweep.

Camilla’s status as a red tome flier allows her to use good skills like Atk/Res Catch 4, Seal Res 4, and Atk/Res Hold.

Camilla’s base 38 HP and 32 Def are not extraordinary, but allow her to take one hit from most physical units other than bows.

Camilla’s base 19 Spd, further reduced to 11 by Flowery Scroll, is terrible. While this isn’t an issue if she KOs her foe when striking twice, it means she is vulnerable to follow-ups. In addition, it means that enemy units can very easily deny her counterattacks with the Watersweep skill, and when attacking on player phase, Camilla has no reliable way to follow-up attack.

Bows and other flying-effective weapons deal bonus damage against Camilla, and she may fall to a single attack from them.