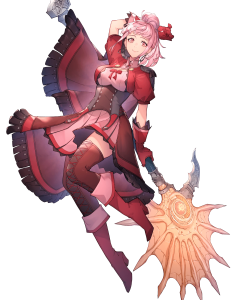 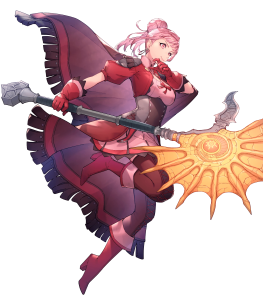 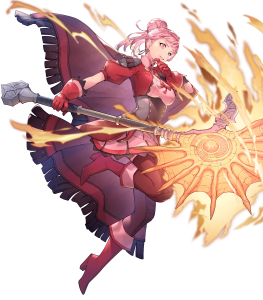 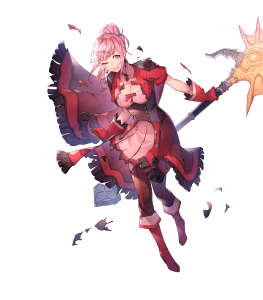 what part of “delicate flower” do you not understand? (Defensive Focus / Melee Specialist)

Ascended Hilda’s baseline Atk/Spd of 42/43 is pretty standard fare for modern offense-oriented Heroes, but it’s still very much impressive and easily facilitates strong firepower and practical durability by avoiding follow-up attacks — especially considering her ability to potentially wield both of her four-point Assets in these stats without needing a Floret per her Ascended status.

However, Hilda’s sheer damage output becomes highlighted further through the selfish benefits of Fuming Freikugel: a Spd-based version of Brave Eirika’s Moonlight Bangle, with which she gains unlimited access to bonus damage on each Special activation based on its cooldown. Even the lowest cooldown options available like Moonbow still grant supplemental damage equal to 30% of her Spd — which, through her weapon alone, ensures a minimum of spammable +15 damage that moreover cannot be reduced, regardless of enemy defenses.

This boost only has room to grow higher through varying Special options, skills, outside support, and merges, all of which lead to Hilda’s sheer burst potential potentially quite insane. Her performance isn’t quite as explosive as Hatari Karla (whose Dryblade Lance carries a similar effect) as Hilda is more support-dependent and can’t couple her true damage with AoE Specials, but she compensates in other ways…

…Specifically, Ascended Hilda proves rather unique through her ability to feature such striking damage output while simultaneously carrying actual utility: a neatly packaged Spectrum +3 and 20% damage reduction to allies within two spaces. These buffs aren’t overwhelmingly powerful on their own by any means, but they work in Hilda’s favor for two primary reasons:

It’s also worth mentioning that despite Hilda’s hyper-offensive lean (especially in Fuming Freikugel’s true damage mechanic), she actually proves surprisingly tough in taking hits. Her effective physical and magical bulk totals out to 76/68, which isn’t terrible on its own — however, it becomes better once you account for Freikugel’s 40% damage reduction on her foe’s first attack, and her high Spd and Null Follow-Up access to ensure the second strike doesn’t land.

Last, but certainly not least, all of the many points brought up above are underscored by the plentiful skill access enabled by Hilda’s infantry status. Her default Velocity and the Tempo line of abilities are especially noteworthy in her case as it makes her Special activations even more deadly by preventing them from stopping, though natural mention goes to Null Follow-Up, Spd/Def Bulwark, and Special Spiral among others in helping expand her playstyle options.

Although her practical bulk isn’t bad, the fact that her initial Res value starts at a base 26 makes it difficult for Hilda to continuously engage in combat against magic foes in extended rounds of combat; the absence of a Far Save ally to handle these threats, dragons aside, makes it much more difficult for her to operate during the Enemy Phase if left in range. Additionally, regardless of enemy type, Fuming Freikugel’s 40% damage reduction isn’t infallible and spells trouble against enemies wielding reduction-nullification effects like Legendary Nanna’s Lands Sword or Brave effects.

The same that could be said of her base version also applies here to Ascended Hilda in that while the hybrid nature of Fuming Freikugel presents an interesting concept, having this split comes at the cost of Hilda’s performance — in both offensive and supportive applications — falling shy from the best of her class.

For instance, while her damage output is undeniably fantastic, the inclusion of her 20% damage reduction and Spectrum +3 to nearby allies prevented access to other useful selfish effects she would have greatly appreciated to boost her standing. Something like partial Null Follow-Up, Guard nullification, bonus Special charge manipulation, or even the AoE Special synergy of Hatari Karla built into her weapon instead would have pushed her from great to an undeniable powerhouse. The same applies to the resources invested into Freikugel’s supportive capacity — but, again, there’s no denying that there is ultimately merit in her flexibility.