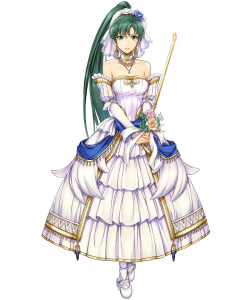 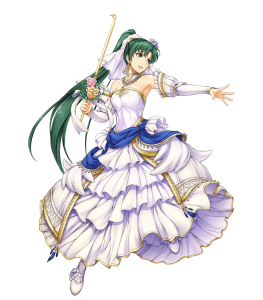 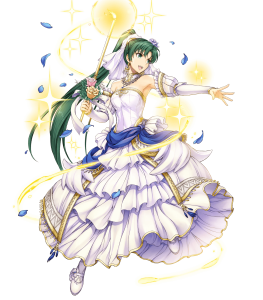 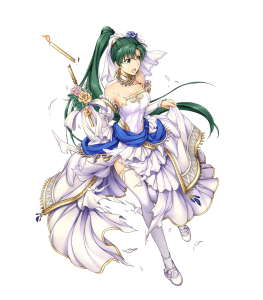 If one wants to use Bridal Lyn in any offensive form at all, an Attack boon is the ideal choice. Speed is a decent boon as well since it will allow Lyn to avoid more double attacks and increase her overall survivability.

Resistance is the preferred bane, as a Defense bane will reduce her Defense threshold to 59 damage, opening up the possibility of her being OHKO’d by strong melee units. A Defense bane is still Lyn's second best bane, however, and can be used to good effect as well. An HP bane will reduce her HP by 4, so it is preferred to keep that neutral if possible. Lyn does not want to take a bane in either Attack or Speed.

This very flexible set will allow Lyn to perform healing duties while also being capable of crippling the enemy team.

With the way healing Assist skills now work, Lyn does not want to lower her Attack even if she is used as a dedicated healer, as this will lower the amount of HP she will be healing her teammates for. Rehabilitate+ is not as consistently powerful a healing skill as Physic+ or Recover+, so it is preferred to take one of those skills instead if possible. This is not a necessary requirement, however, as Rehabilitate+ will work fine if that is all one has access to. Restore+ is another interesting situational healing skill that can come in handy, although it is by no means necessary to have.

The choice of weapon is very flexible, and ultimately it will not make much difference at all to how Lyn will be played. Pain+ will deal incredible amounts of chip damage coupled with Savage Blow. Fear+ can be used to debuff the enemy team’s Attack. Lyn’s default Candlelight+ can be used to good effect too, although it’s effect is a little bit more niche. Gravity+ is great for taking control of the enemy team’s movement and keeping the battle at a slower pace. The choice of weapon is dependent on what one desires from Lyn as a support unit as well as one’s resources, but ultimately the playstyle of this build will be very similar regardless of what weapon is used.

Lyn can run Miracle to improve her chances of surviving in the event she should suffer a fatal blow, but Miracle is a 5 cooldown Special and may not be available when needed. A Balm skill such as Swift-Winds Balm will help her teammates more overall.

For Lyn's A Slot, Atk/Spd Solo is an excellent choice. It will significantly increase Lyn's Attack as well as her potential to double enemies, and the skill does not have a difficult positioning requirement to meet as this build should be played offensively anyways (e.g. generally not next to teammates when initiating). Attack +3 is another decent option. This will slightly increase the amount of HP she heals with her Assist skill as well as increase her damage output. Speed +3 can be used to avoid double attacks, but in general 37 Speed still won’t be enough for Lyn to double many enemies without buffs, and ideally, Lyn should avoid getting attacked with this build altogether.

Dazzling Staff is an excellent B skill and should be not be replaced as Lyn can refine her weapon with the Wrathful effect, allowing her to deal normal damage and not worry about enemy retaliation.

No matter the choice of weapon, Savage Blow is a great choice for a C slot as it will have the same area of effect as whatever refined weapon Lyn is using (except for Gravity+, which has an area of effect of only 1 space).

The choice of seal is dependent on user preference. However, the Savage Blow seal combined with the Savage Blow C skill and Pain+ will allow Lyn to deal a whopping 24 chip damage to all enemy units within 2 spaces of the target on initiation. Attack +3 can be taken for more consistent damage and increased healing powers as well. Speed +3 is a great option as well for survivability. A simple buffing skill, such as Hone Spd, will work great for Lyn too, especially if combined with a buffing C skill.

For those who are willing to put everything on the line for their waifu incarnation of Lyn.

This extremely expensive build aims to make Bridal Lyn capable of being an offensive unit who can function as a dueler in battle. An Attack boon is necessary as every point of Attack is significant. As the fastest staff unit in the game tied only with Maria, Lyn has the advantage of being able to avoid doubles more easily at the cost of decreased Attack.

Absorb+ is taken for Lyn to heal herself by 50% of the damage dealt by her with every hit. Combined with the rest of her kit, she can become difficult to knock out. Pain+ is another solid option that synergizes very well with Vantage if Lyn is within Vantage range. Lyn will be able to deal massive chip damage and then often kill the enemy on retaliation by proccing Vantage.

Martyr+ is the recommended Assist skill as it will allow Lyn to heal herself in addition to her allies. Martyr also isn’t dependent on how much HP she heals her teammates for; Martyr will always heal Lyn for half of her suffered damage.

Miracle is another added layer of security, allowing Lyn to suffer an otherwise fatal blow. Keep in mind Miracle will not proc if Lyn is already at 1 HP, which is why Absorb+ and Martyr+ are recommended to bring her HP back up once Miracle procs.

Close Counter is the desired A skill as this will allow Lyn to counterattack every unit that dares to attack her. If Close Counter is not available, a simple Attack boosting skill can be taken instead, but this greatly hinders Lyn by allowing her to only retaliate against ranged units. This can work depending on one's team structure, but overall, Close Counter is greatly preferred.

For the B skill, Quick Riposte guarantees that Lyn will get 2 hits into every unit that attacks her. This synergizes well with Close Counter, as no unit will be safe from her retaliation. Vantage is an acceptable option as well, especially if one would like to run the Quick Riposte seal.

The C skill is not as incredibly important as the other skills, but Threaten Res is good for general damage while Savage Blow is great for chip damage. Breath of Life might be worth considering too as it synergizes well with the secondary effect of Absorb+, allowing Lyn to heal all allies within 2 spaces of her by 14 HP when she initiates an attack.

Generally, Lyn will want to run Close Defense as a seal to improve her survivability against melee units. Distant Defense is a solid choice too as it provides the same effect but in the form of ranged attacks. If Vantage is taken as the B skill, then the Quick Riposte seal will be a good option as well. However, the increased bulk from one of the defensive seals is generally preferred to help compensate for Lyn’s low bulk.

Bridal Lyn is a staff unit that shares the same characteristics of most healers: Low BST, low Attack, and mediocre defenses. However, after the weapon refinery update that opened up new options for staff weapons, Lyn’s potential has greatly improved to allow her to become a very decent unit and support in combat.

What sets Lyn apart from other healers is her high Speed; she shares one of the highest Speed among all staff units, tied with Maria and Nanna at 34. Lyn is usually capable of surviving a single hit in combat, and thanks to her good Speed, she usually won’t be one round KO’d as long as she is not being hit twice.

Due to being an infantry unit, Lyn doesn’t have access to cavalry-based buffs like Hone Cavalry or Fortify Cavalry like Elise does. However, with the recent changes in Arena to include maps that punish cavalry based teams by restricting their movement via special tiles, an infantry healer can definitely function fairly well.

Overall Bridal Lyn is a very decent healer that can find a place in almost any team. Keep her out of harm’s way, and one should find her quite satisfactory.

At 34 Speed, she is tied with Maria and Nanna for being the second fastest staff unit in the game. This greatly helps with her survivability despite her mediocre defenses, as she will be able to avoid double attacks from a considerable amount of enemies.

Despite not having the 3 movement of a cavalry unit, Lyn is not limited by trenches and can pass through forest tiles, both of which have become more prominent in Arena.

Bridal Lyn comes with Dazzling Staff, a very potent B skill. With a Wrathful upgrade on her weapon of choice, she can run the infamous “Razzle Dazzle” combo with limited skill inheritance.

As with all healers, Bridal Lyn suffers from a low BST, significantly hindering one’s Arena score.

A weakness that definitely cannot be overlooked is the fact that Bridal Lyn is a limited 5* locked unit, making her much more difficult to acquire and merge. As of now, the only chance of getting Bridal Lyn is on a legendary banner that she is featured in. This significantly hinders her viability in Arena, and only extremely dedicated (or lucky) players will be able to overcome this. 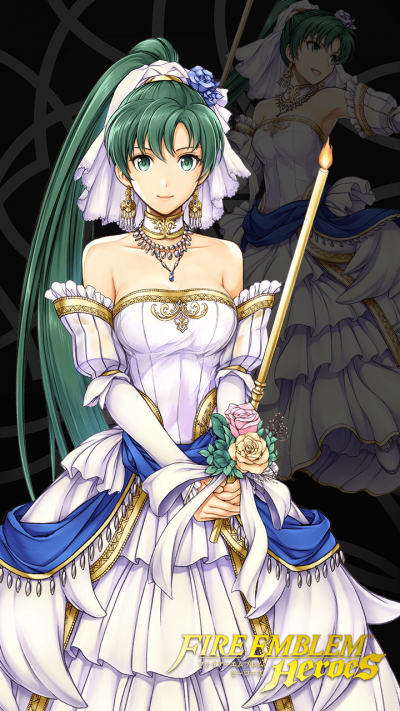