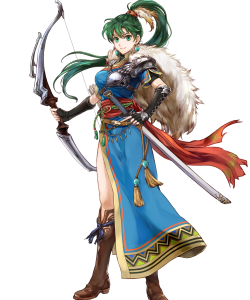 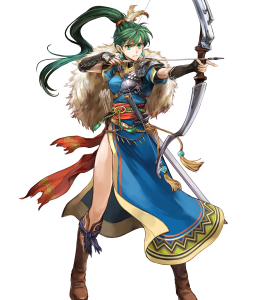 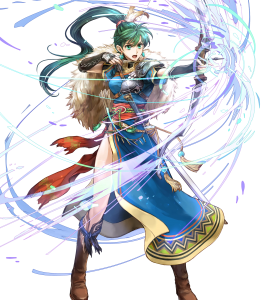 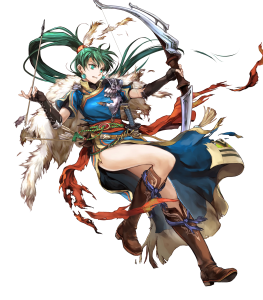 Can you shoot with all the Colors of the Wind? (Offensive)

Legendary Lyn was the introductory hero to the whimsical world of colored archers and it is still as questionable of a concept today compared to when she first hit the scene. Colored archers are essentially physical damage dealing mages and while Legendary Lyn finds herself being able to utilize her solid damage against physically frail blue units, this comes at the price of weakening her performance against high Defense red units. Colored physical ranged units are already extremely hit or miss and Legendary Lyn is no exception to this rule. She finds herself missing more often than she hits, despite her claims of hitting her mark.

Swift Mulagir is Legendary Lyn’s claim to fame, granting her a large +5 boost to Attack and Speed so long as the number of allies near her during combat exceeds the number of enemies near her. This makes her have wonderful synergy with support that loves to keep close behind their front line, such as Drive users. This weapon has the benefit of working in both Player and Enemy Phase, meaning that she can take advantage of the offensive boost no matter what role she is trying to cover.

However, we then come to Legendary Lyn’s exclusive A Passive which has gotten her the laughs of many players alike: Laws of Sacae. Laws of Sacae triggers a +4 boost to Attack/Speed/Defense/Resistance so long as there are at least two allies near Legendary Lyn during combat. This seems to be quite the promising skill until you realize that the skill only works in Enemy Phase. This makes Laws of Sacae have missed potential, as Legendary Lyn could have proven to be quite the potent dual phase archer in the right circumstances with both her exclusive weapon and A Passive. Even if dragging a heavy merged one to arena to make use of the Wind Blessing, she is better off running G Infantry Duel for scoring purposes.

Legendary Lyn could just be the epitome of average to above average as far as her performance goes. She has her flaws as a unit, but she has her strengths as well. Compared to Legendary Lucina who is a fellow colored archer, her unique Laws of Sacae pales in comparison to Legendary Lucina’s Future Vision utility. As such, many will find themselves dropping Laws of Sacae if they plan to use Legendary Lyn on their teams. The Lady of the Wind may be a Legendary Hero, but it is up to those who are willing to play on her strengths to make her Legendary by more than just namesake.

Swift Mulagir is a weapon that can provide Legendary Lyn a strong offensive stat boost while also getting a displayed Resistance boost that can help Ploy skills activate more reliably.

Legendary Lyn’s base 31 Attack is workable and her base 36 Speed is quite good, but these offenses can be boosted further thanks to Swift Mulagir. Even without Swift Mulagir, they are good enough to the point where Firesweep Bow can be justified.

As a Legendary Hero, Legendary Lyn can provide +3 HP and +2 Atk to allies with a Wind Blessing during the Wind seasons, in addition to increasing score for Arena.

Legendary Lyn sports a neutral magical bulk of 63 (66 if equipping Swift Mulagir). This magical bulk allows Legendary Lyn to be potent enough at duelling mages with relative ease. This can further be built on with team support and even Laws of Sacae.

Being a colored archer tends to have more disadvantages than advantages as archer units typically earn their renown for being able to hit nearly every unit other than Raven tome carriers for neutral damage. While being green does allow Legendary Lyn to have an easier time against blue units, it comes at the cost of hurting her potential against red units.

Legendary Lyn’s neutral physical bulk of 57 is much weaker than her magical bulk. Considering a Defense Flaw, this can even be turned into a much weaker 54. With how high physical damage dealers can get their Attack stats, this may result in Legendary Lyn getting defeated immediately by them, especially by physical red units.

Laws of Sacae is Missed Potential

If Laws of Sacae were a dual phase skill just like Swift Mulagir, Legendary Lyn could have had an interesting niche as a team based dual phase archer. However, as it stands Laws of Sacae only finds itself giving the +4 Attack/Speed/Defense/Resistance benefit within Enemy Phase. This makes it more often than not reserved for strictly Enemy Phase skill sets, if chosen to be used at all.

This build is to maximize the offensive potential of legendary lyn, the combo of candlewax and life and death gives an fabulous +8 atk/spd while only reducing her defense and resistance in 2, she will hit hard and get into the range of desperation quickly and assure kills, def smoke is for either a dancer refreshes lyn and attacks again or for team mates to take advantage of that debuff. Sturdy blow is there mostly for more attack in player phase that's all and rally atk+ for a bit of support.
The special is glimmer because she will constantly deal high damage and with this special that damage is intensified even more

Seal: Distant Def or HP/Res2
B alt: Vantage
--
Lyn's kit emphasises ally proximity--and Blue Flame is a shiny new toy that would benefit her greatly due to sheer likelihood that she will be adjacent. While gaining around +7 res from allies is perfectly doable on enemy phase for Iceberg, Blue Flame can allow for player phase procs as well. Her B, C, and Assist are all rather flexible. She shines as a supporter and mage baiter, and can probably take bows and knives on occasion. Ploys, rallies, Spurs, drives, Infantry Rush/Flash, etc... can all work well and she will not have to worry about leaving herself vulnerable after assisting her allies.
Preferred nature would +HP -def as the superboon would allow for her def to be effectively a net gain of 1 if she avoids multiple physical engagements as her spd is high enough that she will not have to worry too much about getting doubled. However, this would interfere with any potential to ploy as 30 is rather low for my liking and 32 with the HP/res seal is at an uncomfortable bare minimum of the threshold.

While at first it may seem as if Lyn has poor defenses, when invested enough in they become pretty good. This set aims to make use of her unique skills in order to turn her into a capable ranged tank. By stacking Swift Mulagir, Laws of Sacae and Distant Defense Lyn is granted +9/9/10/10 to her stats; with a boon in speed and a bane in hp this rounds up to 54/48/31/40, which are good enough to avoid and sometimes procure doubles, while taling little to no damage from blue and green ranged units. If you want her to perform as less of an all rounder and more of a res tank she can take a bane to her defense instead of hp to keep her magical bulk intact.
The rest of her kit can vary without having much influence on her playstyle. For her b slot, Dull Ranged further cements her as a ranged tank, while quick riposte can be taken if her speed doesn’t seem enough to double enemies or if a speed boon wasn’t avaiable. As for her special, moonbow and glimmer work perfectly if she’s not expected to enter combat more than once per battle, bit she can also charge iceberg for use in the player phase or glacies to proc in her next bait.

Basically turning L!Lyn with a potential unfavorable boon into something usable. With Swift Mulagir and a RES boon, she hits 33 RES without merges, enough to Ploy a fair number of non-mage enemies. Ploy choices can vary based on her role and team comp, but the selfish choices for Lyn are definately Spd and Def Ploys. If managing to land the ploys and proc Swift Mulagir effect, Lyn can likely forgo needing Swift Sparrow and opt in for the slightly more accessible Death Blow 3. Glimmer is the preferred Special since Luna/Moonbow will be less effective against a DEF Ployed enemy, though Luna/Moonbow fit one of her attack lines much better (“One arrow, one kill!”). All in all, a serviceable debuffer archer and a standing buffer during Wind seasons.

This set aims to maximize Legendary Lyn&#039;s unique weapon and her A Skill, Laws of Sacae. If attacked, a Lyn with +Atk will reach an effective 57 Atk before taking any other rallies or buffs into account. With proper team support of Hone/Spur/Drive Atk effects, she can easily pass 60 Atk. Once she is within Vantage range, whether from taking a hit or from another Support skill like Ardent Sacrifice or Reciprocal Aid, her sky-high strength will likely take out any enemy that targets her. When combined with the Heavy Blade seal, she can charge up a very powerful Dragon Fang quickly. This can also be replaced with Aether for healing, though that may take her out of Vantage range. Her C Skill can be changed to anything that would work best for a team's specific needs, but a buffing skill of some sort would work well since she prefers to stay close to her allies. Spd Tactic is used here with the understanding that she can operate well on a mixed Tactics team to boost her stats even more.