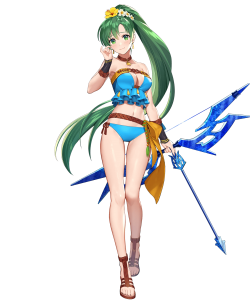 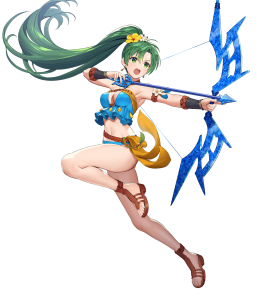 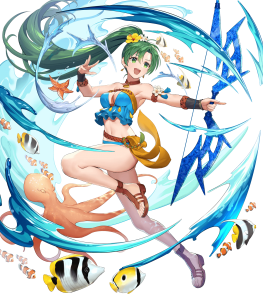 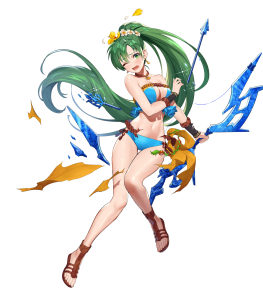 Lyn: Lady of the Beach makes her debut as a blue bow flier, with a respectable offensive stat-line but a relatively unimpressive PRF weapon. Her offensive stat spread of 33/38 offers a decent balance of Attack and Speed to ensure that Lyn can make speed based follow-up attacks. Her defensive stats are less impressive, due to her poor Defense, but Lyn’s middling Resistance can safeguard her from potential OHKO attacks against enemy mages.

Lyn’s most notable feature is her PRF bow, the Deep-Blue Bow, which grants a fantastic combat boost provided her foe is at 100% HP. This is easy to achieve at the start of combat and will only be lost if Lyn fails to KO her target, excluding other external factors such as Duma’s Upheavel or a Bolt Tower in Aether Raids. In addition, this bow also grants effectiveness to both flying and armored heroes in addition to a nice +3 to Speed.

Overall, Lyn is a very competent ranged flier whose biggest drawback is her blue coloration. The benefits of her PRF weapon, namely the hefty combat stat boost and effective damage, widen the range of enemy heroes she can defeat, but common green units with high Defense will still shrug off her attacks. Lyn may find herself in need of additional support if she is to serve as the team’s core offensive hero.

33/38 in Attack and Speed, with the additional +3 from Deep-Blue Bow, offers an impressive stat line that allows Lyn to deliver strong follow-up attacks against many heroes after accounting for additional bonuses. Offensive skills like Death Blow and Swift Sparrow complement her stats perfectly and sculpt her into a fearsome offensive presence.

Deep-Blue Bow offers many helpful advantages including 14 might, effective damage to armored heroes, a passive +3 boost to Lyn’s Speed and a powerful boost to all of Lyn’s combat stats if her foe is at 100% HP. Lyn should have no issues meeting this requirement unless she is deployed alongside counteractive heroes such as Duma, or any hero with AoE damage effects. If the additional effect can be taken advantage of, Lyn’s combat ability improves greatly.

As a flying hero, Lyn: Lady of the Beach can traverse rough terrain that other heroes are impeded by. This allows her to attack enemy heroes from a wider range of positions, improving her ease of use and effective range.

Lyn’s base Defense of 20 offers little advantage: alongside her middling HP stat of 37, Lyn will struggle to sustain any physical attacks at all. Dragon heroes who can target the weaker of her defensive stats upon retaliation will also deal heavy damage.

As a flying hero, Lyn’s inherent weakness to bows can leave her susceptible to OHKO from enemy archers. With her low Defense, even the weakest of archers will deal tremendous damage to her, so she should avoid these engagements at all costs.