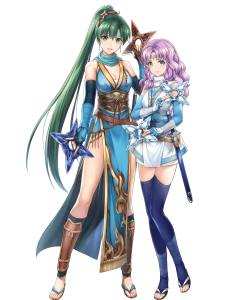 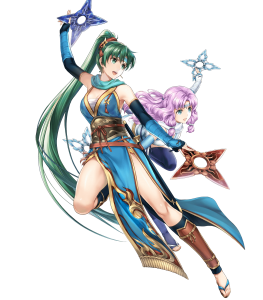 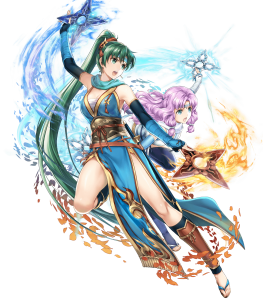 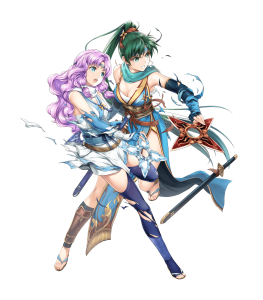 Ninja Lyn’s exclusive Tailwind Shuriken is surprisingly simple and straightforward for a PRF on a recently released unit, yet remains incredibly effective in its intended purpose. Combining both Slaying and Brave effects into a single weapon provides the duo devastating initiations, and the fact that Tailwind Shuriken actually boosts her Speed by an ample amount (as opposed to detracting from it like standard Brave weapons) further augments the duo’s offensive prowess by allowing for relatively consistent quad-attacks.

It’s worth noting that Tailwind Shuriken is currently the only Brave dagger weapon available to any dagger unit at the time of writing; this grants Lyn’s offensive capabilities a distinct edge and quality over the rest of her contemporaries.

Featuring top-of-the-line values in both Attack and Speed, Ninja Lyn inherently sports an impressive inclination towards both dealing damage and performing follow-up attacks. This is not to mention Lyn’s access to a four-point +ATK IV as well, which is particularly noteworthy given how much damage this translates to with a Brave weapon.

Being a Duo Hero comes with several distinct perks, such as phenomenal scoring potential in Colosseum modes (as the duo’s BST will be counted as 190) and the unique capacity to enable Duo’s Hindrance in Aether Raids Defense maps; this is especially notable for Ninja Lyn as her ranged and flying status combined with her sheer offensive capability actually make her a solid choice for Defense teams.

Most importantly, though, Ninja Lyn’s Duo Hero status comes with access to a unique Duo Skill of her own: an on-command self refresh akin to being targeted by Dance or Sing. Although it can only be activated once in a given map (unless she is being used in Aether Raids Offense with the Duo’s Indulgence structure), having the ability to move again without outside assistance provides incredible strategic flexibility when used properly and remains highly useful despite its limited usage—after all, there’s a reason why refreshers are rated so favorably.

Her flying status awards her with further offensive edges in the form of fantastic mobility and the ability to equip movement-based abilities unique to the flier class; this allows for initiations from much more advantageous positions than otherwise possible. She also benefits from the opportunity to use class-exclusive buffs.

With such a notable offensive lean in terms of her statline and exclusive skills, it’s no surprise that Ninja Lyn in turn suffers from mediocre values in Defense and Resistance. This already makes her quite susceptible to enemy fire at base, and the four-point decrease her PRF inflicts on both stats only compounds this. Keeping her out of range from opponents during the Enemy Phase is key to her survival.

Like most other fliers, Ninja Lyn carries an extreme weakness to opposing archers and other forms of flier-effective damage. Coupled with her disappointing base Defense, one should remain especially cautious if archers are on the opposing team as they pose the greatest threat to her longevity.

Ninja Lyn’s flier status also comes with the detriment of horrible skill availability, particularly in terms of B slot skills such as the Lull line. This in turn limits her build flexibility and overall potential by a marked degree compared to her non-mounted counterparts who do have access to them, though her sheer offensive lean allows her to keep up nevertheless.