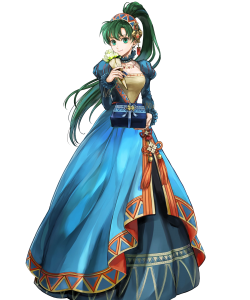 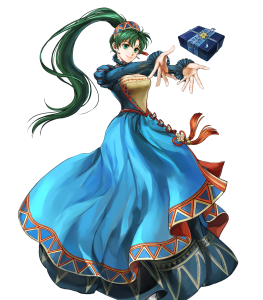 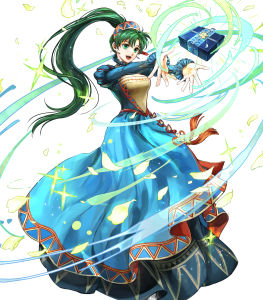 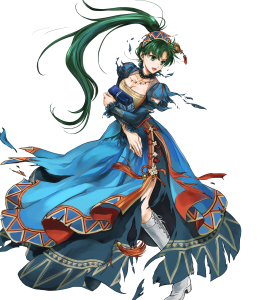 Lyn's greatest strength is her ability to run strong Player Phase and Enemy Phase builds simultaneously. Bold Fighter is an incredible skill, which allows Lyn to guarantee follow-up attacks against the majority of enemy heroes. This synergy with the Quick Riposte 3 seal makes her a formidable opponent on either phase. If Bold Fighter is unavailable, Desperation 3 is a passable alternative, though Lyn (LA) will need more points in Speed through her boon stat and weapon refinement.

Lyn (LA) has a major choice to make when it comes to which tome she should use. Both have their advantages: Blárowl+ synergizes well with other armor units due to their limited mobility and provides strong offensive and defensive boosts. Blárblade+, on the other hand, provides awesome offensive power, especially if used alongside Hone/Fortify Armor buffs. Blárowl+ is generally the stronger option because Lyn greatly benefits from the extra HP and Spd or Atk that the refinery grants.

Lyn's C slot is relatively flexible, but Armor March 3 makes the most sense. Not only is it already accessible as part of her base kit, but she will always want to benefit from the additional movement.

With access to Special Fighter, Lyn (LA) is a fantastic candidate for an armored duelist. +SPD and a +Spd forge on Blárowl will grant Lyn (LA) a reasonable 42 Speed, which is significant in enabling a useful Player Phase role. Without Bold Fighter however, Lyn will find herself relying more on her Enemy Phase strength.

The armor-exclusive B skill grants a powerful boost to Lyn's offensive and defensive capability through its impact on Special attacks. Considering the improved Special acceleration, longer-cooldown skills such as Aether or Glacies are the best option. Aether is particularly useful in keeping Lyn above the 70% threshold for Quick Riposte. Close Counter provides good scoring bonus as well as improved combat flexibility by allowing Lyn to retaliate at 1-2 range. Armor March appears in her base kit and can improve her offensive power so long as she has an armored ally, though possible alternatives include an Atk or Spd Wave skill or Ward Armor.

Quick Riposte is highly recommended to ensure that Lyn can still make follow-up attacks against faster enemy heroes during the Enemy Phase. The guaranteed two attacks make it easy for her to charge her Special skill more quickly thanks to Special Fighter.

Lyn is arguably stronger as a defensive unit rather than an offensive one, and this set aims to capitalize on that. Blárowl+ is the stronger of the two aforementioned tomes in this build, as it is the only one of the two to grant defensive stats in addition to offensive power. Iceberg or Glacies are the recommended specials, especially if Lyn (LA) has a Resistance boon.

Lyn's weapon refinement is relatively down to preference, but +Def is recommended to improve her mixed bulk. With a Defense boon, a +Def refinement puts Lyn (LA) at a mixed Def/Res spread of 33/34 before buffs.

Close Counter is quite necessary to ensure that Lyn can retaliate against every enemy hero she encounters, whereas Guard ensures that she cannot be burst down by a special skill. Vengeful Fighter 3 could be run in place of Guard, but the existence of the Quick Riposte 3 seal makes this a heavy investment which would be better used elsewhere. If Vengeful Fighter 3 is used in the B slot, Lyn's new best choice in seals is Close or Distant Def.

Lyn's C slot is relatively flexible, but Armor March 3 makes the most sense. Not only is it already accessible as part of her base kit, but she will always want to benefit from the additional movement.

For those wishing to use Lyn (LA) purely offensively, her skill requirements become a bit more lenient. Blárblade+ becomes the stronger choice of the two aforementioned tomes due to its offensive superiority, whereas Close Counter is replaced with a more offensive skill. Atk/Spd Bond is the budget option, but also the stronger option for those striving for pure offense. Life and Death 3 does not have the same positioning requirement, but the trade-off is a -5 to Defense and Resistance.

Desperation 3 is arguably more desirable than Bold Fighter, since the former skill allows Lyn to avoid retaliation from the enemy hero she attacks. The rest of her skills are relatively flexible depending on the rest of her team.

Lyn's fourth appearance in Fire Emblem Heroes is one of her stronger incarnations. 36 Speed makes her the fastest armor unit in the game as of the Lovers' Abound update, and the rest of her stats don't fall short either. 31 Attack is extremely workable for offensive builds, whereas a defensive spread of 27/34 gives her impressive mixed bulk. And contrary to her appearance, Lyn (LA) is an armored unit, giving her access to an impressive array of skills including Bold Fighter and Vengeful Fighter.

The only area where Lyn (LA) really falls short is her HP pool. 37 base HP on an armored unit is quite poor, though this is easy enough to remedy. The extra HP from weapon refinery as well as her high Speed and mixed bulk make Lyn (LA) an impressive defensive unit despite her poor base HP.

Lyn's role primarily depends on the rest of her team. She can run both Player Phase and Enemy Phase builds with great success, though she will be more reliant on Armor March or support skills from teammates to compensate for her 1 movement. Overall, a phenomenal unit that is made even stronger by her access to powerful, armor-exclusive skills.

"The nomads of the plains do not abandon their fellow tribespeople. Eliwood and Hector are my dear friends..."

Lyn (LA) boasts a solid offensive statline of 31/36, before stat variation, skills and so on. This is a great foundation, particularly given her access to strong, stat-boosting tomes including the Blárblade+ tome or Blárowl+ tome. These stats are also crucial in improving her defensive role: her high Speed ensures that Lyn (LA) can easily avoid follow-up attacks, whereas high Attack allows Lyn (LA) to pick up KOs when retaliating.

Lyn's classification as an armor unit is a huge boon: she benefits massively from armor-exclusive skills such as Bold Fighter and Vengeful Fighter, as well as Hone/Fortify/Goad/Ward Armor buffs and a hefty boost to her BST.

While 27 Defense doesn't seem particularly impressive at first glance, it becomes much more significant alongside Lyn's high Speed and impressive 34 Resistance. Not only does Lyn's Defense stat play an important role in her survivability against physical units, but it also guards her against heroes that target the weaker of the two defensive stats, namely dragon units.

Though Lyn (LA) is somewhat reliant on Close Counter, just like her predecessor Halloween Henry, the vast array of tomes at her disposal makes her incredibly potent. The obvious choices are the Blárblade+ tome or Blárowl+ tome: both synergize exceptionally well with Armor buffs and the Blárowl+ tome, in particular, can mitigate Lyn's movement penalty. Other options are well worth considering, however, such as a Blárraven+ tome.

As mentioned above, access to tomes and armor skills makes Lyn incredibly versatile. Bold Fighter and Vengeful Fighter set her up for stellar Player Phase and Enemy Phase builds respectively.

Lyn's biggest weakness is her poor mobility. Lyn can only move 1 tile per turn, which greatly hinders her ease of use as an offensive unit. This can be mitigated with Armor March, but will limit team composition.

Lyn also suffers from a weakness to anti-armor weapons. While she can inherit Svalinn Shield to mitigate this weakness, it is not recommended over Close Counter, which Lyn (LA) desperately needs for strong performance on the Enemy Phase.

Lyn's high Speed and reasonably strong defensive stats make her a strong defensive presence, but her base HP is relatively weak. This can be remedied with weapon refinery and merging, but compared to other armored units, her HP pool falls short of expectation.

Lovin' my girl Lyn since I decided to put Fury 4 on her. Ok I loved her before, but she only shone in certain situations. Fury 4 works very well on her for a couple of reasons. Firstly, she benefits from every stat completely, and the extra speed goes really well with Special Fighter. Secondly, her low health pool means it is really easy to activate skills below 80-75%, such as Brazen Atk/Def which I chose here because this could give her another +12 effective damage on her 2nd encounter thanks to Blarblade AND it bulks her out to handle DC blowback.

The C skill is the most versatile, of course and I choose cookie cutter Res Ploy here but you may want something different based on your team.

This build is for Aether raids. She's setup to avoid panic ploys and Aversa (for the most part) which is why she has an HP seal.
She's also meant to be mixed phase. But honestly this defense Boon seems pointless after weeks of testing. xD

Will most likely switch to +SPD and finally +10 her!!

LA!Lyn provides a mobility option and red counter for LA!Hector, while also being the only magic damage threat. CC gives LA!Lyn a way to counterattack when beset by armors with low res stats.

LA!Lyn is a great player phase and enemy phase unit. With a speed boon, her speed becomes an astonishing 39. In an armor team, LA!Lyn would perform best with a speed refined Blarowl+ tome. Aether allows LA!Lyn to stay around longer while also boosting damage dealt from her attacks.

Close Counter allows her to fend off against melee units during enemy phase. Her B skill, Special Fighter 3, synergizes well with her high speed and Aether, as she will be able to double most units enough to charge her special. Her innate Armor March 3 can be used to support other armor units.

Despite LA!Lyn's high speed, she may struggle with doubling units such as Ayra, Brave!Celica, and Karla, so a Quick Riposte seal can cover that weakness.

This build aims to maximize her Player-phase capabilities. When initiating, she will hit with 49 attack and an automatic follow-up thanks to Bold Fighter. Combined with the low cooldown Moonbow, she will activate it every battle, KOing virtually every red unit and a good number of low-res blue units. With a whopping 39 speed, she will also prevent follow ups on enemy phase. Her ok defense and respectable res means she will be able to survive almost any attack that comes her way (just watch out for units that also have Bold Fighter or Blue Tomebreaker). As for choice of Tome, Blarowl+ is chosen because of the great boost she gains from adjacent allies, which is easy because armored units usualy stay close to one another.
For Seal, I would go with Attack +3 or Quick Riposte to give her an edge on enemy phase and possibly secure a few more KOs.

Tome alternatives: Blarblade+ (goes hand-in-hand with Att/Speed Bond, but note the slower cooldown, so activating Moonbow every battle will not be a reality)
Juice Wave+ (compliments Bold Fighter very well, but without the stat boost from adjacent allies)
A-skill alternative: Swift Sparrow or Att/Speed Bond
B-skill alternative: Desperation (if you choose to run a +spd tome refinement)
C-skill: keep as-is