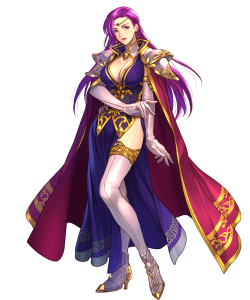 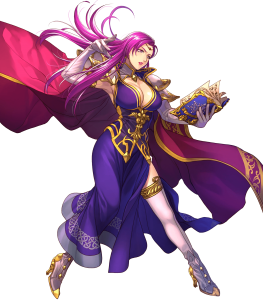 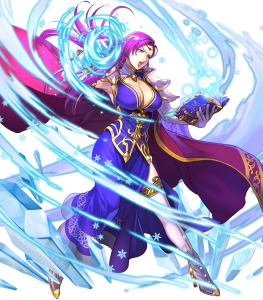 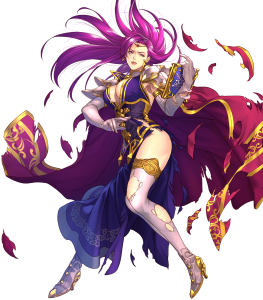 An Act of Devotion and Courage (Ranged Tank)

Brunnya’s personal weapon, Fimbulvetr, allows her to shine amidst her Blue Tome peers.

This allows Brunnya to become an excellent Player and/or Enemy Phase unit. Penalty neutralization is very significant in Aether Raids, where penalties from Bright Shrines, Dark Shrines, and Chill skills are very prevalent.

As an Infantry unit, Brunnya has access to several great skills, including Special Spiral, Null Follow-Up, and Null C-Disrupt.

Fimbulvetr, status as an Infantry unit, and access to alternative Blue Tomes such as Tannenbit, Flora Guide, and Spooky Censer allow Brunnya to be a very flexible unit capable of fulfilling multiple roles, even at once.

As a Tempest Trials+ unit, all players had the opportunity to receive 1 4-star copy and 1 5-star copy of Brunnya. In addition, Brunnya can be obtained via Heroic Grails rather than Orbs, which is a blessing for many players.

While F2P units formerly lacked access to IVs, with the addition of Trait Fruit, players can feed their units 100 Trait Fruit to change their IVs however they’d like.

While none of Brunnya’s stats are outright bad with the exception of Defense, they also fail to stand out on paper. 42 HP, 35 Attack, and 33 Resistance are all decent, but not notably high, and 31 Speed is very middling for today’s standards. Thankfully, Fimbulvetr significantly helps with patching her statline, as +4 to all stats and debuff neutralization can make Brunnya deceptively strong, fast, and bulky.

If players missed Brunnya’s Tempest Trials+ event, then they will need to use Heroic Grails to begin to build Brunnya as opposed to potentially having a +1 Brunnya before spending. In addition, players that are already investing into another unit that needs to be merged via Heroic Grails may find it more difficult to justify building Brunnya.

As a significantly more budget friendly build option, considering the availability of Divine Codes, here is yet another build for Brunnya that will hold up as effective, while stretching out her capacity to act as a tank, albeit not to the same degree as giving her much more premium investment options.

Considering the B skill and seal with this build, Moonbow is a reasonable 2CD special that can be changed out for any of the other 2CD specials as you see fit.

Spd/Def Solo will shore up the stats that are arguably the most important for building her up as a tank. An alternative, if you are willing to not have the skill active during the first combat, would be Brazen Spd/Def, though Spd/Def Solo is available for 2400 total Divine Codes along the Radiance/Tellius path in the compile menu, while Brazen Spd/Def must come from a promoted copy of Norne.

Special Spiral is available for a net total of 4000 Divine Codes along the Holy War/Jugdral path in the compile menu. Spamming specials is going to be important for Brunnya, once she gets going, especially on a more budget friendly build.

Atk Smoke can be gotten from Kaze, and is a good generalist C slot if you don't have other more premium options available. It will also help with stretching out her ability to act as a tank.

Finally, Renewal, for the seal. Giving up a healing special means that it's going to be important to protect her longevity, and Renewal is going to be a strong option for doing just that.

This is a very high investment build, but also one that is exceptionally effective. Brunnya is the type of unit that will give you greater returns proportional to the investment given. A nice bonus to this build is that it doesn't directly use any visible buffs on Brunnya herself, meaning that she doesn't have to worry about Lull or Dull skills neutering the effectiveness!

Starting off, Fimbulvetr. This tome is what defines Brunnya's performance capability as a unit, and the debuff immunity that it provides, protecting her even from the deadly effects of Blizzard, derivative weapons, and the Dominance status buff. It's also her prf weapon, meaning that there's no cost for her learning it, assuming you kept the five star copy from when she was initially available. The only weakness that this tome has, when it comes to covering options, is out of combat damage, including that from AoE specials. Pulse Smoke, listed below, helps mitigate that issue to a significant degree.

Movement assists are flexible, and Reposition is one of the most common for a reason. Use what you wish.

Sol. Why Sol? It provides better healing than Noontime, with the drawback of slightly longer cooldown. Brunnya is also capable of stacking up stats to a significant degree, meaning that, when she does have her special ready, she's liable to heal a significant portion of any lost HP.

Now we're getting into the high investment portion of the build. Atk/Spd Push 4 is the most common level four Push skill, and it has fantastic synergy with Fimbulvetr, dropping her below 100% HP after her first round of combat. Thus, she then gets +11/+11/+4/+4, purely from using this skill once. Considering that the peak of Brunnya's performance comes in Aether Raids, it's also fairly likely that she's being granted support in the form of blessing boosts. Naga and Mila are fantastic with Atk/Spd Push 4. An alternative that is significantly more premium, however, is Atk/Def Push 4. This is also much more viable when stacking Spd on Brunnya, as it still bolsters her defenses. Additionally, Push skills do not inflict any recoil damage if she doesn't attack, meaning that the stats gained from the Push skills are always there, so long as she's above 25% HP.

Lull Atk/Spd 3 is one of the best options for a B skill that Brunnya has. Three points of effective Spd are granted by having this skill equipped, as well as effectively three more points of Def/Res. There are plenty of other options available, considering her movement type, and the oodles of goodies with which she gets to play, but this skill will stretch out her capacity as a tank to a rather significant degree.

Pulse Smoke, so long as you don't recklessly charge in turn one, assuming you're using Brunnya on offense, shuts down a significant number of formations, and also protects her from quite a large amount of damage. Specials are one of the greatest sources of potential damage, and Brunnya is no exception to that. This will help ensure that she isn't being slammed too hard by them.

Brazen Atk/Def is yet another means of shoring up her defense, and it works as both an emergency buffer, just in case she falls below Push range, as well as an augment to her damage output, so long as she's able to remain between 25% and 80% of her HP. Alternatives include Atk Smoke, which can't be turned against her so long as you're using Lull Atk/X, and any stance skill that shores up her Def stat even more, as it is her weakest point in many encounters. When the eventual Brazen Spd/Def seal comes out, that can be used instead of Brazen Atk/Def, to grant her yet more security against faster units while also providing some emergency Def points.

A great generalist build that works during both phases and makes the best out of Fimbulvetr’s penalties immunity thanks to Bonus Doubler. By stacking as much stats as you can, she can be used as a baiter, nuker or tank. Chill skills and JHA allow her to be an excellent support as well.

Note that if you have other units to debuff the enemy, Special Spiral can make her even more dangerous, paired with Spd/Res Bond for the Sacred Seal.

Personally, I am enjoying this build quite a bit. Apart from tanking extreme physical threats, she has been great against A LOT of enemies.

This build complements her strengths, high resistance allowing her to hit Sabotages and Ploys reliably at 41 when accounting for the +1 merge and +5 Flowers. Her ability to gain +4 to all stats and nullify penalties on her when she is debuffed or when below 100% HP makes Fury 3 a strong A slot for her. The debuffs she can throw back at the oppenent adds to her survivability and offensive power, allowing her to be a strong threat in AR, putting her stats at a 57/38/29/45 in combat if Fimbulvetr is active. Thrasir makes a great teammate with debuffs of her own and the recoil effect on Ifingr gets Brunnya's Fimbulvetr going.